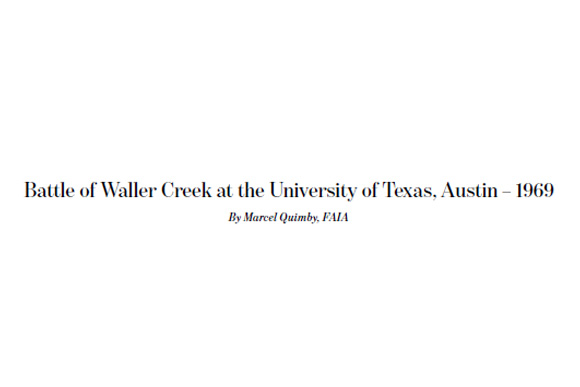 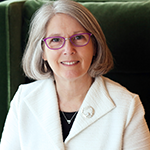 Battle of Waller Creek at the University of Texas, Austin

The year 1969 is largely remembered as a year of protests. They started with demonstrations against Richard Nixon’s inauguration in January and included a National Day of Protest against the Vietnam War that drew crowds at universities and cities across America on Oct. 15. That day, an estimated 100,000 people in Boston, up to 500,000 in Washington D.C., and tens of thousands of students and faculty at the University of Texas’ Main Mall showed up in dissent.

Protests that year also demanded environmental protection after an oil spill off Santa Barbara, California, and the Cuyahoga River caught fire in Cleveland from chemical pollution; they helped lead to the Clean Water Act in 1972. Conservationists’ opposition to a planned Disney ski resort in the Sequoia National Park culminated in a 1972 U.S. Supreme Court decision siding with a Sierra Club coalition.

The Stonewall riots, sparked by a June 28 police raid on a New York gay bar, would usher in major social changes in the following decades.

In Austin, the Battle of Waller Creek at the University of Texas was also a harbinger of the future, uniting architectural students, environmental activists, and the student body in bringing changes to the university and creating expectations of public involvement in communities across Texas and the country.

Waller Creek, lined by magnificent cypress, live oak trees, maple, and pecan trees, forms a natural corridor within the busy campus. Many of its trees, planted the 1920s through 1940s, owe their existence to John W. Calhoun, a UT professor who became the school’s comptroller and president. The 27,000-seat War Memorial Stadium, renamed in 1996 for legendary football coach Darrell Royal, was built across the creek in 1924. Its location defined Waller Creek and the adjacent San Jacinto Boulevard as the eastern edge of the educational core of the campus.

Architect Paul Philippe Cret, in his 1933 Plan for Future Development of the campus, envisioned the creek remaining in its natural state between the educational buildings and the athletic fields to the east. Despite the tremendous growth of the student population and a burst of new buildings after World War II, the administration had made no efforts to protect Waller Creek in any way – either by updating Cret’s plan or making a new master plan. This lack of action would later contribute to this unfortunate event.

Events leading up to the ‘Battle of Waller Creek’, October 1969

In 1965 the UT Board of Regents, led by Chancellor Frank Erwin, considered demolishing the football stadium and constructing a larger one off campus. Students and alumni immediately and strongly objected, and the plan was abandoned. The regents and administration then planned a narrow expansion on the stadium’s west side to accommodate the physical education and intercollegiate departments, with the roof supporting an upper deck of 12,000 seats (it actually became 15,000). This 1968-69 plan accomplished what the regents couldn’t in 1965 — a larger stadium of 78,000-plus seats to accommodate a powerhouse collegiate football program that won the Southwest Conference championship in 1968.

Unfortunately, this plan included the relocation and widening of San Jacinto Boulevard 65 feet to the west that would cantilever over Waller Creek, requiring the removal of at least 39 live oak and cypress trees and changing the creek bed into a concrete channel.

This stadium expansion and the changes to Waller Creek were planned, an architect hired, contract documents completed, and construction bids sought by the regents and administration without student, faculty, or public knowledge or input. Only when The Daily Texan, the student newspaper, published an article about the changes in early October 1969 did the public find out.

There was an immediate uproar by students and faculty. Letters poured into the newspaper objecting to the destruction of the creek’s natural setting, the loss of the majestic trees, the fait accompli approach to the project without opportunity for student input. Architecture students debated the issue; several developed alternative designs on relocating San Jacinto Boulevard without disturbing the creek, which The Daily Texan published.

Neither Erwin nor the university administration responded to the campus-wide outrage. Beyond campus, the Austin American-Statesman and other Texas newspapers carried articles about the heated debate.

Architecture students were angered that they weren’t involved in shaping the campus’s future and then had only two or three weeks to voice their objections once the plans were revealed.

This insular approach was contradictory to their curriculum. The dean of the School of Architecture, Alan Taniguchi, embraced a socially conscious approach to architecture and the environment. He supported the students’ efforts and their requests to talk with the university’s administration. Among the students who took part in the public discussions were Jon Thompson, president of the UT Architectural Council; Kirk Hamilton, architectural representative of the student government who served on its Grounds Committee; and David Watkins, Joe Freeman, and Scott McCreary. Students from other majors — biology, science, and law students in particular —also opposed the destruction of the creek and its trees and joined the discussion.

A San Antonio contractor had already been hired for the project, and word got out about a work order to begin construction by the month’s end. The students were on alert that the destruction of the trees and irreversible damage to Waller Creek would soon occur.

The Daily Texan and Austin American-Stateman stay on the story. As the discussions take place, the contractor removes five trees on the east side of San Jacinto Boulevard where the building expansion is planned.

Contractors arrive, prepared to cut trees along the west side of the creek. When they move toward the creek, dozens of students carrying signs stand in front of the creek to protect the trees. At the direction of the vice president for Student Affairs, the contractor ceases further clearing while awaiting word from President Norman Hackerman’s office. Some protesters spend the night in the trees in case the contractors return after dark.

In a separate effort, law students, two botany professors, and the Sierra Club file for a temporary restraining order to halt construction.

By sunrise, more students and other protesters begin arriving, while several hundred others watch from nearby. Students who spent the night in the trees remain in place; others sit or lie on branches. When contractors arrive, the law students present the temporary restraining order, which is pending until the judge rules after 10 a.m. The bulldozer operator says he doesn’t want to cut the trees either, steps off the bulldozer, and waits.

Erwin, visibly irate, arrives at the site and calls campus police, Austin police, state police, and firefighters to bring ladder trucks, ladders, and safety nets to remove and arrest the protesters in trees — despite the pending restraining order.

The last protester, a female student, perches at the top of an estimated 50-foot-tall cypress tree. Student Larry Grisham later tells the Harvard Crimson that police almost knocked her off the branch, leaving her dangling by her hands. In all, 27 people are arrested, and police shoo away others.

Erwin tells the bulldozer to start work on the trees, adding, “Get the big ones first.” The large trees fall as hundreds watch.

Students form a procession, dragging the severed limbs from the creek, across the campus and down the South Mall to the Tower, where Hackerman offices. They pile the branches against the loggia’s locked front doors.

The students demand an audience with Erwin, and he agrees.

Meanwhile, the restraining order has been approved, but the trees are already broken and lying in Waller Creek.

Erwin and a student delegation meet, with reporters present. Hamilton, the architectural representative of the student government, tells Erwin, “This really isn’t about trees. It’s about the absence of planning on one of the most important and beautiful campuses in the country.” Erwin says the stadium follows the campus’s master plan. Hamilton responds that there has not been a master plan since the 1933 Cret plan. The meeting ends with Erwin making no more commitments on Waller Creek.

The students gain one concession: Hackerman says the university will not build a concrete channel at this portion of Waller Creek.

At a Clean In, Plant In at the creek, students, and volunteers plant 75 trees donated by Austin nurseries. Shrubs are also planted, stone walls repaired, trampled creek beds leveled, and brush and rubble removed by a large group, some singing folk songs and passing the hat for donations. Students passing by on their way to the football game cheer on the efforts.

Quickly dubbed the Battle of Waller Creek, the protest endures through photos of the students pulled from trees and of their leafy procession to the Tower’s front doors, and through coverage in newspapers and in TV reports nationwide.

Although the students appeared to have lost the battle, several positives resulted:

- The university has embarked on several collaborative master plans for the campus, including the Waller Creek Framework Plan in 2019.

- Waller Creek, now viewed as an asset, remains intact. The university and the city of Austin have plans for preservation and trails.

- The students’ strong desire for a voice in changes to the campus was heard, with more participating in such efforts.

- The protest served as a catalyst for environmental activism in Texas and beyond.

- At the time of the protest, funds had been allocated for a new School of Architecture building east of the main campus. Those funds were rescinded over Dean Taniguchi’s support of his students during the protest and his public stance against the Vietnam War. The school remained in Battle Hall, which Taniguchi told Texas Monthly in 2015 was a blessing in disguise: It stands in the coveted center of the campus instead of in a remote location.

The protest highlighted the divide between Erwin and Taniguchi in ideology. Erwin was a polarizing personality and worked to mold the university in the image he chose. He didn’t tolerate opposition and dismissed faculty members, including Hackerman in 1970, who did not share his views. Although Erwin was committed to the university, his actions became out of sync with the times. He was removed as chancellor in 1971 and from the Board of Regents in 1975.

Taniguchi resigned from the university in 1972 to serve as dean of the School of Architecture at Rice University. Upon retiring, he returned to Austin. In addition to being a remarkable architectural educator and mentor, he was committed to Austin’s inner-city revitalization, working on the Town Lake master plan and Waller Creek trail plan, and serving on planning, historic preservation, and environmental boards. He received AIA’s Whitney Young Award in 1997 for his advocacy and efforts against inequity.

The story of the Battle at Waller Creek serves as a badge of honor not only for its participants in 1969 but for the university students who follow. For the protest’s 50th anniversary last year, the UT School of Architecture recounts the story in its film The Battle of Waller Creek.