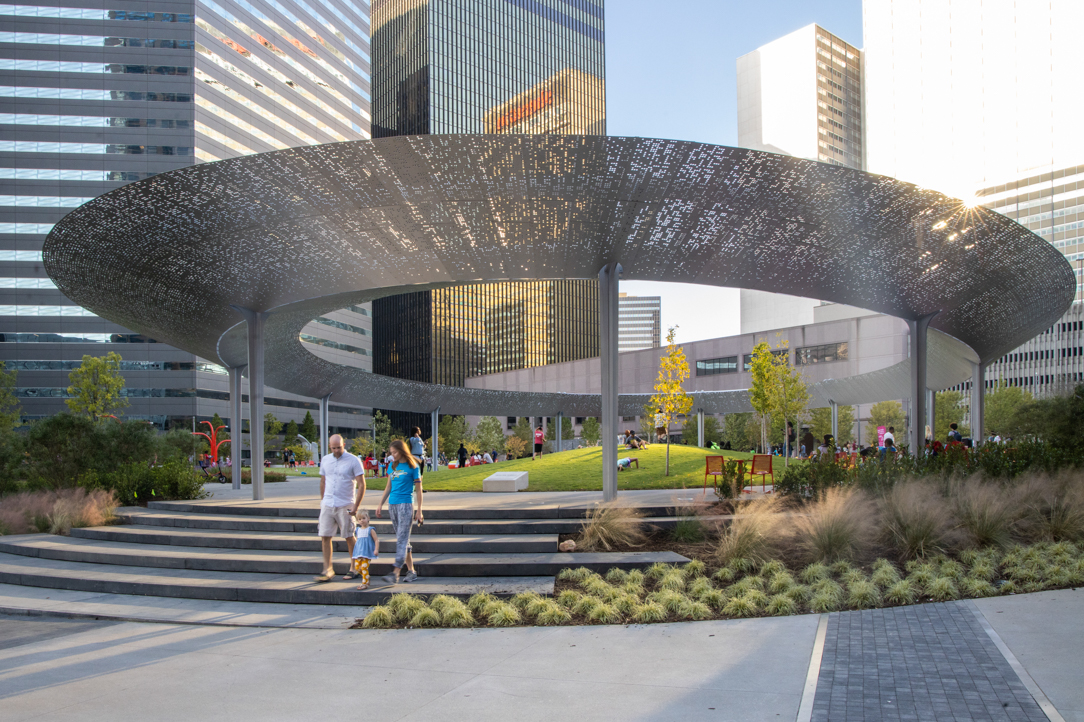 A simple ellipse featuring hundreds of V-shaped fins that support trapezoidal perforated steel panels, Pacific Plaza Pavilion sits roughly 15 feet above ground, supported by 11 cruciform columns. Its 58,290 perforations present a glimmering record of the 337 train stops along the Texas & Pacific Railway and the telegraph codes used to identify them. In that way, the pavilion pays homage to the history of place and the complexity of a language that ensured the smooth movement of trains from 1871 to 1976.

The first of four upcoming downtown parks, Pacific Plaza demonstrates the power of leveraging private dollars to transform the city through public works. Its story began when the site, then a parking lot, was identified as a potential park in the 2004 Downtown Parks Master Plan. But it remained a parking for the next decade until Parks for Downtown Dallas approached the city with its ideas for the park.

Early in the 1990s, only 200 people resided downtown. Now, with 12,000 people living in the city center, residents want an environment of work life/balance and companies want to enhance the culture. It’s become clear that places of respite are essential to the city fabric.

PfDD sought to form collaborative relationships between the public and private realms. With three more parks in the works, it advocates building a robust network between existing and upcoming parks, each with its own unique experience.

Led by SWA Group, PfDD, and the city of Dallas, public events solicited community ideas to drive the design of the park. At the top of that list: a shady respite from Texas’ sweltering summer sun. HKS LINE, the firm’s innovation team, got the job of designing the pavilion in a park envisioned as part refuge, part iconization of place.

Building parks in downtown Dallas comes with the caveat that there is almost always contamination [l1] history. While conducting that research, SWA Group unearthed the story of the railroad tracks and subsequent stops. This inspired the park’s aesthetical theme, which can be seen incorporated in the concrete, colors, and patterns. 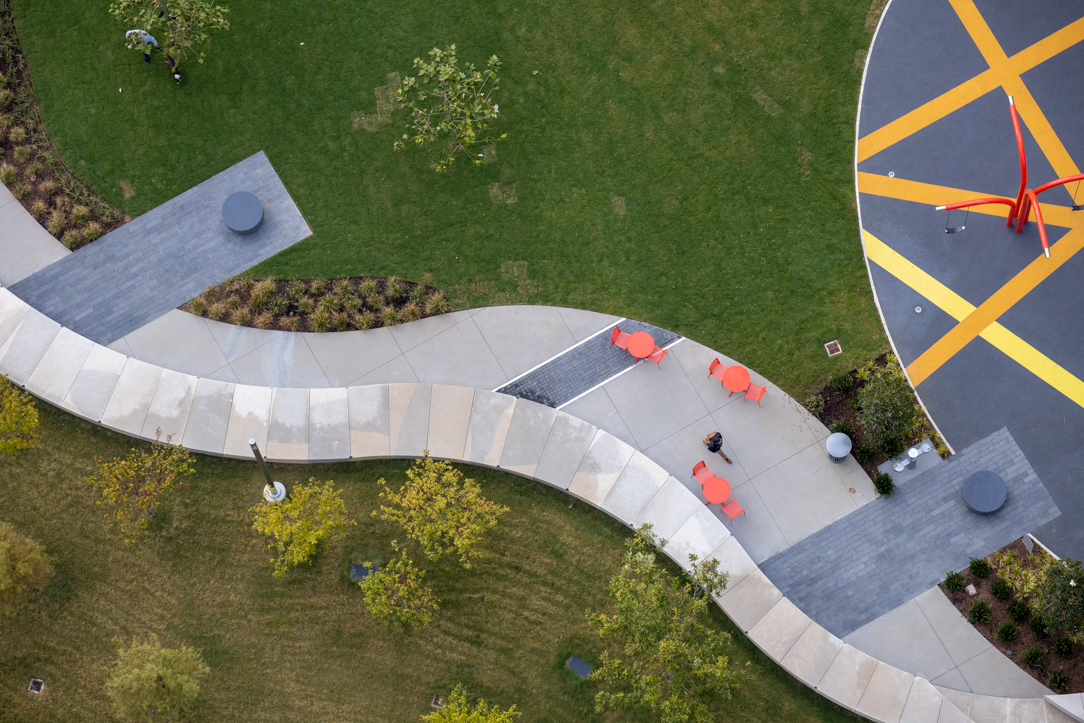 The gradient design starts out solid at the base of the pavilion cladding and grows more porous at the top – it is also a pragmatic solution that prevents people from climbing the structure and yet still engages visibility from various peripheries. 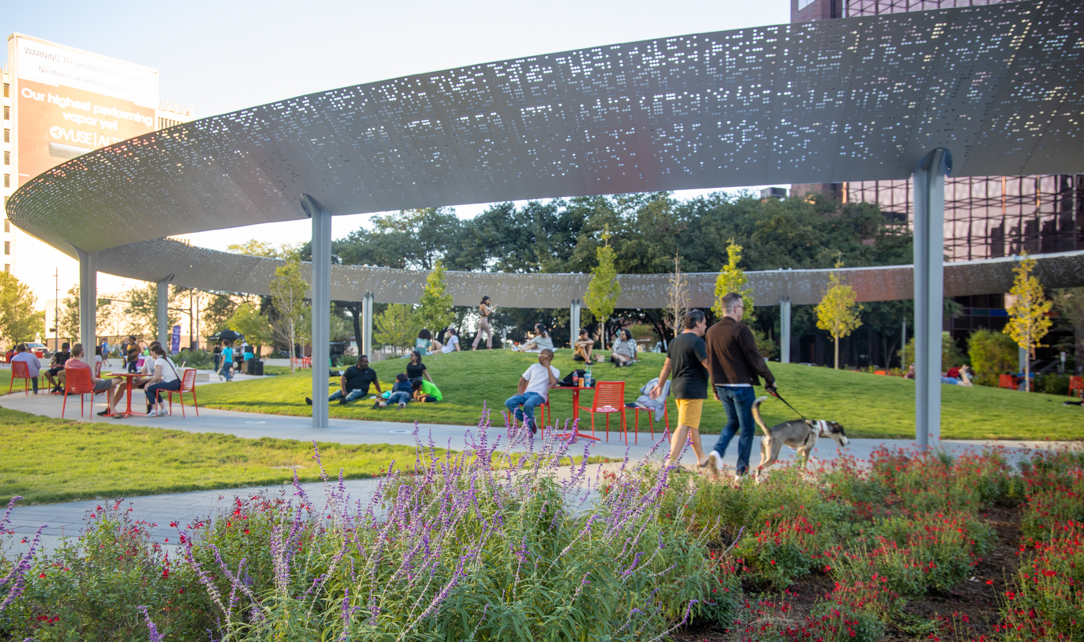 A highly designed, functional, and lush park in the midst of high-rises, Pacific Plaza aims to inspire the public.

Dallas has a thriving core that will continue to grow. Developing greenspace not only enhances the health and wellness of occupants, but also their safety and the quality of the air they breathe. It’s a place for families who don’t have access to lawns or nearby parks to come and give their children the joy of nature and playing outside. It’s a place for people from walks of life to find respite. It brings our community closer. In the end, it is a social justice endeavor. 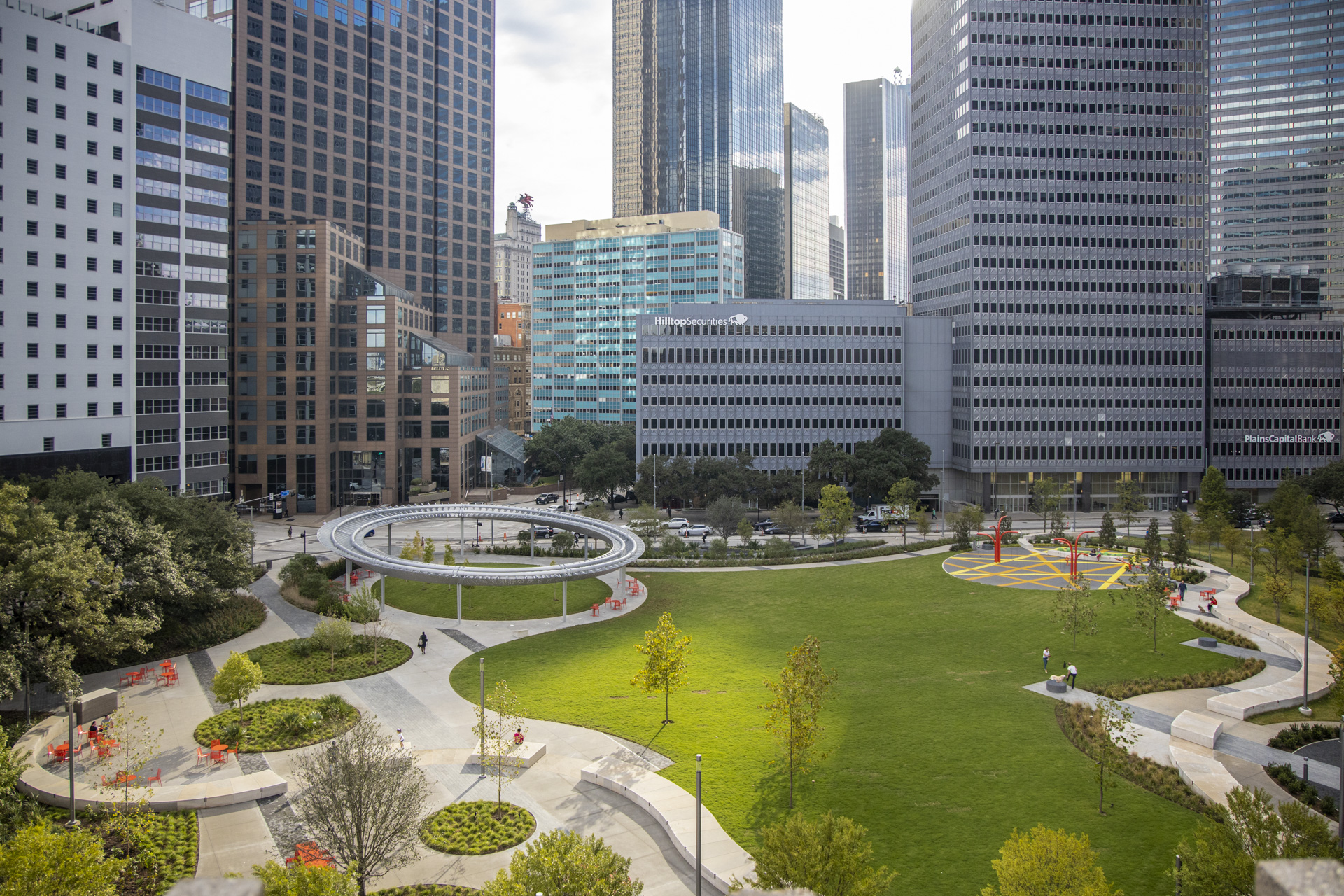 Shahad Sadeq, Assoc. AIA is an architectural designer at SmithGroup.

[l1]I’m unclear on whether they literally found RR tracks in the process of digging up earth to see if there were toxic substances.