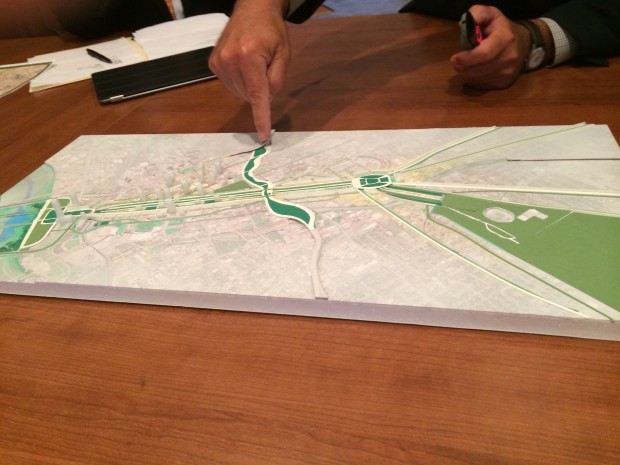 This is such an important conversation! Our transportation systems are about connecting people and opportunity not just about moving vehicles. A transportation plan that considers the need for infrastructure and also the long term impact on land use opportunities and quality of life is important for the future of Dallas. This kind of thoughtful discussion is what is needed to turn "what if?" into WOW!

What If? – An Architectural Possibility for I-345

For over 30 years I’ve lived in East Dallas and worked in Uptown and Dallas’ Central Business District. Throughout my career, I’ve designed architectural projects all over the world. But I live in Dallas and spend my local time within a five-mile radius of Dallas’ urban core. I’ve enjoyed Deep Ellum, Fair Park, The Arboretum, White Rock Lake and the many amenities East Dallas has to offer. My home neighborhoods have included Lower Greenville, Hollywood Heights, Bryant Place and Lakewood.

Last year, HKS committed to relocating our offices from Uptown to 350 N. Saint Paul Street in downtown Dallas. We redesigned a 1970’s IM Pei-designed office building into a LEED Platinum workspace planned to foster our creativity, create a meeting space available to the public and support the revitalization of Dallas’ Central Business District. As the new president and CEO of HKS, a top-ranked international architectural and design firm based here in Dallas, I find myself increasingly drawn to making my hometown a more livable and connected city.

HKS Chairman Ralph Hawkins and I have had conversations with D Publisher Wick Allison about building momentum to bring I-345 to grade, replacing the multiple lane overpasses with a street-level parkway and reconnected streets, a key to revitalizing neighborhoods that encourage walking, biking, local retail, entertainment, increased density and a more-vibrant urban core for all Dallas residents.

For those of you who don’t recognize where I-345 is, there are no signs to mark it. The 1.4-mile-long freeway connects I-45, ending at the intersection with I-30 with U.S. Highway 75 at Spur 366 (Woodall Rogers Freeway).  It’s the highway that moves much traffic up and over downtown and to other highways. I-345 forms a natural barrier between East and South Dallas neighborhoods and between Fair Park, Deep Ellum, Baylor and downtown Dallas.

Working with our Urban Planning Group Director, Randy Morton, who leads our planning efforts from New York and brings an objective view to the party, we set out to design a “what if” solution for I-345. But as we took a step back, being designers and conceptual thinkers, we couldn’t ignore the bigger idea, expanding the assignment to a grand vision that connects Dallas in a broader way, one that links people and places from the Trinity River back to the present I-345 and onward to connect Dallas neighborhoods with area attractions, major centers and our great public parks.

In our exercise, we did not deal with political considerations, budgets or existing ideas. We realize these would be significant in a long-term plan. Our efforts grew to look at an overall inclusive vision that removes many barriers and makes stronger connections to our urban core. We hope this stimulates discussion and adds to the conversation already underway.

Ralph Hawkins presented our concept for a Dallas Connector to the editorial board of The Dallas Morning News recently.  Mark Lamster, the newspaper’s architectural critic, wrote a column covering it. He was excited about connecting downtown Dallas to Fair Park to Samuell Grand Park and beyond. Yet, he noted that it might cause controversy with existing plans. My hope is that it fosters discussion and thinking about Dallas’ “what ifs.” What if Dallas moves forward with fewer preconceptions and more emphasis on connecting the places and the people who choose to live here?