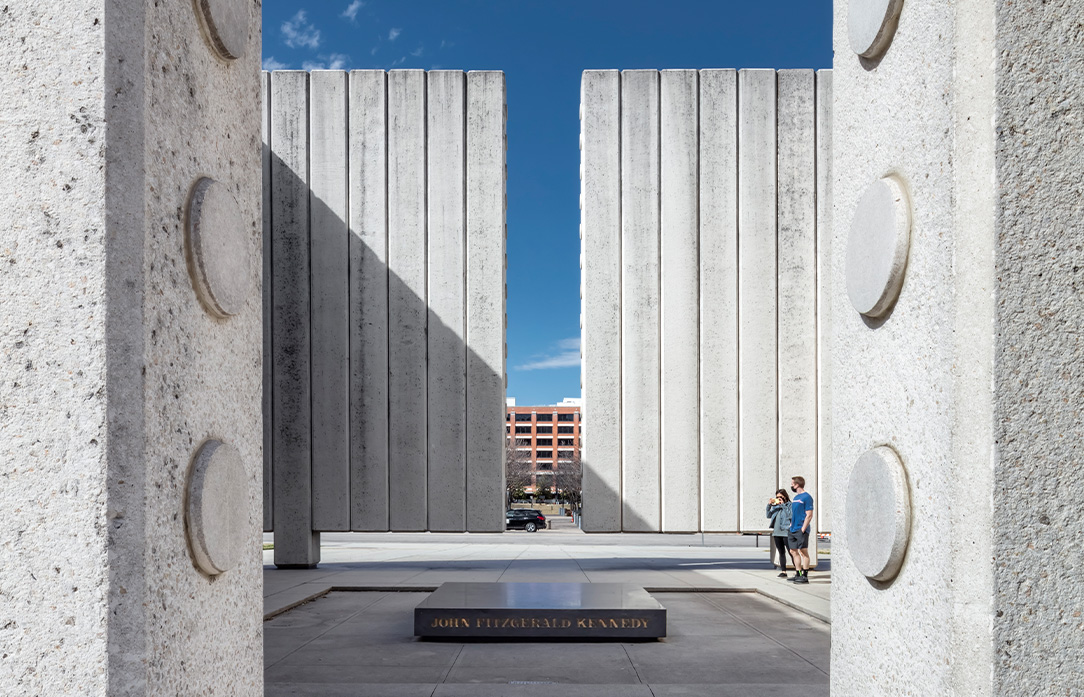 An Open Cenotaph for Open Minds 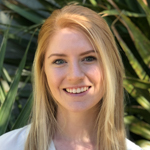 An Open Cenotaph for Open Minds

Since the time of its conception, a clear meaning and use of the site have been misunderstood. For one, it is both a cenotaph in the president’s honor yet removed from his place of death. Its juxtapositions in its narrative through time have only exacerbated the public’s sense of misinterpretation. 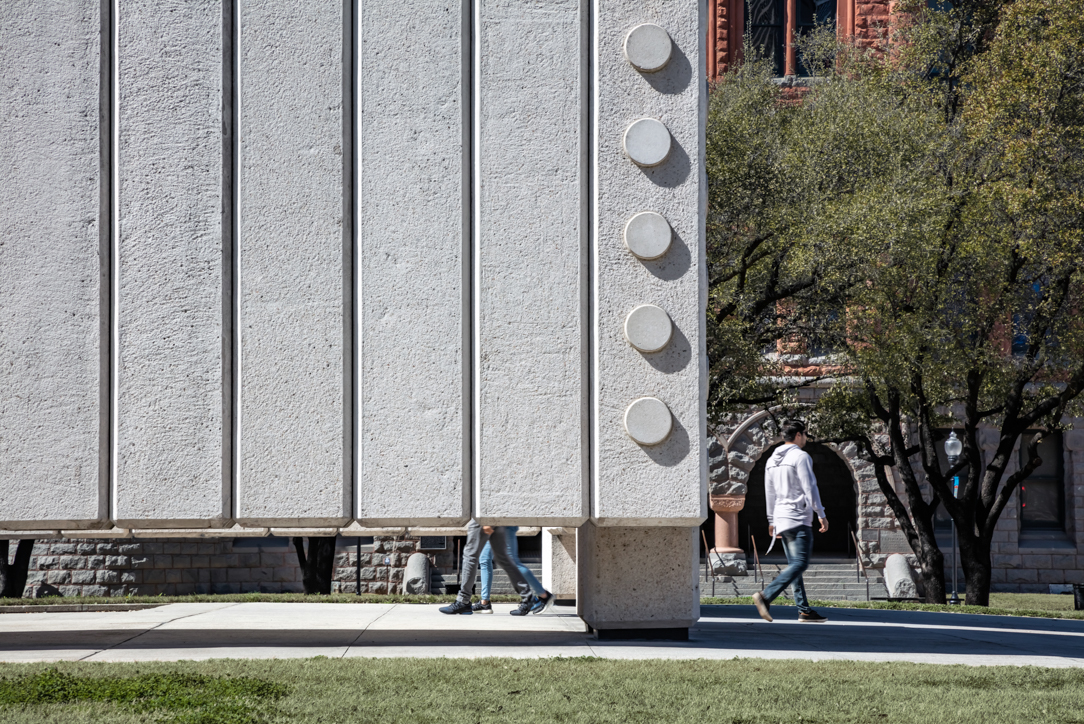 Work on the memorial began about a month after the assassination, with the John F. Kennedy Citizens Memorial Committee gathering information and recommending a plan of action. But R.L. Thornton, a former mayor of Dallas, led the opposition to a physical reminder of the assassination, with residents sensitive about reinforcing the “City of Hate” label the city was facing. He and nearly 200 other people pushed for an educational grant or a Kennedy scholarship instead.

Despite Thornton’s efforts, Dallas County commissioners were swayed by the Kennedy family’s interest in a memorial and swiftly voted to dedicate a vacant site less than 200 yards from the assassination site to the project. The Kennedys wanted a minimalist, modest memorial, and family friend and architect Philip Johnson, FAIA was commissioned to do the project.

After its dedication on June 24, 1970, the model of a cenotaph left visitors puzzled. Unlike traditional presidential memorials, it did little to educate the public on Kennedy’s life, tragic death, and legacy.

But with visitors coming to Dallas to see the assassination site and wanting to know more about that fateful November day, Dallas County developed the Sixth Floor Museum at Dealey Plaza. The museum, opened in 1986, is housed in the former Texas School Book Depository, from which Lee Harvey Oswald fired his deadly shots on Nov. 22, 1963.

Dealey Plaza and the John F. Kennedy Memorial are inseparable from the events that took place that day. In time, the memorial honoring the president who advocated civil rights became an anchor for social movements and protests. 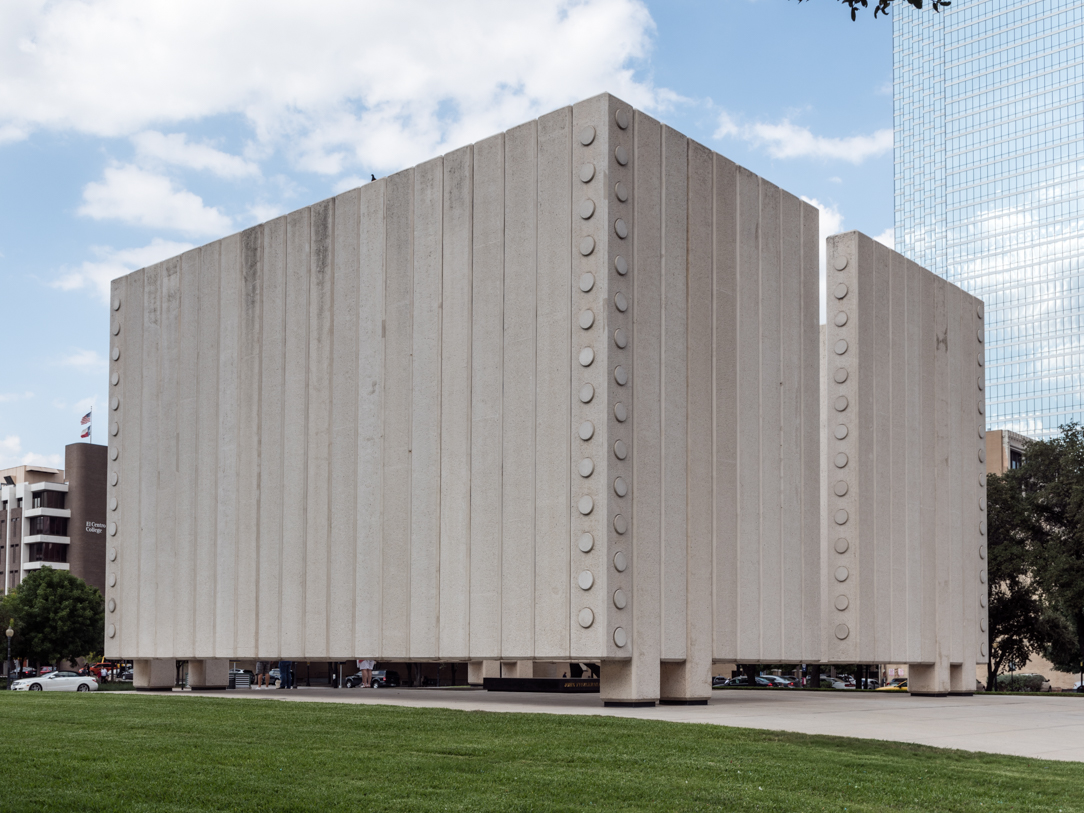 From the time of the assassination, it took nearly 25 years for the city to house both the John F. Kennedy Memorial and the Sixth Floor Museum at Dealey Plaza. This hesitation brought to light the weight of the task at hand as well as the pressure to respect what felt like a mistake in Dallas’s history to so many. The tension within the design and construction process is like that of the emotion still felt within the space today as visitors yearn for an optimistic look toward the future. These emotions are able to now manifest within the spaces designed to remember the President’s legacy similarly to what has long been seen on a national scale.

Less than three months before Kennedy’s death, 250,000 people gathered in the shadow of the Lincoln Memorial to demonstrate for equality in the March on Washington. There, Martin Luther King Jr. gave his “I Have a Dream” speech, which has echoed in the quest to uplift the marginalized and underrepresented.

The National Mall and Memorial Parks have long been landmark sites in American demonstrations, starting with the 1913 Women’s Suffrage March. Other significant protests include the March on Washington for Peace in Vietnam in 1965 and 1966, and the 1986 Great Peace March, which began in Los Angeles, as well as many more on human rights, foreign affairs, and domestic policy. However, it was the civil rights movement and the organization its leaders cultivated in both national demonstrations and local involvement that set a precedent on the political change that protest can spark. 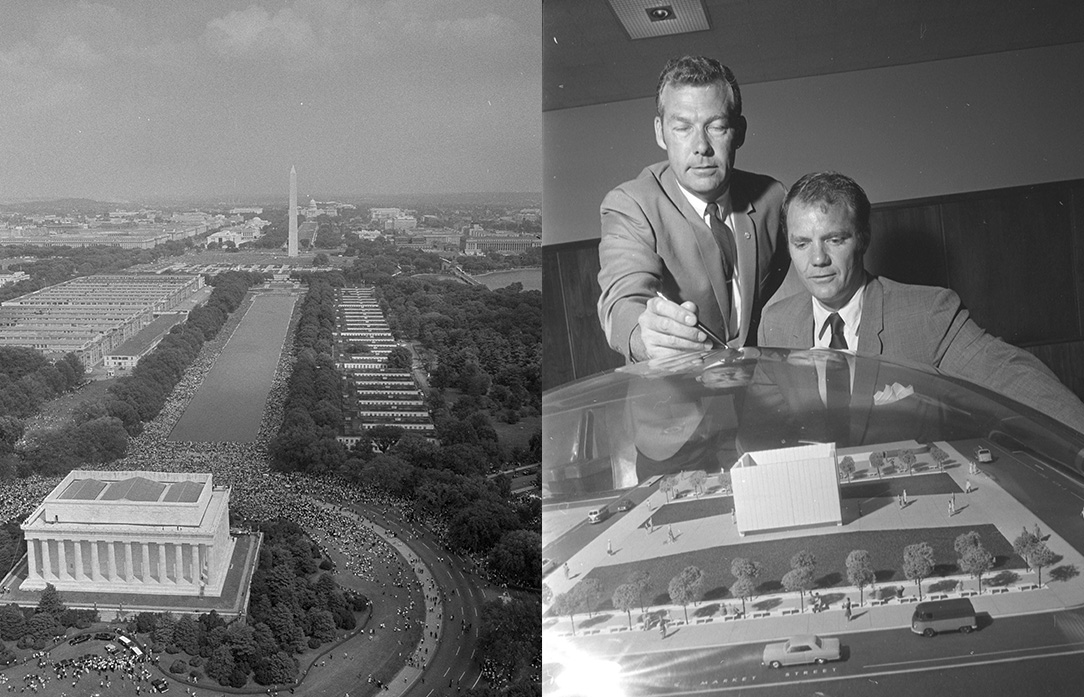 Photo Credtit (Left): Aerial view of marchers, from the Lincoln Memorial to the Washington Monument, at the March on Washington, 1963. / Credit: Thomas O’Halloran, Library of Congress

Likewise, in Dallas, the Kennedy Memorial has been home to social activism and demonstrations on civil rights and the Vietnam War. One of the earliest involved the Circle of Friends, a local LGBT group. Originally consisting of five members, the group organized a peaceful march seeking awareness for their cause while attempting to minimize any potential negative response. After receiving a permit for the 1972 march, Circle of Friends began their march at the Kennedy Memorial. By the time it ended at City Hall, their original group of about 100 had quadrupled in size as spectators joined in.

Over time, many groups have gathered at the Kennedy Memorial. In 1980, a Cuban American rally there encouraged the immigration of Cuban refugees to the city as Fidel Castro started the Mariel Boatlift. In 1984, as the Republican National Convention met in downtown Dallas, protests erupted at the memorial, City Hall, and outside the convention itself. Hundreds of protesters were arrested on various charges, including Gregory Lee Johnson for burning an American flag. The case, Texas v. Johnson, moved through the judicial system to the Texas Court of Criminal Appeals to the U.S. Supreme Court. In a 5-4 decision, the justices ruled that the act of burning an American flag was protected under the First Amendment. 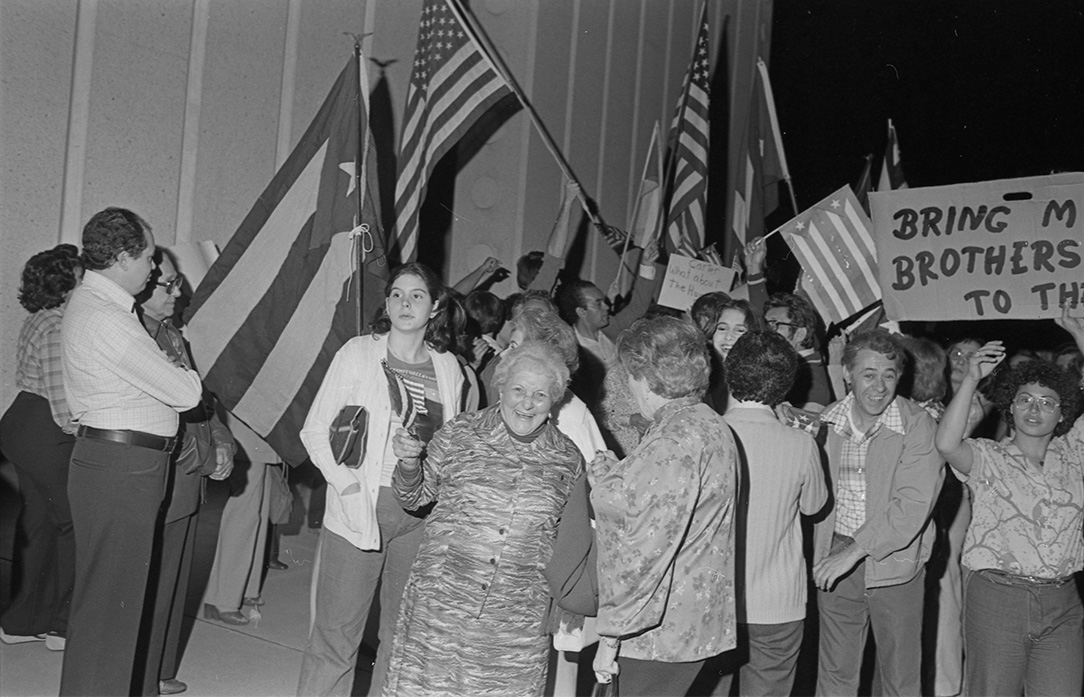 In recent years, the memorial has been the center stage for protests on issues as diverse as foreign policy in India, workers’ rights, immigration, and, inspired by Occupy Wall Street, economic inequality. These demonstrators intend to voice their message in the space that embraces the symbolism of an idealistic president.

Most recently, the memorial acted as a backdrop for the event “Freedom, Part II,” organized by artist and fashion designer Charles Smith II. The event took on issues on of racial justice and police brutality through the lens of panel discussions, 3D projections, musical performances, and a fashion show. “Freedom, Part II” took place in the wake of the deaths of George Floyd, Breonna Taylor, and Rayshard Brooks, in addition to many others, while the Black Lives Matter movement gained global support. 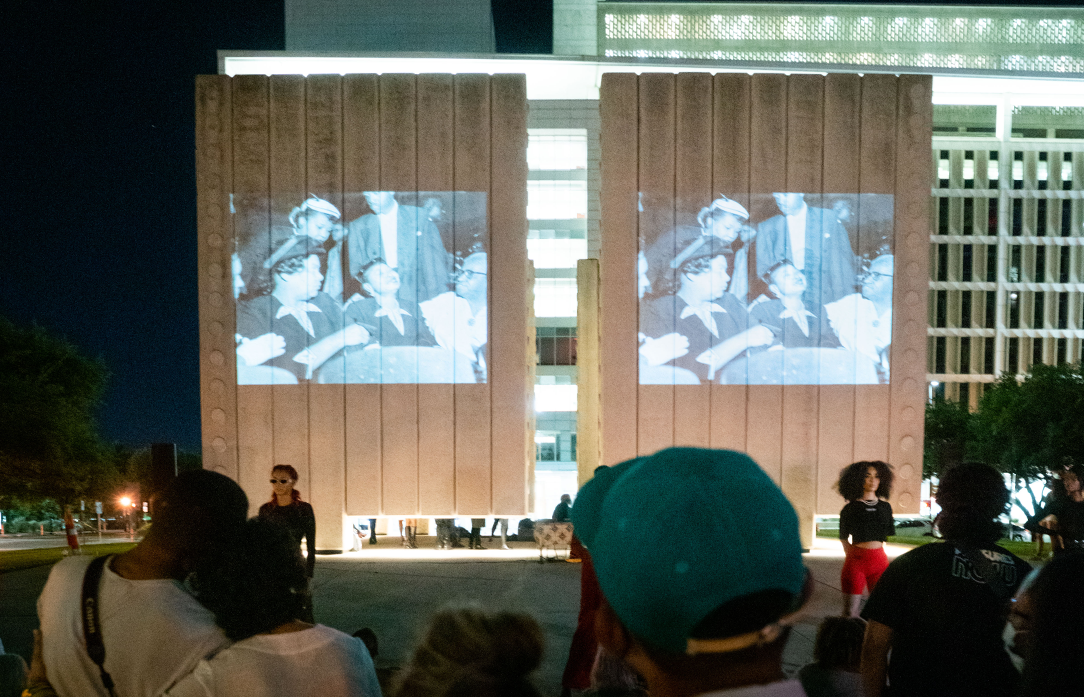 In the anniversary year of this memorial, it is important to reflect on how this space for collective memory has been used and valued in our culture. Disagreements involving these topics, spaces, and monuments of public importance acknowledges the fact that we are attempting to move to a place of resolve. However indefinite the path to resolve may be, we must honor unique heritage in each of us by ensuring voices continue being heard. As newer generations bring forward their own perceptions of the John F. Kennedy Memorial, we will continue seeing how these viewpoints relate to much larger issues raised in the current state of American culture. 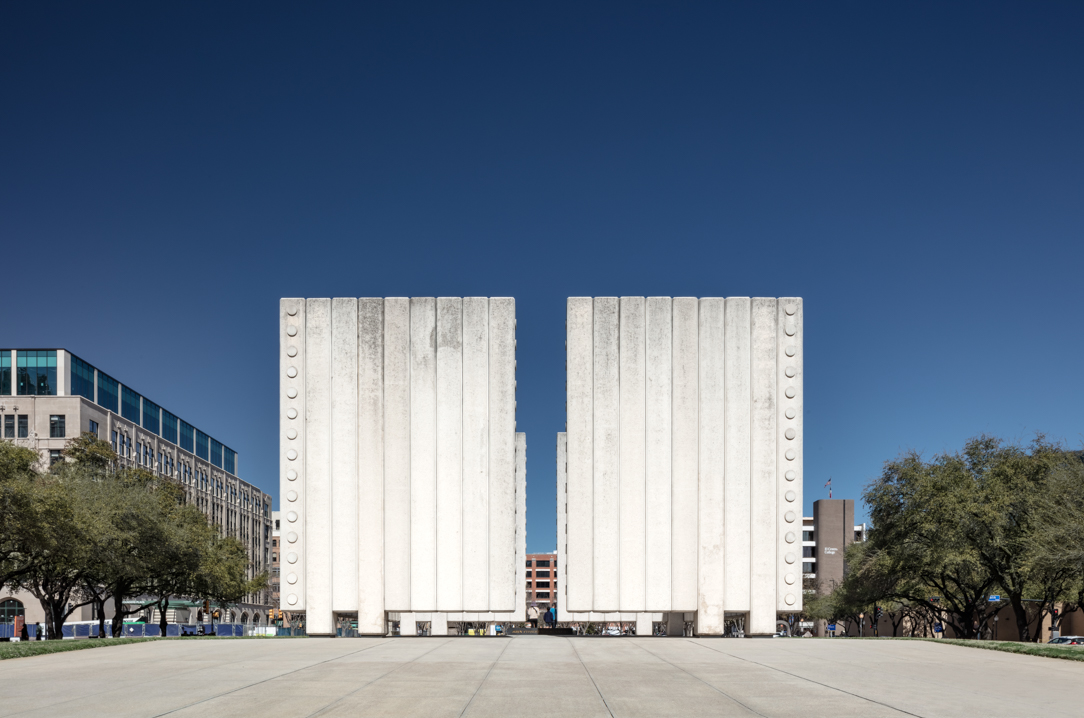