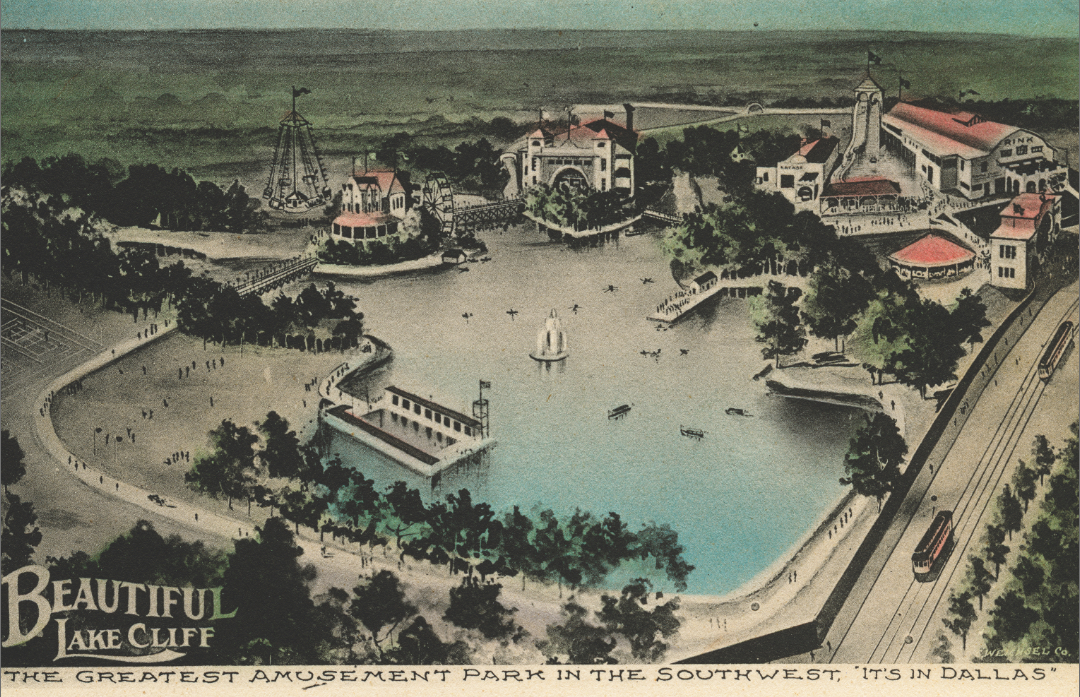 With names like Shoot-the-Chutes, Mystic River, and Circle Swing, you would think these attractions would be found at Six Flags Over Texas. Well, they predated Six Flags by 55 years and resided in the newly opened Lake Cliff Park in the Oak Cliff area of Dallas.

The man behind the new park was Charles A. Mangold, whose grand vision to bring an amusement park to Dallas — unlike any other the South had seen — became reality on July 4, 1906.

A short train ride from downtown Dallas, Lake Cliff Park was marketed as an escape that was “Clean, Cool, Delightful” and “the Southwest’s greatest playground.” The rides, attractions, entertainment, and dazzling electric lights that illuminated the park at night captivated the people of Dallas. Thousands flocked to see the wonders it provided during its short seven years of existence.

In an effort to attract people to developing Oak Cliff in the late 1800s, the Llewellyn Club, a private country club, excavated a large area for a lake around 1888 and built a clubhouse and recreational area three blocks from the streetcar line. Even with the convenience of the streetcar, little development came.

The property was sold to Dr. Robert Spann, who converted the clubhouse into a sanitarium. He operated it for several years before selling it in 1906 to Charles A. Mangold and John F. Zang. The two had grand plans for the site and for the development of additional land they acquired surrounding the lake.

Mangold and Zang gathered several prominent Dallas businessmen to invest in the Cliff Park and Theater Company, which was responsible for developing the park. Mangold was the visionary and driving force behind building an incredible amusement park to rival those found in other parts of the county. They also hoped the new park would greatly increase the value of the land they owned around the newly renamed Lake Cliff. That didn’t turn out to be the case — and certainly not for want of trying as the new park was wondrous for its time.

The transformation began immediately as the company invested heavily in creating a park with “all the marvels, countless curiosities, and spectacular features of the great amusement resorts of the country.” They hired the prominent Dallas architectural firm Lang & Witchell to design the park and its buildings around the 30-acre lake.

The entrance “gate” to the park was a statement piece by itself. The 45-foot-tall structure had a large, two-story archway emblazoned with “Lake Cliff,” surmounted by a large eagle sculpture. Flanking the archway were two-story blocks with arched openings at the first level, windows at the second level and topped by large American flags that fluttered in the summer breeze. Once visitors passed through the entrance, they were enticed to try the rides, attractions, entertainment venues, restaurants, athletics, and curiosities. 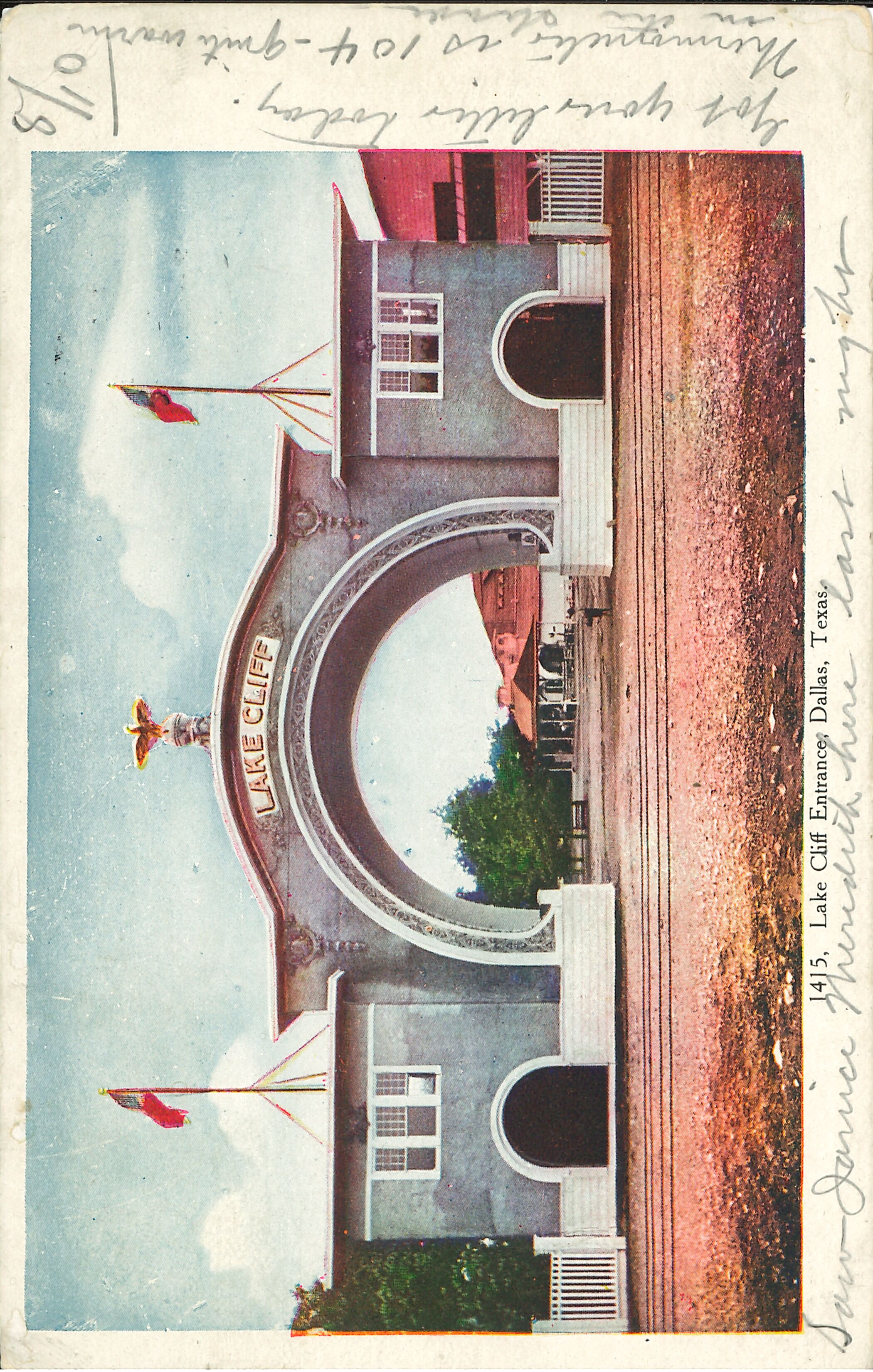 In 1906, visitors to the new Lake Cliff Park used the main entrance designed by Lang & Witchell as a statement piece for the park. The forty-five tall structure had a large two-story archway emblazoned at the top with “Lake Cliff” and surmounted by a large eagle sculpture. / Postcard courtesy of Preservation Dallas

The rides were a big draw at the sprawling park, and the “take the breath away” attraction was the Shoot-the-Chutes ride, an early version of the modern-day flume ride. Visitors climbed into a gondola and were set adrift before being carried up a steep incline by a chain cable. At the top of the incline, the riders had incredible views of the park’s surroundings before the gondola was turned and pushed down the large slide into water below, spray flying to either side while the passengers stayed dry. Over 125,000 people enjoyed the ride that first season. 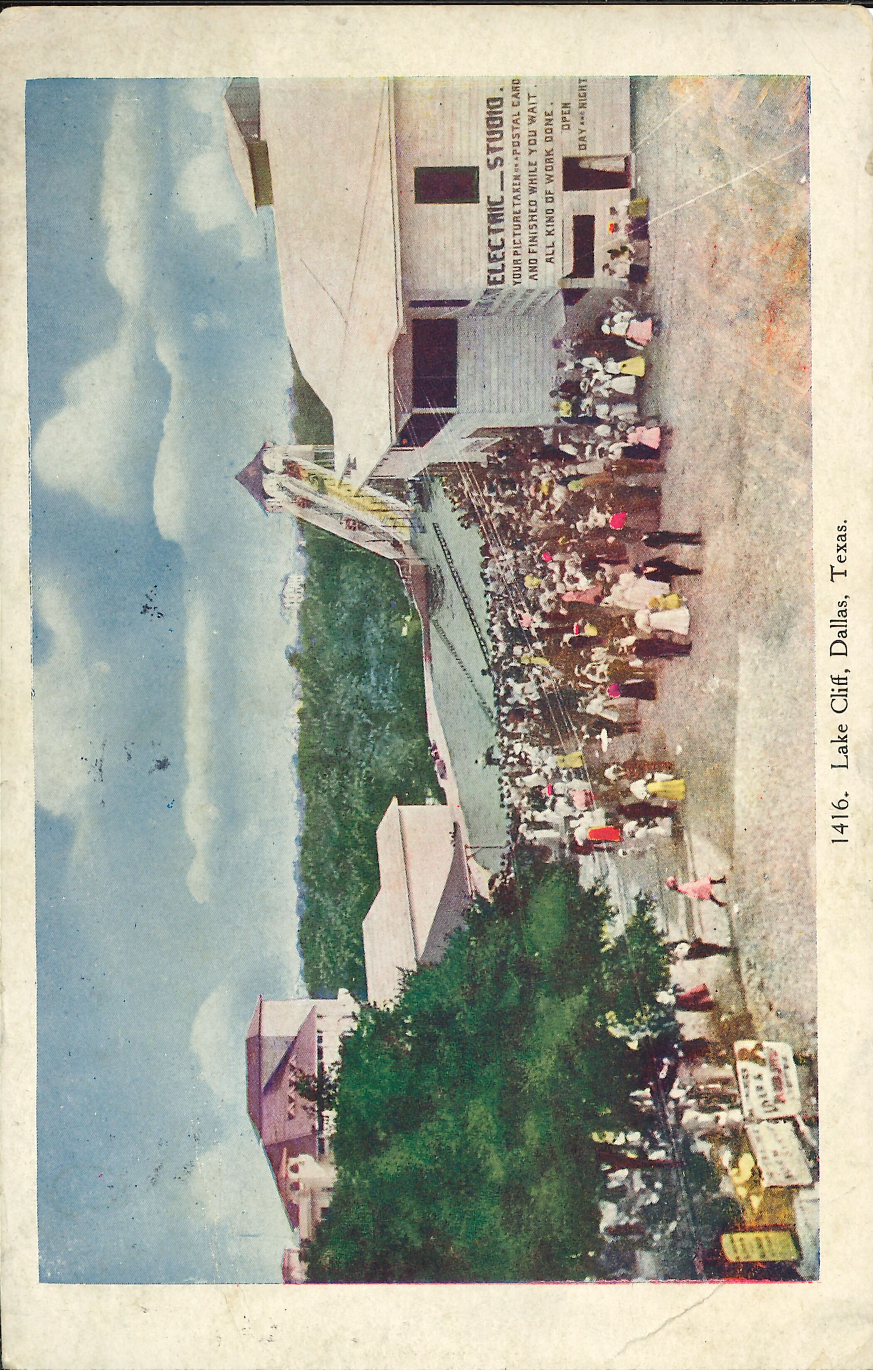 In the first season the park was open, it was noted that over 125,000 people enjoyed the “take the breath away” attraction known as the Shoot-the-Chutes.

Another thrill ride, the Circle Swing, consisted of an 80-foot-tall steel tower with six long arms extending from the top, each with chains attached to passenger baskets that looked like airships. A 15-horsepower motor rotated the tower extensions, gradually swinging the cars outward and upward until they reached a speed of 40 miles an hour. At its top speed, the ride’s circumference stretched 400 feet and the cars stood straight out from the vertical center pole. At night, the ride was gloriously lit with hundreds of lights strung on the arms, rods and cables, producing an electric sunburst effect.

Other rides included a milelong roller coaster, a Ferris wheel, a “Carousal” for the children, and the Mystic River. The latter was described as a “weird and wonderful journey through whirlpools, maelstroms, and quiet rivers.” It also included “spectacular and realistic features” such as the Lagoons of the Gnomes, Venice at Night, Palace of the Doges, the Royal Gorge, the Canals of Stygian Blackness, and beautiful electric displays.

The Japanese Village, a later addition, was designed as a “perfect unabridged realization of the Kingdom of the Mikado and the Chrysanthemum” with a re-creation of Mount Fuji, botanical gardens and Japanese tea offered by kimono-clad servers.

Sports abounded in the park, which had tennis courts, baseball grounds, a skating rink, a bowling alley, a natatorium, and boating. The skating rink, its roof resembling an airplane hangar, was touted as the largest in the world. It could accommodate 2,000 skaters on its polished white maple floor and 2,500 in the seats. By night, electric lamps hung from the ceiling.

With depths ranging from 18 inches to 30 feet, the natatorium featured a large enclosed swimming area in the lake. A bathing pavilion contained 70 dressing rooms for guests.

The Casino built on the site was really a theater as no gambling took place on the premises. The grand building featured a large arched entrance with an open-air gallery above and towers flanking the sides. The theater was on the second level, with a soft drink emporium below and a balcony above called the Palm Garden, which also served lunch. The Casino had modern opera chairs and seated over 2,000 for theater, opera and orchestra performances. Actors, singers, and stage designers came from New York and Europe to create the most up-to-date productions, presented daily at ticket prices of 10 to 30 cents.

An open-air circus with a series of daily acrobatic feats and exhibitions added to the festive atmosphere. At the Stadium, more entertainment took place, with balloon ascensions, athletic feats, high-diving, and moving pictures. There were also fireworks and parachutists paid to drop into the park.

Even though Lake Cliff Park was highly successful at drawing hordes of people, it did not do well financially, as the park was expensive to operate and the attractions costly to build at an estimated $250,000. A couple of months before the park opened for the 1913 summer season, a fire destroyed the skating rink, Shoot-the-Chutes and the grand entrance gate. With the loss of key attractions and the mounting expenses facing them, the investors sold Lake Cliff Park at a loss in 1914 to the City of Dallas, fetching a mere $55,000.

In 1921, the city built a public pool, separate from the lake’s swimming area. In the 1930s, the Works Progress Administration built rose gardens, a stone pavilion and pergola, and retaining walls, which stand to this day. By the 1940s, the remaining rides and buildings from Lake Cliff Park’s glory days were removed for residential development. With the amusements gone, the focus shifted to athletics with new tennis courts, softball diamonds, a football and soccer field, and a handball and volleyball court along with a paved perimeter. The public pool was subsequently removed in 1958. The park remains to this day for people to enjoy for sports and other activities in its open area. The lake remains as well, although not for recreation or swimming.

Mangold’s vision of an amusement oasis in Dallas was realized with Lake Cliff Park, if only for a short time. The park brought joy and wonder to the many thousands of people as they frolicked on the grounds, rode the exhilarating rides, marveled at the wonders of the park and gazed in awe in the evening when thousands of electric lights illuminated the wonderland. Lake Cliff Park was truly something special for Dallas — a place like no other to escape to in the heat of the summer for enjoyment and refreshment.