As drivers speed down Harry Hines Boulevard, they pay little attention to Pike Park on their way to Uptown or downtown. The small, unassuming park on Harry Hines is important, though, as it has been a major part of Dallas’ Mexican American community since the 1920s.

Over the years, Pike Park has remained an oasis for Mexican Americans despite several attempts by the city to close it. The park serves as a place to celebrate and remember Latino culture and heritage in a rapidly changing city.

In 1912-13, at the suggestion of city planner George Kessler, the City of Dallas acquired 4.4 acres of land north of downtown along Turney Avenue (now Harry Hines) to establish the first park in what was then the densely populated Second Ward. In the late 1800s, the area was settled mainly by Eastern European immigrants of Jewish faith, leading to the nickname “Little Jerusalem.”

Turney Play Park was the intended name for the recreation area until a name-the-park contest. At the suggestion of a neighborhood girl, Summit Play Park was chosen because of the park’s setting on a high piece of land overlooking downtown. Formally dedicated in 1915, Summit Play Park contained a field house, playground equipment, a wading pool, tennis courts, and a baseball field. With all of its amenities, the park quickly became a gathering place for neighborhood residents. 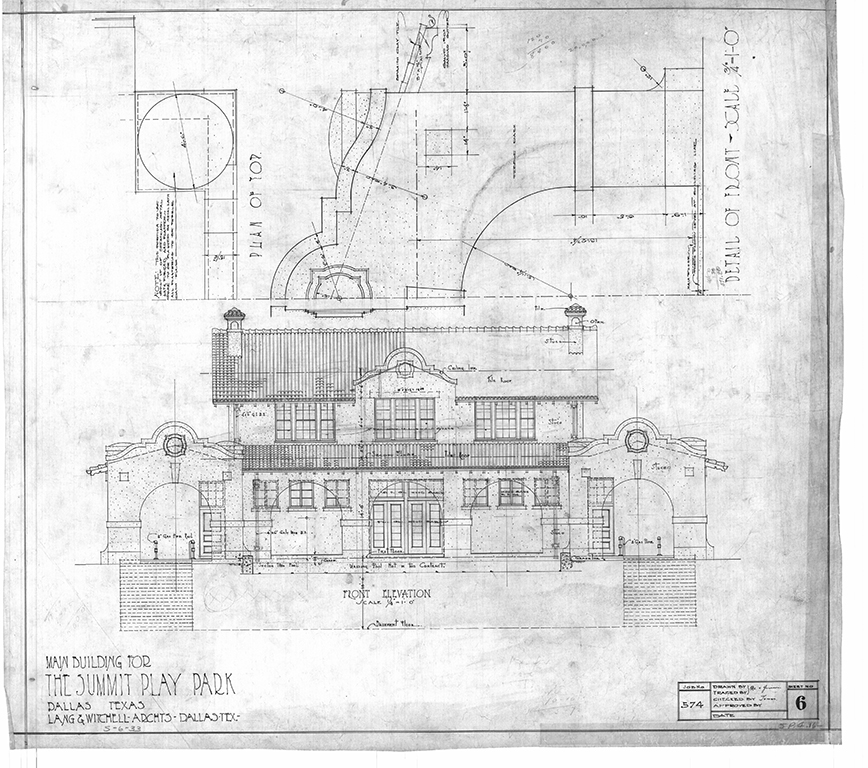 The prominent Dallas architecture firm Lang & Witchell designed the park’s centerpiece, a two-story Mission Revival field house with a basement. Constructed in 1914 for $24,000, the structure had a large arcade across the front of the first story, with Mission-style parapets at either end and another parapet over the central window on the second floor. The side gable roof was covered in red clay barrel tiles, and chimneys stood on each end. The facility contained assembly rooms, bathrooms, a reading room, and a milk depot. There were even free showers in the basement for nearby residents because of a lack of running water in their homes.

As the residents of Little Jerusalem prospered, they started moving to other parts of Dallas. By the 1920s, most of the new residents to the area were migrants who had fled the turmoil of the Mexican Revolution. With the shift in its ethnic makeup, the area became known as Little Mexico. 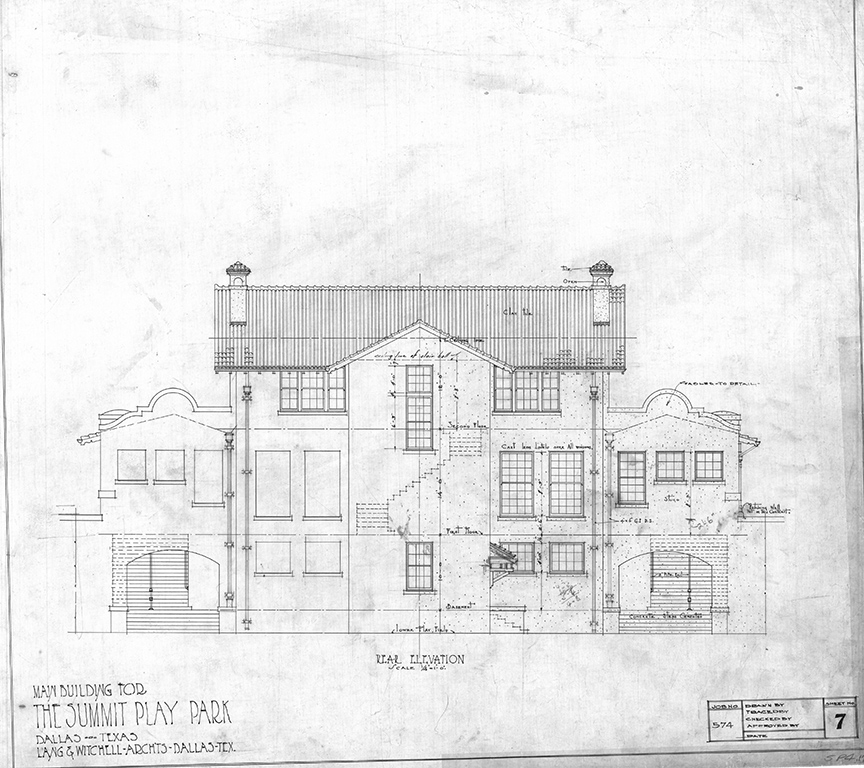 During its peak years from the 1920s to the 1950s, Little Mexico was bounded by the MKT rail line on the southwest, Maple Avenue on the northeast, McKinney Avenue on the southeast, and Oak Lawn Avenue on the northwest. Densely packed wood-frame houses, a Mexican American Catholic Church, a grocery, the first El Fenix restaurant, and a variety of other businesses filled the neighborhood.

Except for special occasions or on Mexican holidays, Mexican Americans were not allowed to use Pike Park, even though Little Mexico surrounded it. In 1926, the first celebration of Mexican Independence took place at the park. But it wasn’t until 1931 that the Park Board clearly delineated the joint use of the park for “Mexicans and Americans.”

Pike Park quickly became the social center of one of the largest Mexican American neighborhoods in the city. Despite that, “Vamonos al parque de los judios” (“Let’s go to the park of the Jews”) was frequently heard in the 1930s.

By the 1940s, the park became “nuestro parque,” or “our park,” and considered the heart and soul of Little Mexico. 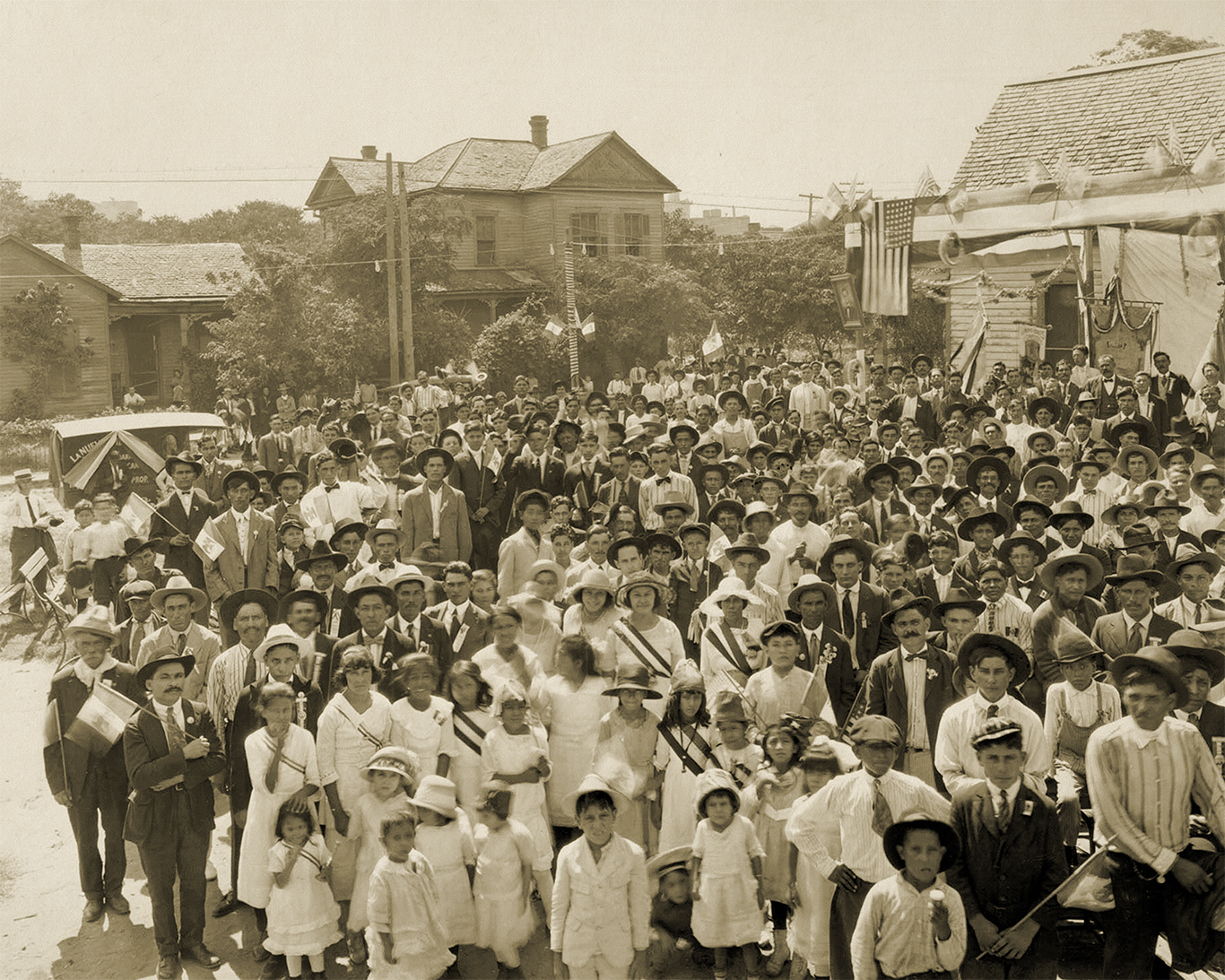 Residents of Little Mexico and the Mexican American community came to Pike Park to celebrate the holidays, including this July 4th celebration in 1926. // Photo courtesy of the Dallas Mexican American Historical League.

In 1950, a major renovation removed the upper floor of the field house and converted the rest of the building into club and recreation rooms. Shortly afterward, the city made the first attempt to close the park. The Little Mexico community fought back, and the City Council let the park stay open. In 1956, Little Mexico received federal funding for urban renewal, including work on the field house, a lighted baseball field, and expanded play areas.

The vibrant Little Mexico neighborhood started to shrink in the 1960s with the construction of the Dallas North Tollway. Slicing through the community, the road project took acres of houses and impeded access to Pike Park. Use of the park declined, and the city made another attempt to close it. This time, Anita N. Martinez, whose 1969 election made her the first Mexican American on the City Council, stepped in to fight for Pike Park as one of her first initiatives. She called the park “the psychological heart of the Mexican American community in Dallas” and succeeded in keeping it open.

In 1978, the city spent $400,000 on renovations to Pike Park based on input from residents on what they wanted there. The arcade was filled in with windows and a new Mission- style central parapet was added to the field house. The pool was moved from the front of the building and replaced by an expansive brick plaza with a large bandstand fashioned after one in Monterrey, Mexico, for large festivals. 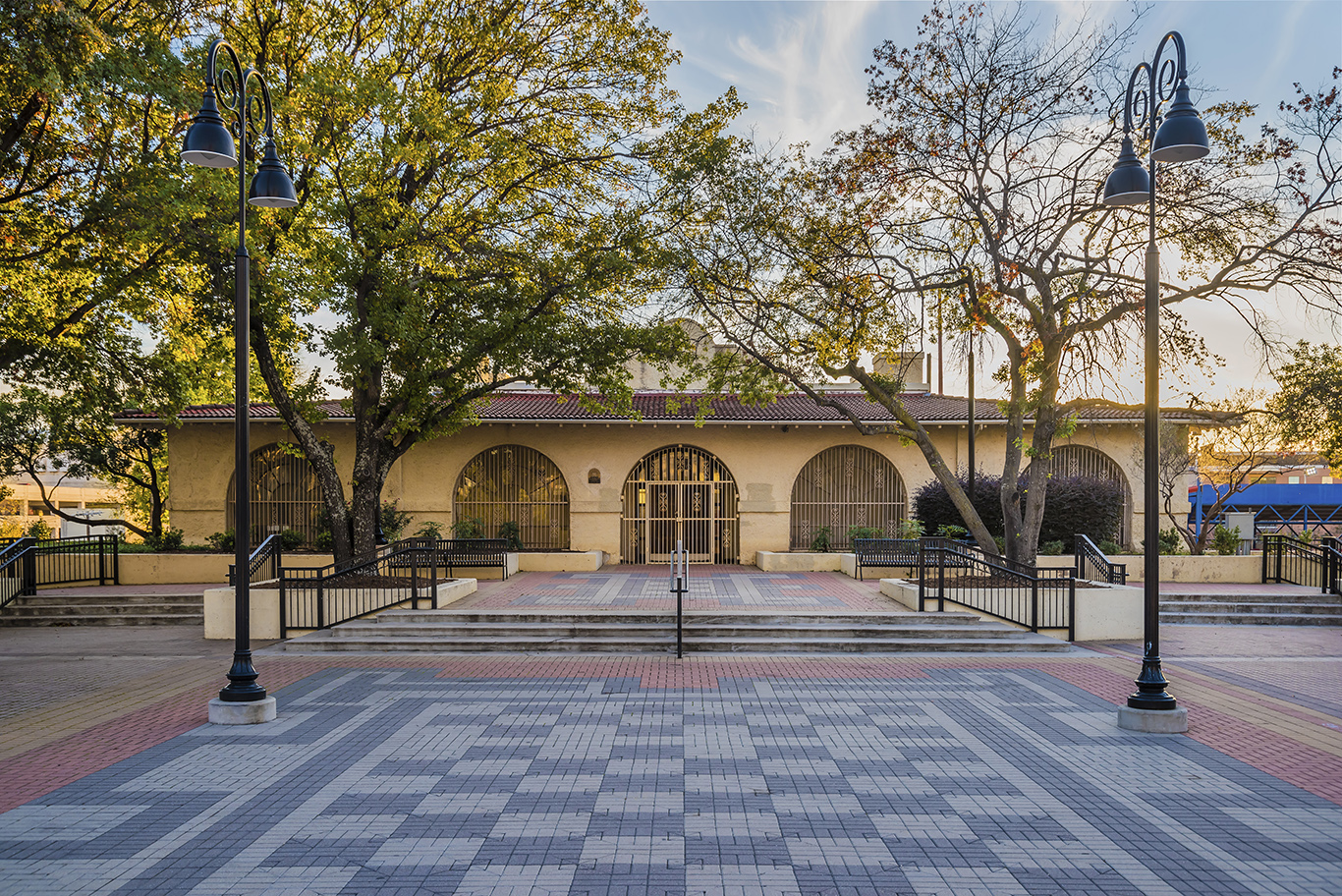 Because of its historic significance and cultural importance, Pike Park received a State of Texas Historical Marker, its text in Spanish and English, in 1981. But the recognition didn’t end its turmoil.

The third attempt to close the park came in 1986, when the Park and Recreation Board sought to save $84,000 from the yearly budget. The justification was that children could use nearby Reverchon Park instead, although it was a very dangerous walk down Harry Hines to get there. The remaining residents around the park rallied again, and the city kept it open. In 2000, the park was designated a City of Dallas Landmark, cementing its historical significance. Today the park is well maintained, but the field house is closed due to a lack of resources for needed repairs. The Dallas Mexican American Historical League is exploring the possibility of making the building a museum on Mexican American history in Dallas. 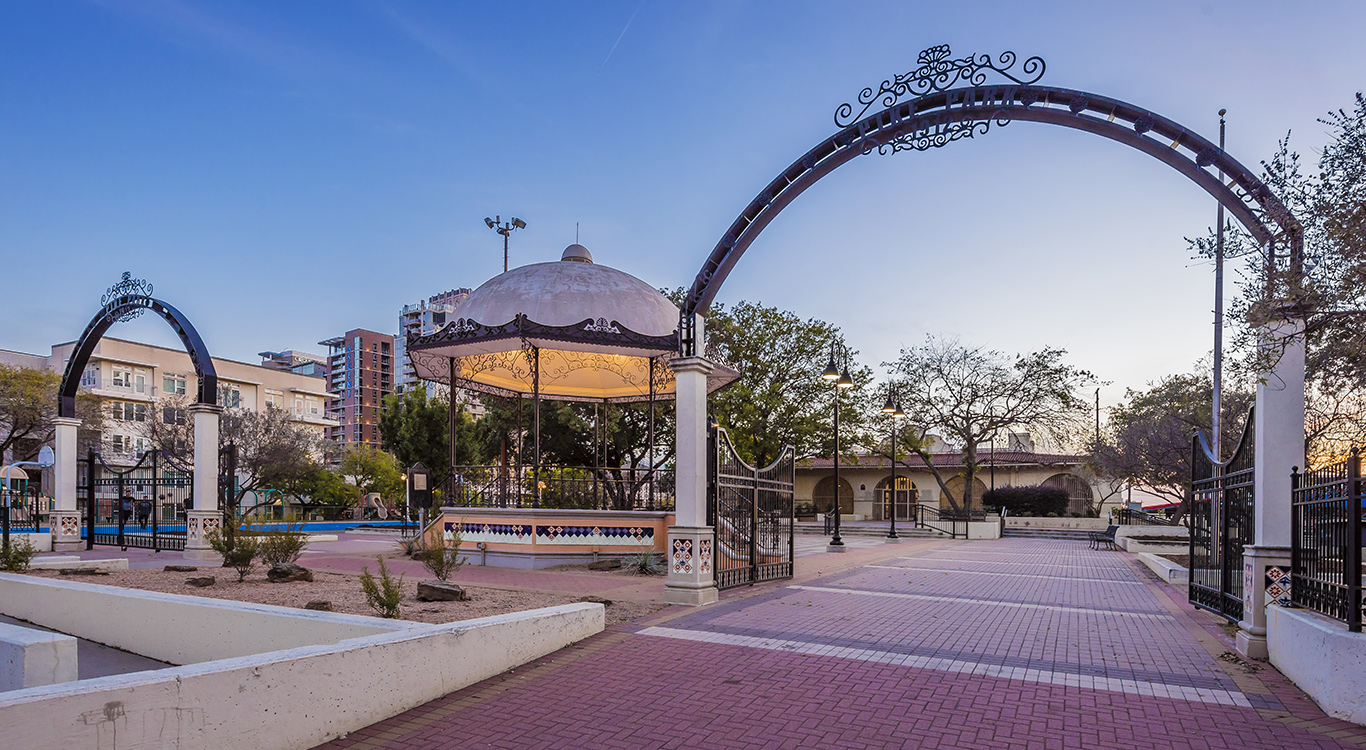 Today there isn’t much left of Little Mexico, with office towers and swanky residential buildings springing up in place of the small homes that surrounded the park. Still, Pike Park remains an oasis in a modern city, a destination where Mexican Americans come from all over to celebrate their heritage. They have fought hard to keep Pike Park open because, more than a place for recreation, it’s the symbolic heart of Dallas’ Mexican American community.