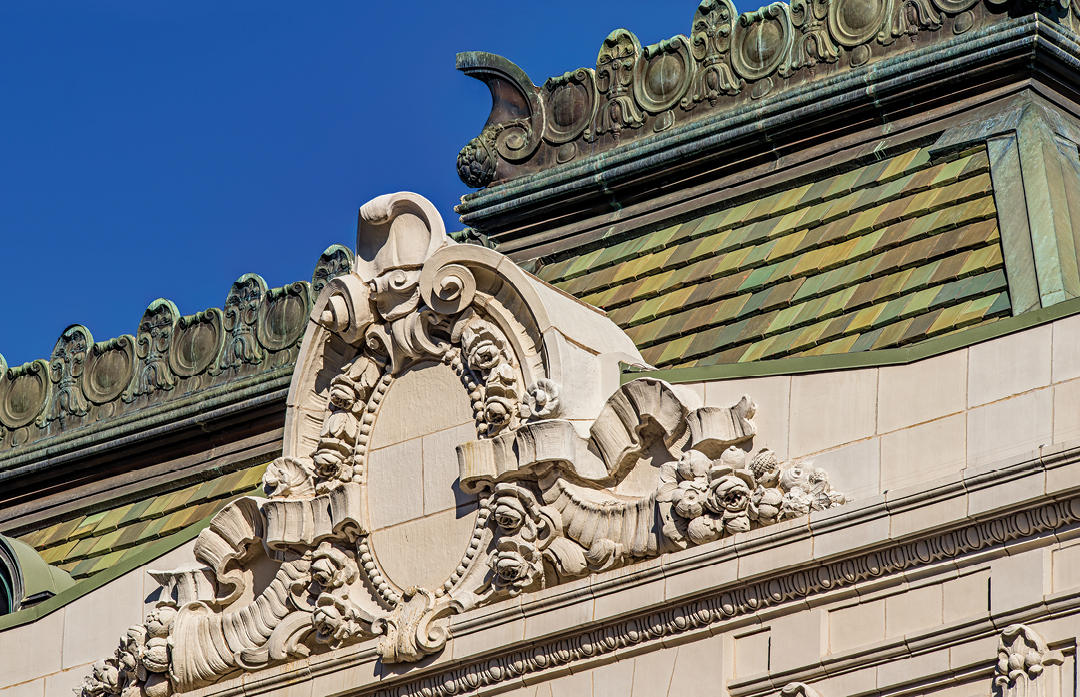 Architect C.D. Hill designed one of the best revivalist buildings in the city with the Dallas Municipal Building. Completedin1914, and typical of the time for an important public building, the grand building has all the hallmarks of Beaux-Arts: classical forms and features including bronze entrance doors with elaborate ironwork; monumental columns with Corinthian capitals; terra cotta balustrades, panels and cartouches; and a mansard roof with clay tiles, copper dormers and a copper cheneau. By the 2000s, many of those features were dingy and deteriorated rom decades of grime, storms, and water infiltration.

The building was the seat of city government for over 60 years. In 1956, an annex designed by Mark Lemmon was added that served as the police headquarters until 2003 and the municipal court until 2013. All of that gave it prominence in the city. However, when Jack Ruby shot Lee Harvey Oswald in the basement of the annex, the building was propelled into the spotlight of the Kennedy assassination and made forever a part of the nation’s history.

In 2007, the city decided the building could languish no longer, and plans were developed to restore the exterior and turn the building over to the University of North Texas for its new law school. Other than addressing the water infiltration issues, the exterior work was put on hold while the city renovated the mid-century modern annex for the municipal court. Exterior work began in earnest on the original building in 2015, using $14 million in bond money. 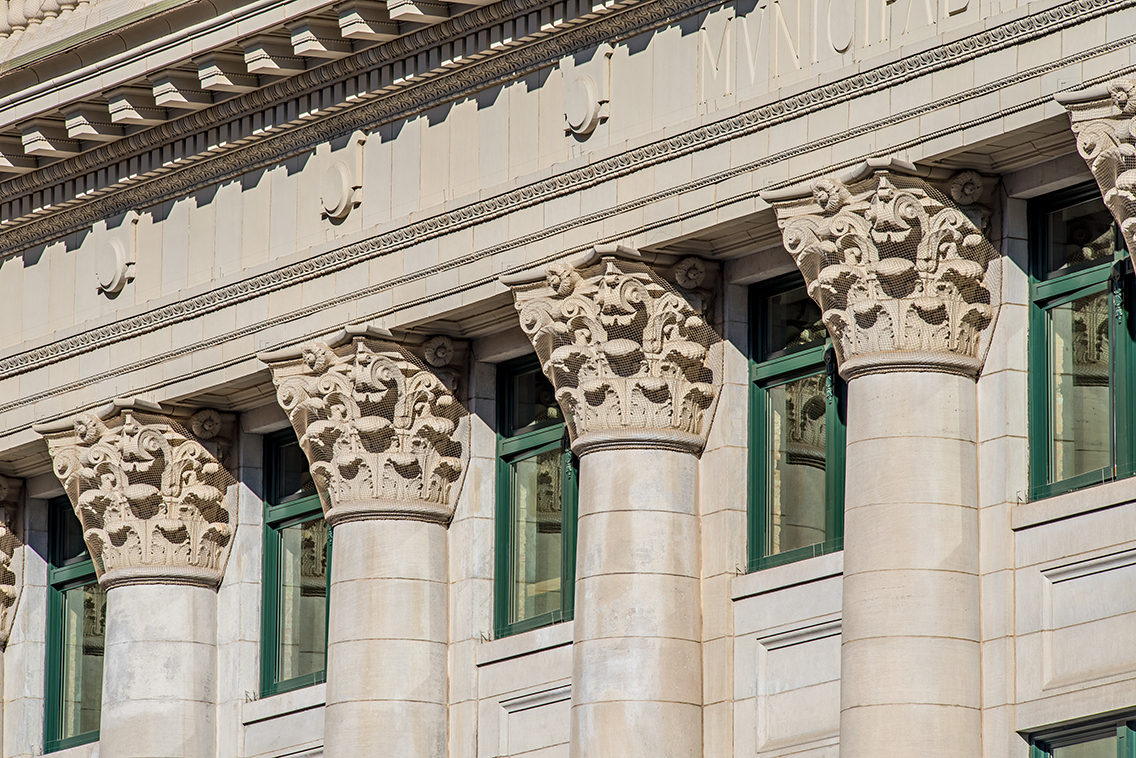 The Indiana limestone facade had suffered years of power-washing, sandblasting, and hailstorms that had pitted the surface and opened pores for dirt and water to penetrate. To address this wear, the stone’s top layer was honed by hand to a smooth surface to resist dirt and water. Dishwashing soap removed the discoloration on other areas. / Photo: Tracy Allyn Photography​

As most people know, buildings of such detail had a cadre of craftsmen working on them when they were constructed. But few realize the number of craftsmen and amount of detail work needed to restore the impressive architectural features of a building over 100 years old. The exterior restoration was headed up by Carl Janak, senior architect at the City of Dallas, who spent 11 years on the project. His work was aided by the original linen drawings, found in the city archives and providing a trove of original information about the design. However, there were still questions that needed answers, especially regarding changes to the structure in the field during construction and the original design of the decorative elements, which were not always fully detailed in the drawings.

When work began, the Texas gray granite base of the building was in decent shape, unlike the Indiana limestone above that had suffered years of power-washing, sandblasting, and hailstorms that had pitted the surface and opened up pores for dirt and water to penetrate. To address that, the stone’s top layer was honed by hand to a smooth surface to resist dirt and water. Even with honing, areas of discoloration couldn’t be removed. That led to the discovery that much of the damage came from inside the stone, from internal gutters blocked with debris and even dead pigeons so that water did not drain properly. After clearing the gutters, the project consultant, Conley Group, tried numerous chemicals to clean the stone with little success. The general contractor, Phoenix 1 Restoration Ltd., then handwashed the stone with dishwashing soap and rinsed it with water. Remarkably, that did the trick. 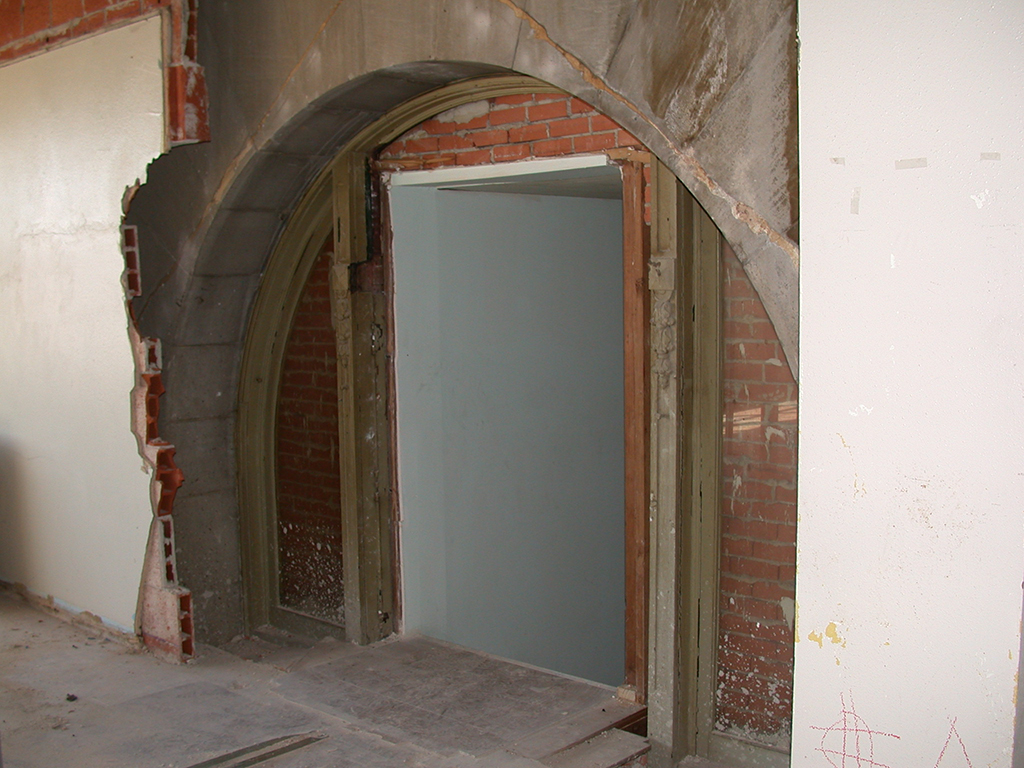 The fourth level of the building is made up of terra cotta pieces and separated from the limestone below by a projecting cornice supporting a decorative balustrade. This is also where the internal gutters are, and the pooling of water from the clogged drainage system seeped through the terra cotta pieces and rusted the internal metal anchors. When JQ Engineering evaluated the building, its team couldn’t believe the pieces were still in place, with friction apparently the only thing holding them to the façade. About 400 terra cotta pieces had to be recast with new anchors and the rest reinforced with new stainless steel pins from the back in order to avoid bolts on the outside surface. Numerous balusters had to be replaced because the rebar inside had rusted out, causing the pieces to deteriorate. The terra cotta cartouches on the projecting corner elements of the building were in better shape, with only minor cracking that could be easily filled and a few missing edges that could be re-created.

All of the original terra cotta pieces were glazed with the same color, but each varied slightly in tone from the firing process. To keep the replacement pieces from looking too new and uniform, four shades of coatings were hand-painted on each piece so that it blended with the original pieces. Decades of exposure to the elements also eroded and pitted the original glazed surfaces, so they were recoated to seal them against water.

Original clay tiles were still in place on the mansard roof. Surprisingly, only about 25 percent were cracked or broken. Tiles from the rear of the building, which abuts the 1950s addition, were relocated to the more visible sides to replace the damaged tiles. The manufacturer of the original tile provided replacements for the rear sections of the roof.

Architect C.D. Hill designed one of the best revivalist buildings in the city with the Dallas Municipal Building. Completed in 1914, the Beaux-Arts style building was designed with incredible detailing as shown on the wall section of the original drawings on linen. The section details the upper portion of the building with terra cotta column capital and projecting cornice with terra cotta pieces and balustrade.​

The rounded copper dormers were removed and taken back to the shop to repair dents caused by years of hailstorms. The tops were replaced with stronger sheet metal, which was powder-coated to match the patina of the copper faces. Workers wanted to polish up the copper dormers and cheneau along the top of the roof but were dissuaded to keep the incredible patina intact.

The original wood casement windows were long gone, replaced with fixed aluminum storefront systems in the 1980s. Since the goal of the project was to restore the look of the façade, windows closer to the original design were needed. The original drawings did not detail the windows well enough to re-create the profiles and decorative leaf design on the dividers between the paired windows. But, in a lucky break, interior demolition on the rear wall revealed an original wood window, which provided the missing details. Marvin Windows fabricated casement windows that matched the profile of the originals and even re-created the leaf design based on the found original. To cut down on future maintenance, the new wooden windows were clad in a prefinished metal in dark green, matched to the original color through paint analysis.

After three years of painstaking work to the exterior, the Dallas Municipal Building has been brought back to life but not taken back to its birth. As Janak put it, “We didn’t want to make it look like a brand new building. We wanted to honor the 100 years of patina by keeping it intact and letting the age of the building show through.” 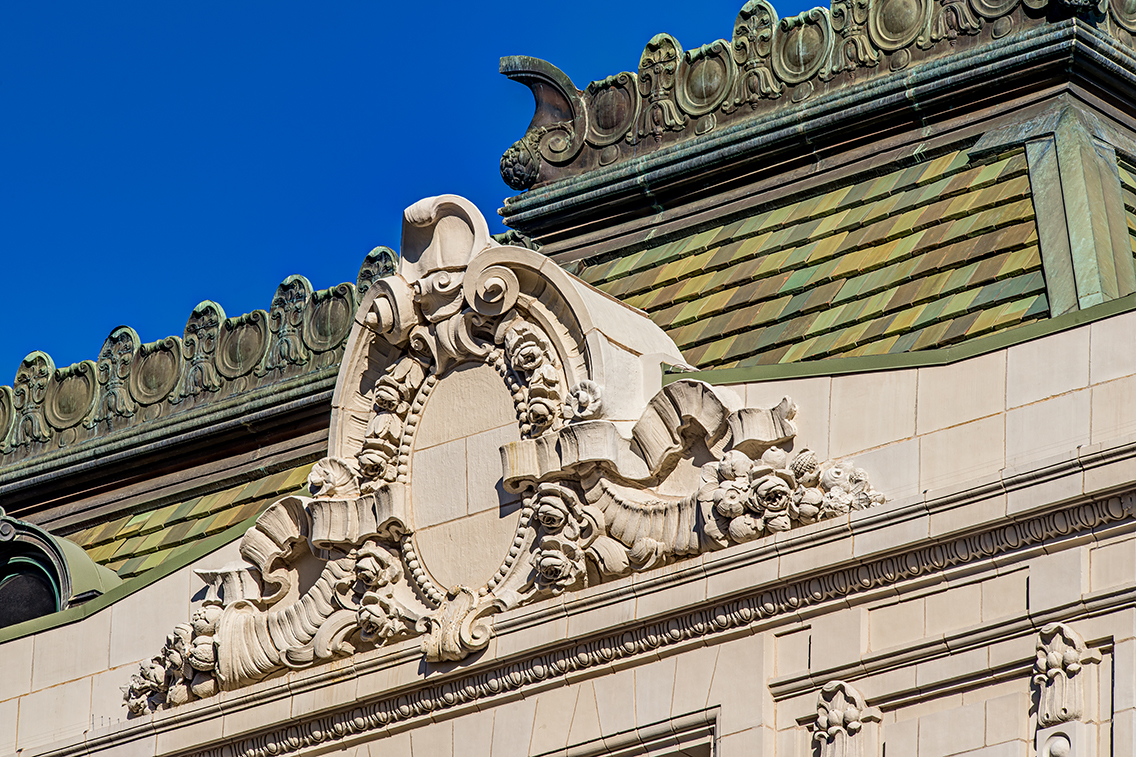 It took a crew of craftsmen who knew how to meticulously restore a historic building and artisans who re-created the decorative pieces and hand-finished them to achieve a blend of new with the original. The hard work paid off with an incredible exterior restoration. And now, UNT has begun the interior work to complete the transformation of this venerable Dallas building.