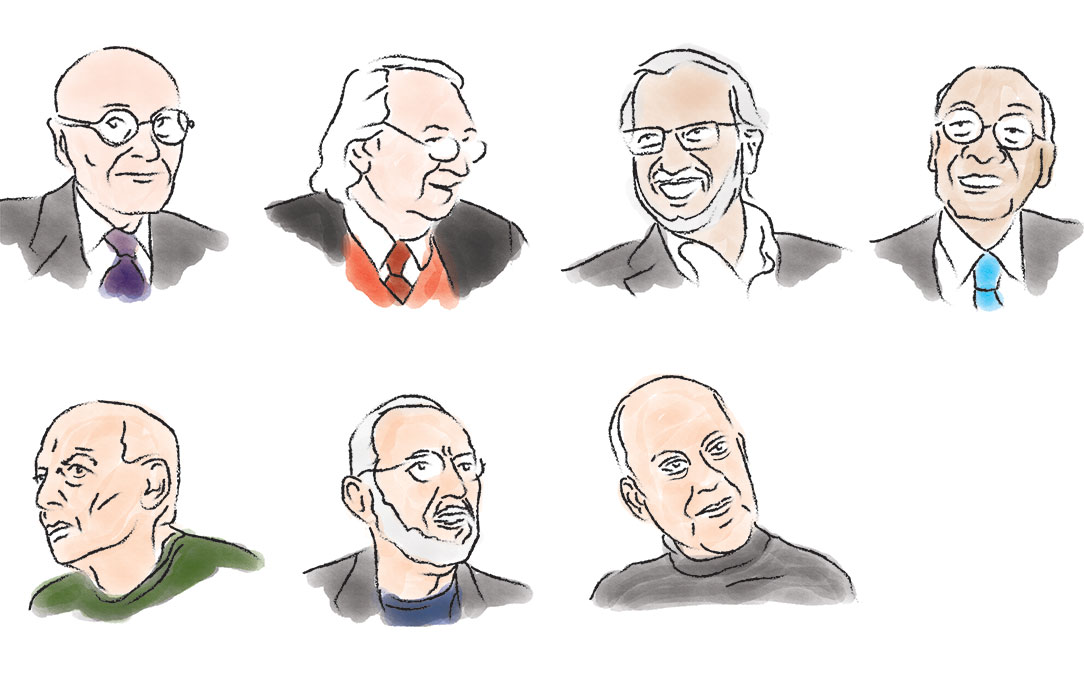 Dallas is well-represented with a list of architectural gems that have captured the coveted Pritzker Prize.

The works of seven winning architects are located here—and the majority of their work is concentrated in the Dallas Arts District. In typical Texan fashion, this makes Dallas, according to Kriston Capps at The Atlantic, the city with “the best architecture per square mile”[1] in the U.S.

Fueled by civic pride and an influx of oil revenue, Dallas’ love affair with celebrity architects began in the 1970s with buildings by both Philip Johnson and I.M. Pei. So began the dating between two large egos: Dallas and its favorite celebrity architects.

The following are various quotes from these Pritzker winners about their thoughts on Dallas and working in our city.

SIGNED THE LETTER TO THE KIMBELL ART FOUNDATION WITH PHILIP JOHNSON AND OTHER ARCHITECTS ABOUT THE PROPOSED EXPANSION: “‘While acknowledging that some form of expansion is necessary, we strongly oppose the current project. To put it bluntly, we find this addition to be a mimicry of the most simple-minded character. If executed, the building will not only lose its intrinsic purity, but also its very delicate placement on the site … Why then propose something that Kahn himself would have abhorred?’”[2] 1989

"Texas is the America of the 19th century. It's the frontier, freedom."[4]

ON THE CRESCENT: "It's enormous, a whole neighborhood, not just one building. To give unity to a whole section of the city, that's what an architect dreams about."[5]

ON COMERICA BANK TOWER AT MAIN AND ERVAY: “Johnson describes the result as ‘the most dignified building in Dallas.’ His only disappointment: The banking lobby is only six stories tall, not grand enough for his Napoleonic tastes. ‘We wanted to make it monumental, but the client said no ... It's not monumental at all. But then, you can't get disturbed when a client says no to something. You have to see it as an opportunity to try another form.’"[6]

"‘It seems no one actually comes from Dallas. It's a lot of [other states'] expats. That makes it really quite diverse, in a lovely sense. A city like New York or Boston lives on its credentials, its history. Dallas is in its future, not its past. It's a city that's still emerging. As an architect, that's really useful. I draw a huge comparison to Los Angeles. Both are young cities, car cities—but Dallas is about 20 years behind L.A.’"[7]

ON THE WINSPEAR OPERA HOUSE: “It’s a response to its place: downtown, the grid, the climate, the big umbrella. It’s a statement about Dallas.”[8] 2009

ON CONFLICT BETWEEN MUSEUM TOWER AND NASHER SCULPTURE CENTER: “I am very, very, very, very sad. Fifty percent for me and 50 percent for Ray Nasher. He was so proud of his museum, which was all about affection and passion. Ray was not born in Dallas, but he fell in love with Dallas. So how can you kill something like that? That’s why I’m terribly sad about all of this.”[9] 2012

“In Dallas I was designing for the people, not the place. Many of them had come from New York. It’s not like Houston, an oil city; it’s more like the East Coast. Dallas is really no different from New York.”[10] 2010

ON WHY THE MEYERSON SYMPHONY CENTER’S CEILING TILES MATCH THE FLOOR TILES: “‘Who would ever notice that?’ [Ross] Perot asked. Replied Pei: ‘I will!’ To which Perot said: ‘Well, you are I.M. Pei—and I am ‘I Will Pay.’”[11]

ON DALLAS CITY HALL: “There is a dialogue between government and business, and that is what Dallas is all about, eh? There we are facing each other, hopefully in a very friendly relationship, but different.” [12]

What the Critics Say...

Critics have also had their own opinions on Dallas and its star-studded cast of architects, suggesting this relationship with celebrity architects is not mutually beneficial. Here are their quotes on the Dallas Arts District:

“Is it a good idea to organize arts buildings in such a clear and concentrated fashion? Or does the more mixed-up Chicago way make better sense? … Even some of the architects who’ve designed buildings here privately refer to the district as an architectural petting zoo—long on imported brand-name bling and short on homegrown-urban vitality.”[13]

“Cultural buildings by Koolhaas, Foster, and their leading competitors can be as stunning and as aloof as runway models, looking at their neighbors in ways both haughty and wary.”[14]

“The Dallas Arts District will never be a part of a conventional city in the European sense: It is closer to the existential isolation of the convention centre or the starchitect-designed airport. It is both unique and unsettling, a glimpse of a future in which architecture and culture are imported to save a city from itself.”[15]

“A few isolated works of esthetic ambition might generate excitement, but in the end, they won’t transform a city any more than a star slugger will save a baseball team that can’t pitch and field. You can’t live in a museum or a concert hall. You need places to live, work, shop, learn, eat, and play.”[16]

Jenny Thomason, AIA is a project architect with OMNIPLAN.

[16] Lamster, Mark. “Architecture: Dallas Is Much More than a Collection of Buildings.” The Dallas Morning News, April 2013.