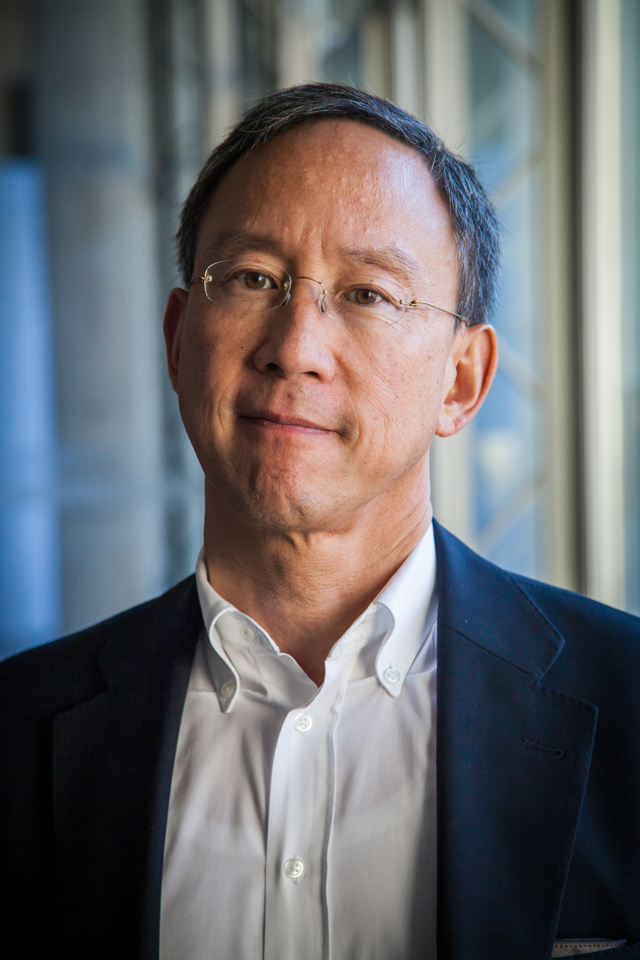 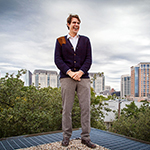 In the latest issue, Columns focuses on the practice of architecture, a seemingly more global trend as much as it is local. Can you tell us a little bit about your practice?

We are a very small practice. Currently there are four people working together with the two partners, Barbara Hoidn and myself. We were founded about 13 years ago now. Barbara worked for the Senate of Berlin as part of the architecture work, and she was eager to get back into private practice. I was director of the German Art Museum until 2000, and I was also ready to leave the world of museums and bureaucracy (basically fundraising) and get back into practice as well.

The two of us had actually met in Providence, RI, many years ago. We kept in touch and so we started with a very simple project of a restaurant interior, which was actually a very interesting project because the commission was coveted by a number of Berlin colleagues. It was one of those restaurants where architects, artists, and politicians frequented. I think most other architects would’ve loved to have had the commission, but they gave it to us, and I think we did a reasonable job. Since then, we essentially did some competitions with a lot of conversions―renovations (of 1950s buildings). The concert hall was a beautiful building of the 1950s.

Currently we’re completing a children’s daycare in Frankfurt, studies of energy, and a series of houses. So it’s been a very slow and long process for us because we are now in our mid-50s and most of our colleagues are already on their … I don’t know … 10th or 20th large building, and we’re still crawling around the small scale. But actually, for both of us it’s a wonderfully intense, detailed possibility to create architecture from the inception of meeting the clients to completion because we don’t actually hand over anything. All of our projects are on a scale where we are able to oversee everything to the handover.

In terms of actually dealing with the education part, we come and visit one semester a year; we split the professorship. Barbara teaches in the spring, and I teach in the fall, and we travel back and forth. Typically one of us is spending 10 weeks out of 16 here in the United States. Six weeks we’re back in Berlin. So that’s how things work and we cover the bases when the other partner is away.

It seems like your practice, then, has qualities of the academy and of the professional world. Can you talk about how those two things inform each other as far as a focus in a smaller practice?

It’s a very good point. Barbara, for instance, has identified sites in Berlin that she felt needed development. For example, the museum Milam, which is at the center of Berlin, is in a way bursting at its seams, and she identified the site right next to it on the other side of a canal. About 10 years ago, she gave it as a task to her students, and six years ago, the Senate of Berlin decided, “That’s a good idea; we’ll develop that for some museum as storage like exhibition space.” Unfortunately, we were never invited to the competition, but it was her work that initiated the whole thought. It was exhibited in one of the museums in Berlin.

Barbara then found another site right at the center as well, and set up once again a workshop for students which has since then also become a hotly debated subject.  I think we’ve been able to identify certain things of necessity to certain cities, but not to a personal gain, which you could say is a pity. But here we are, academic freedom.

From my point of view, I gave the task to design a central railway station in Buenos Aires that combines underground local trams and so on―taxis, buses―because Buenos Aires at the moment has four underground railway lines. They don’t come into a central station. They all end in dead ends. The railway tracks have a railway station about a mile away and the bus terminal is another 1.5 miles away, so all of these infrastructure elements are not coinciding.  I gave the students the task to design this central railway station as sort of a hub, which I think, is possibly an important debating point in Buenos Aires. I gave that task a couple of years later to students to design a high-speed rail station in Austin. In other words, I took the same topic back to Texas. And so there have been things like that, typically, the studios that we think about also have an application in Texas. For example, mixed-use development, mid-rise mid-density―how would you apply that in Argentina? But how would you also apply that in Texas? And so that’s how we conceive a lot of the studios.

Sustainability as a cultural problem … New direction of younger architects responding to new crisis, etc. … Can you talk about this direction in the larger context of the world and how that’s either causing real practice, or maybe more focus, in the academy? How are you adapting to these new ideas?

It’s a subject with which I’m going to talk about this evening, so I’ll try to put it in a nutshell. We have seen a rate of over-development in the last 50 years across the world, which has brought about a number of crises. The last one was in 2008 with Lehman Brothers crashing. Lehman Brothers was fundamentally tied to the property bubble. If you study the rate at which cities had been growing across the world―Europe, China, or the U.S.―we see sudden expansion in not just suburban development, but a lot of development as a whole, which is primarily financed through very loose loans and loan policies. So what you see is an incredible rise in per capita areas across the world, as well as the construction of world property and the construction of second homes … a lot of that in southern Europe. Why would anybody want to have a second home? People in southern Europe were encouraged to do that because it was a form of investment into some retirement funding. It’s okay if the value of the properties maintains, but if the value of the property is put in doubt in result of over-development, you know the bottom is falling out of the property market, and then of course you endanger the entire economy. You endanger the building industry, and so on.

So we, in fact, have a worldwide crisis in the way that we deal with property, and architecture is fundamentally tied to that. We’re being nurtured on the idea that what we should be doing as architects is to construct new, free-standing buildings, ideally on green field sites, and that’s okay if you have green field sites. But is it really okay even if you have green field sites? If you think about it and you look at the maps of cities―whether Dallas, Phoenix, Berlin, … the same thing is happening. You know, the onion is getting thicker and fatter, and you have to think, what does that mean in terms of mobility? Infrastructure? From public transport or even private transport, to the provision of schools, hospitals, and shopping facilities. What we see, if you do archaeology of that development, is that there has been a kind of naturalization of the system of corporate economy that was meant. Now we have kind of a centralized system of distribution where the individual manufacturer, the small-scale farmer, the butcher, the kind of family-run business, disappears. And we are all dependent on these very large systems whereby you get ridiculous situations: sows grown in Argentina and then shipped to the U.S. where cattle are. Spinach is grown in California,  packed in the Midwest, and then finds itself in New Jersey. So you wonder what? … Here’s a pound of spinach, and it’s come all the way from the Midwest and now is in the east coast. Does that really make sense? It makes sense if energy is cheap, if you have certain distribution networks. And if you think about the world of architecture, it’s worked the same way. We have people who are flying all over the place to flagship projects. ….

It’s set up a certain expectation among young architects that they have to be working internationally, and that there is a kind of pressure on being able to show up all over the place, which I think is a problem, frankly. And so if you have this internationalization, globalization, effect, surely with changes in energy costs for instance, but also with counter-movements such as slow food or “buy local, eat local“ you get the sense that is a counter movement that is opening up a second review of what Frampton’s critical region was about. But critical region-ism, 30 years after the initial debate, is completely different regionalism, because you know the pressures of international realization has gone so far. So what is now the region? If you acknowledge existing buildings as constituting the culture of your region, then you have to admit all of these are around are also part of your culture. So you can’t say let’s pretend to go back to something. What would be a Texan architecture? So the question about what is regional is a lot more tied to the kinds of questions of materials, and I think that is an interesting discipline. Some cooks say, in avant-garde restaurants, “No product has come further than 50 miles.”Well you know, for architects, if we limit ourselves too, it’s a real struggle. You can use some recycled materials, sure, but you really have to think very hard what it is that you can use.

If you were to go back to Berlin and continue your practice, what is something that you can take away from Dallas on which you can build other ideas? Is there anything about this place that comes to mind?

Especially this arts center here is a very strong reminder that there is a local patriotism where people, also together with tax laws, make that kind of giving worthwhile. There is a far greater sense of giving as a culture, than in Germany. In Germany, a lot is based on entitlement, which is obviously the kind of criticism that Republicans have of certain kinds of federal government systems here, but it is true that it has held back a certain social culture involvement on a broad level in Germany, and I think that there is not the degree of pride that people have when things happen because of private initiative. And I think that is a problem. So you know, while I think the U.S. would benefit from certain senses of entitlement systems, I think operations in Europe are quite commonsensical―like health systems. They’re not perfect, but I think that they work. Europe would benefit from the private enterprise mentality and private giving mentality.

Wilfried Wang was in town as a part of the Dallas Architecture Forum's 2013-2014 Lecture Series.