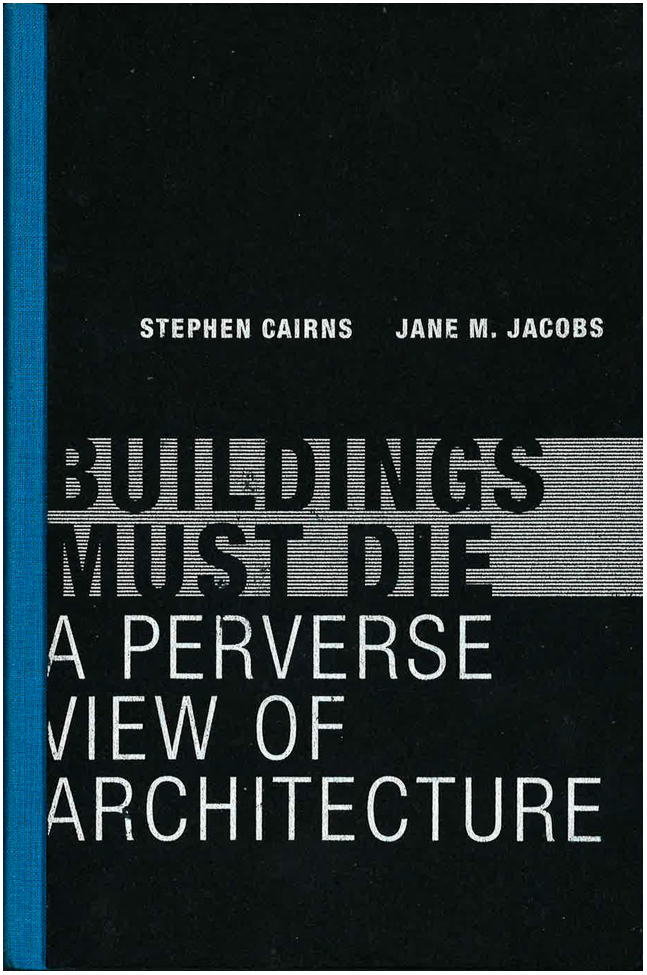 Critique: Buildings Must Die - A Perverse View of Architecture

“If architecture is invested with life … what of its death?”
Authors Stephen Cairns and Jane M. Jacobs*

As one can determine from the title above, this book (MIT Press) is not for the faint of heart. From the beginning, the authors construct a journey using quote after quote from a deluge of different architectural texts with seemingly one goal: to modify the architectural profession’s view of the life and death of buildings.

The authors declare: “In what follows, we seek to throw architecture with all of its own force toward its end. In doing so, we speak against architecture’s natalist fantasy of itself and its delusions of permanence, and for an architecture that tarries with deformation, decay, deterioration, devaluation, and destruction.”

The text encourages the reader to consider the root of the architectural profession’s aversion to the building death, first by relating the design and construction of built work with the creation of life—hence the “natalist fantasy” and then, by indicating the profession’s view of how constructed built work versus demolished or decaying built work can determine value within and outside of the profession. “Architecture exists vitally in the realm of concept, but it is also true that for most architects a fundamental satisfaction is found when their concepts are realized in built form.”

Overall, Cairns and Jacobs formulate a strong argument to determine architecture’s value outside of building permanence. However, the read is quite challenging (even for scholarly readers) with its frequent references of other texts and an excellent lexicon. A determined reader will be rewarded with a thought-provoking journey into how we think about the life and death of our buildings.

*Editor’s note: Co-author Jane M. Jacobs should not to be confused with Jane Jacobs, author of The Death and Life of Great American Cities.