A few short years ago, stepping off the Green Line at the Good Latimer station looking toward Deep Ellum, you would have seen Brad Oldham’s Traveling Man Waiting on the Train sculpture resting in front of a vacant lot. Today, a structure of shifting boxes 16 stories high consumes the view, overshadowing the sculptural piece but subtly creating a visual
transition from the tall skyscrapers of downtown Dallas to the much shorter streetscape of Deep
Ellum.

The Epic, designed by Perkins+Will, is a glass and concrete building with 250,000 square feet of rentable office space distributed among 10 levels, sitting above eight levels of parking, including two below grade. With a site on the cusp of Deep Ellum, scale was an important driver in the building’s design early on. The concept of shifting boxes originated in response to the need for an articulation in horizontality.

“The building, because it shifts, is horizontal over vertical and form over surface. We didn’t articulate the surface to get scale — we shifted the blocks,” said Ron Stelmarski, AIA, Perkins+Will design director. 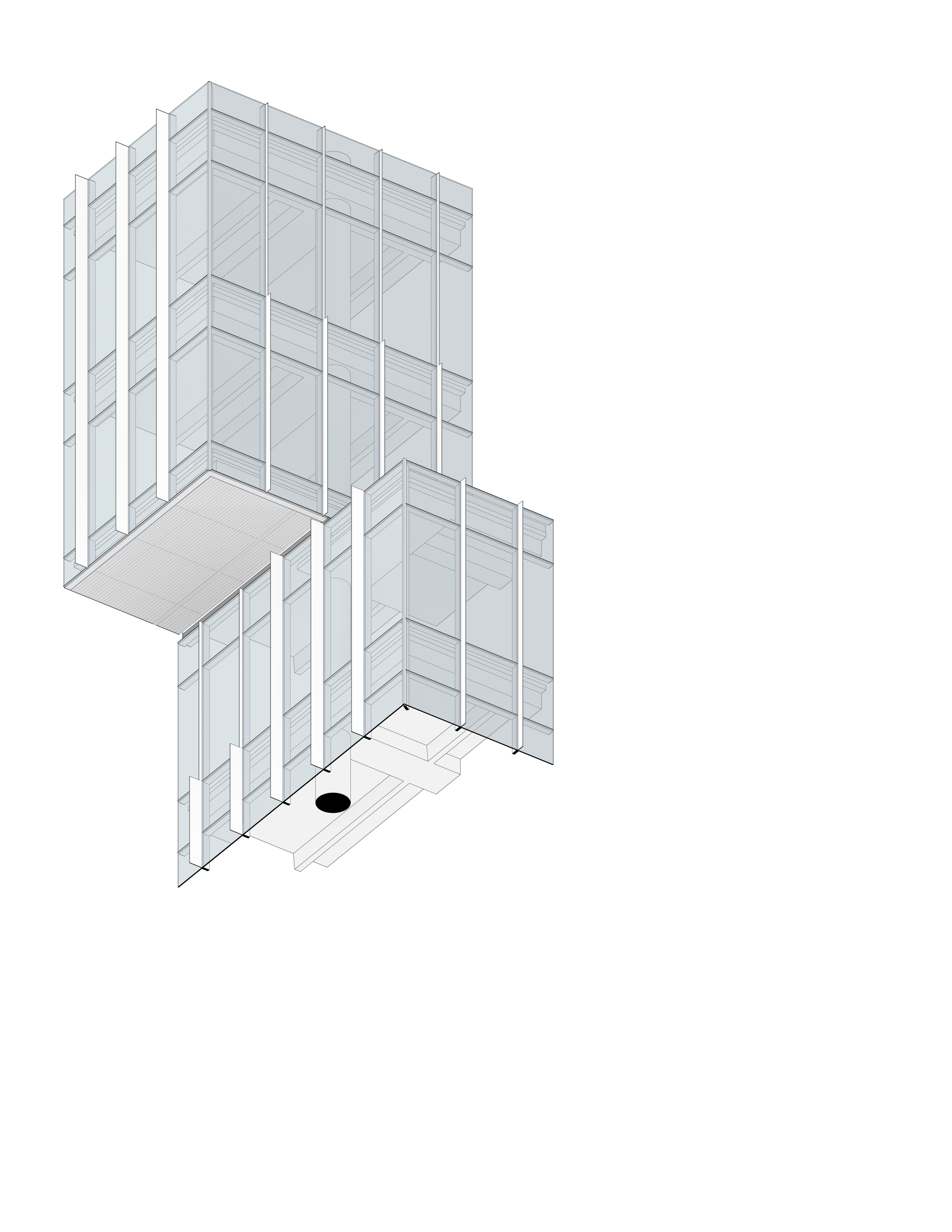 The vertical element gives the eye a reference point, but that line is broken with the shifting of the boxes. The vertical fins, with depths of 4, 8, or 12 inches, save 5% in energy costs. The more sunlight that hits the facade throughout the year, the greater the depth.

Departing from the form of a simple, extruded office building, the decision to shift blocks not only led to an interesting building form visually, but it also provided other benefits. The pushing and pulling of volume creates a shading soffit condition in places but also provides an

opportunity for balcony space. In turn, the availability of balcony space allows for activity to move from inside to outside for workers. On the other side of the volume, at each soffit condition, a lighted gasket is installed around the perimeter of the building, evenly washing the surface of the soffit at night.

“During the day the top parts of the boxes are occupied, and in the evening, they are activated with light,” says Ryan Roettker, AIA, project designer at Perkins+Will. “This detail not only creates a unique experience of horizontal light when so many buildings are vertically lit, but it also contributes to the horizontality, further mediating the scale of the building.”

This pushing and pulling of building form also provides the benefit of self-shading. Compared with an extruded tower, the shifts are projected to save the building 5% in energy use annually. In addition, Perkins+Will introduced a vertical fin element on the facade, highlighting the offsets of the building form and further contributing to sun shading. This vertical element forms a grain on the building, creating a reference point to the shift.

“Now all the sudden you have a point of reference — you had to create the grain to create the reference. That grain is also activating the surface and self-shading the building,” Stelmarski says.

The vertical fin depth varies depending on the location around the building; the fins are deeper where they benefit the building most, and the depth is reduced where that benefit is unnecessary.

Ultimately, having a supportive client was important. Westdale Real Estate Investment and Management understood from the beginning that the shifting boxes form was crucial. Once the move was established, Perkins+Will found that all these other design choices could harmonize to strengthen that move. 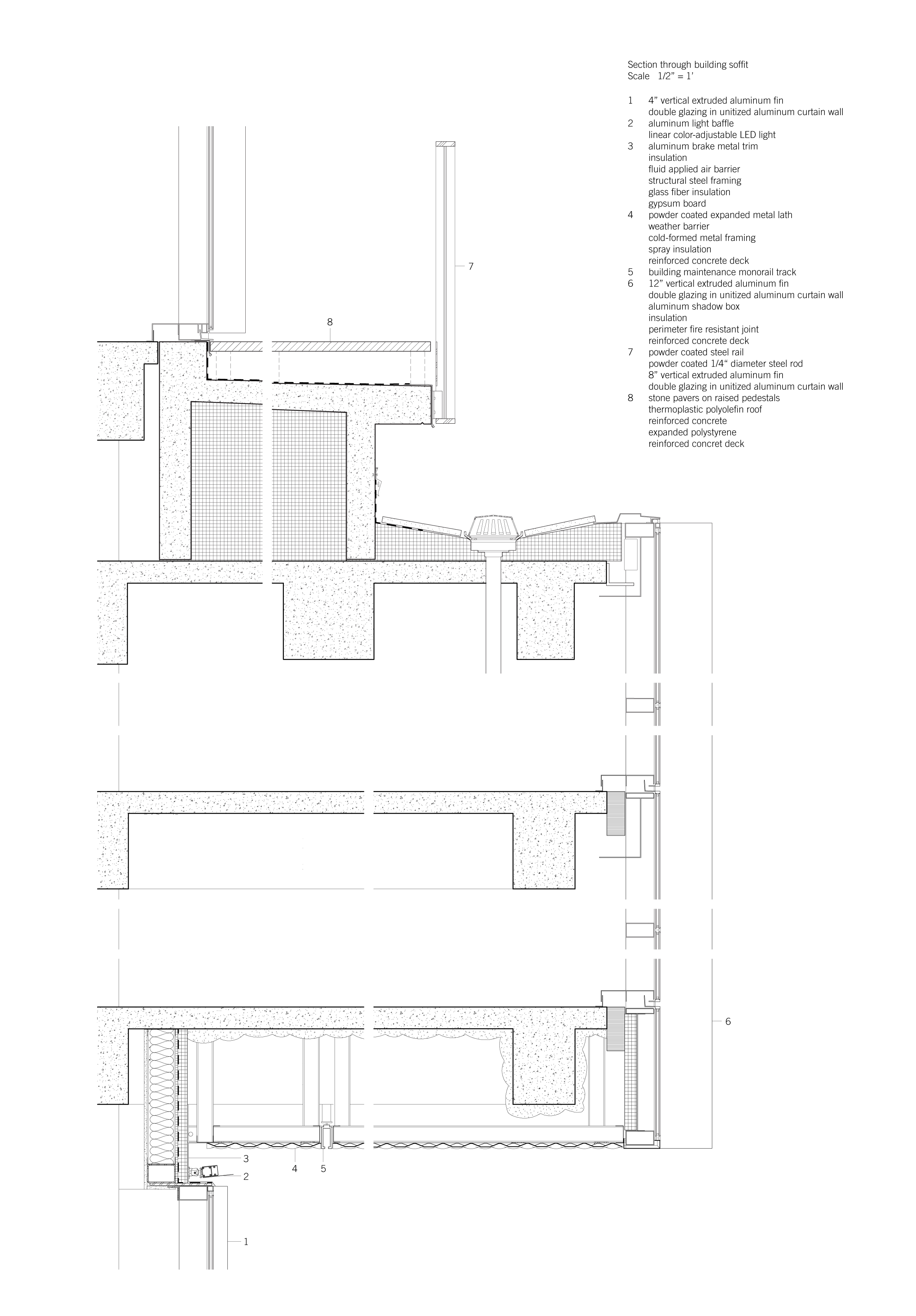 The self-shading effect of the soffits saving energy, the exterior space created with the balconies, the vertical fins that added a grain along with energy savings, the lighting at the soffits — all these elements derived from one design decision. 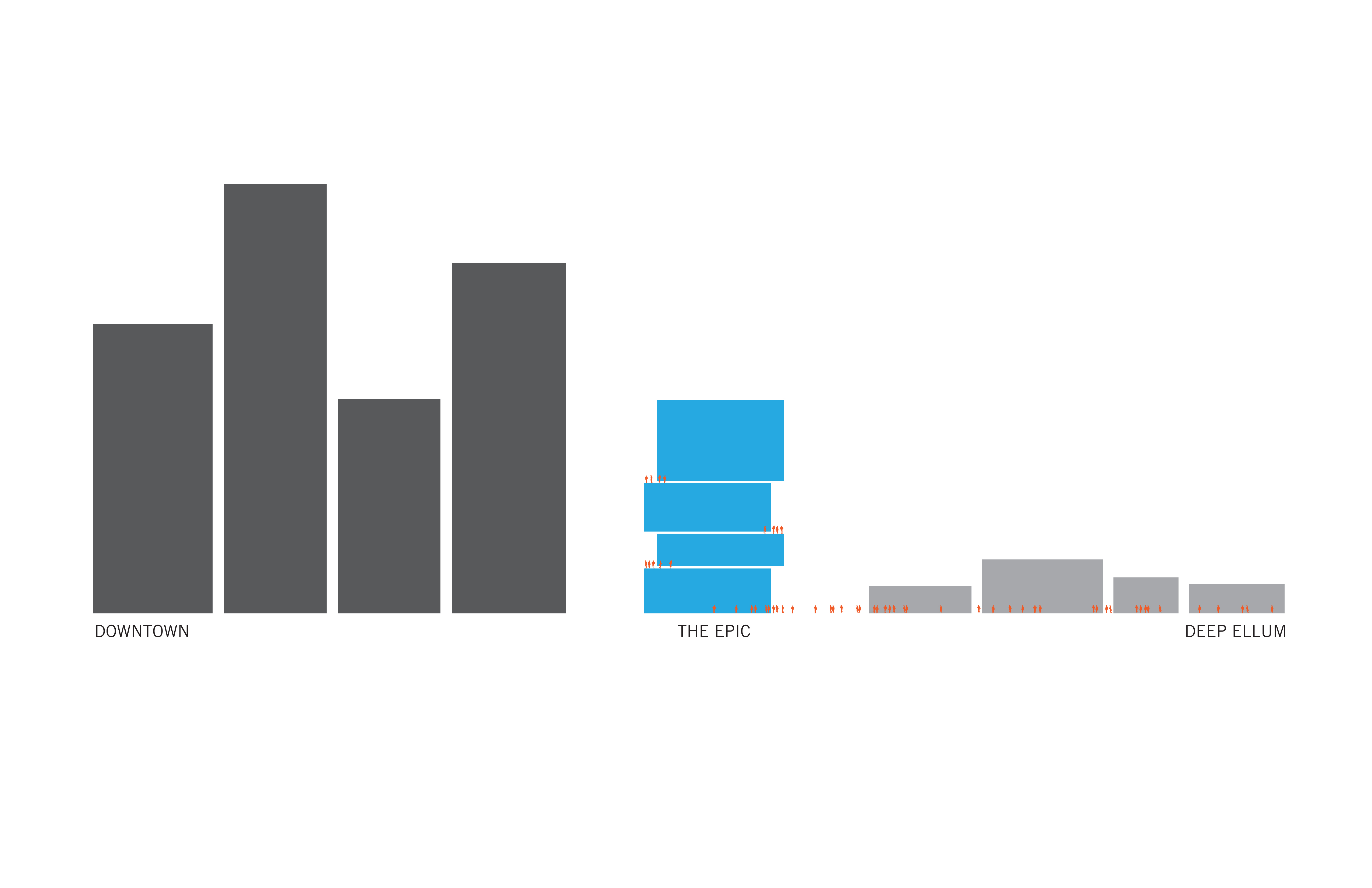 The diagram shows the transition in scale from the towers of downtown Dallas to The Epic to the low- and mid-rises of Deep Ellum. 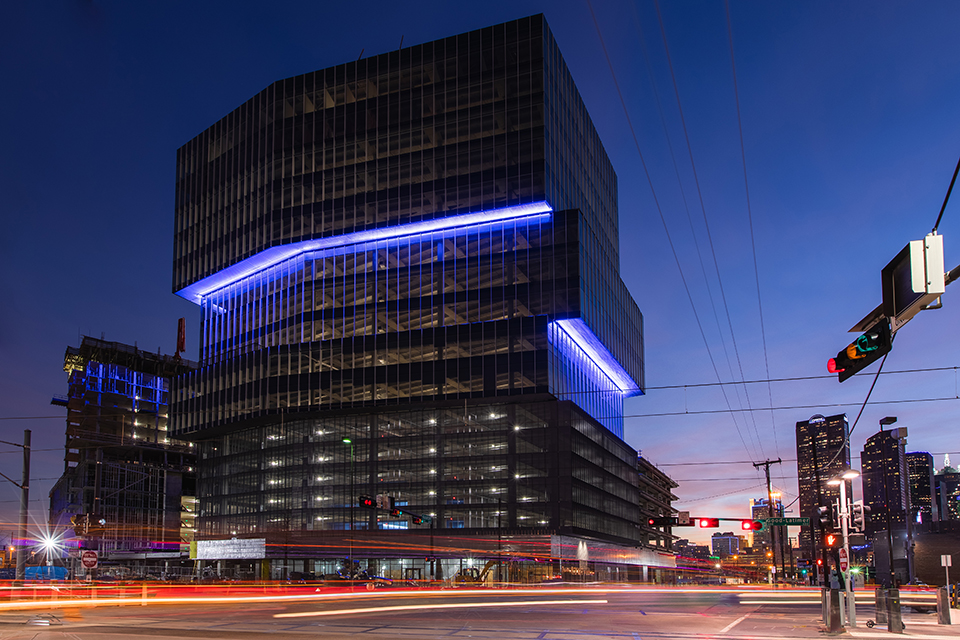 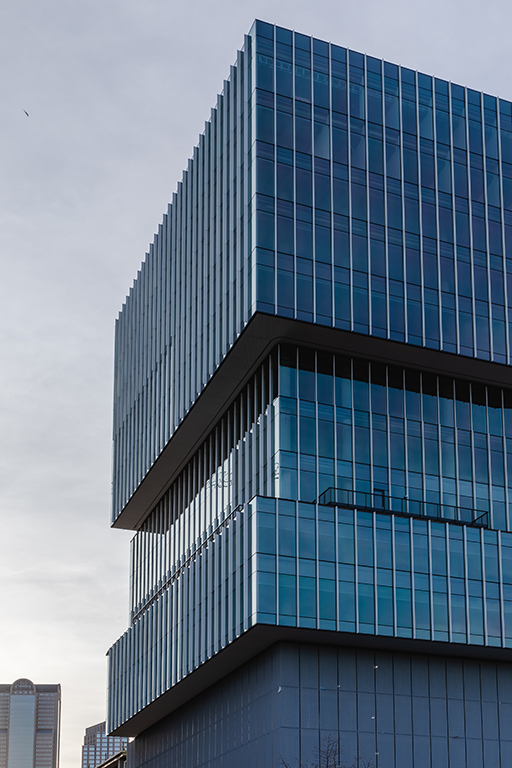 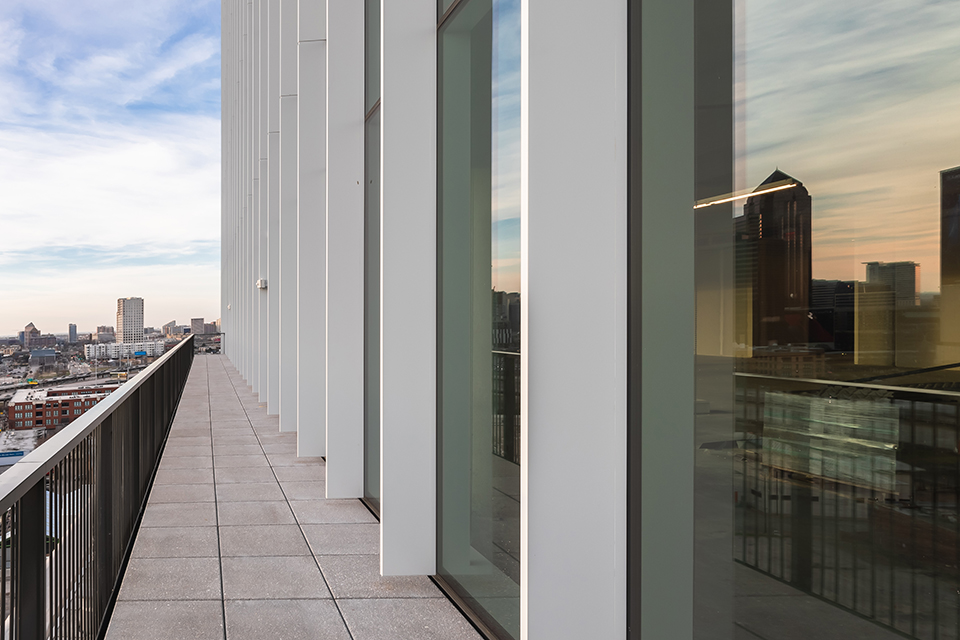 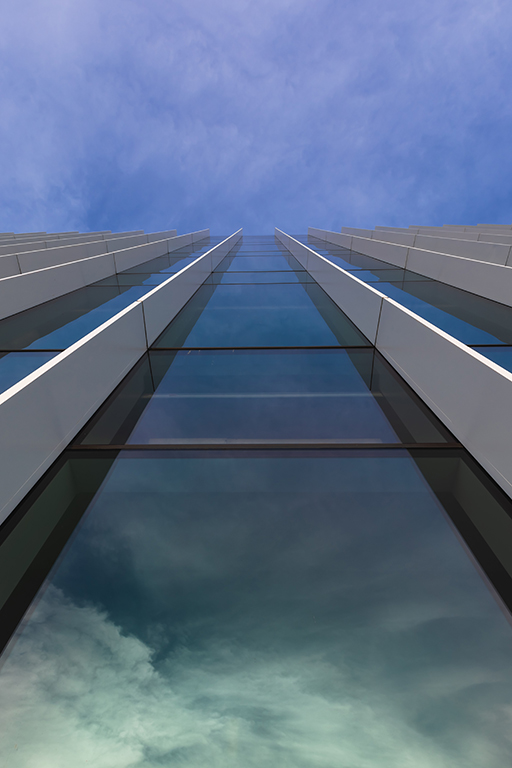 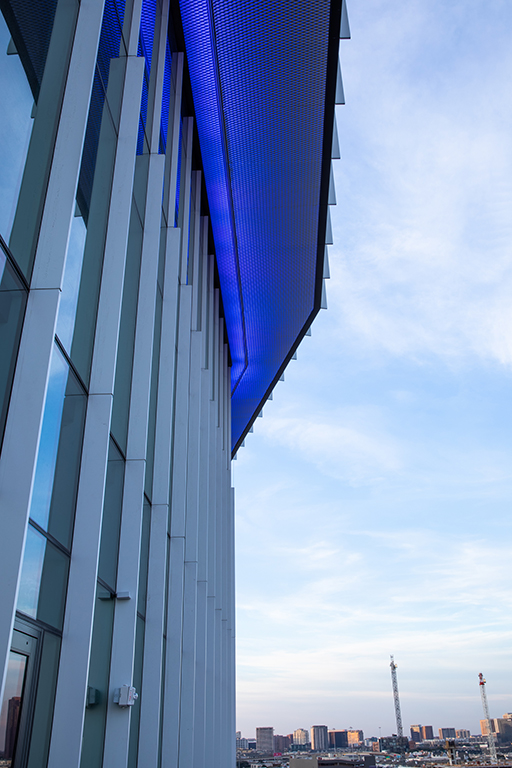 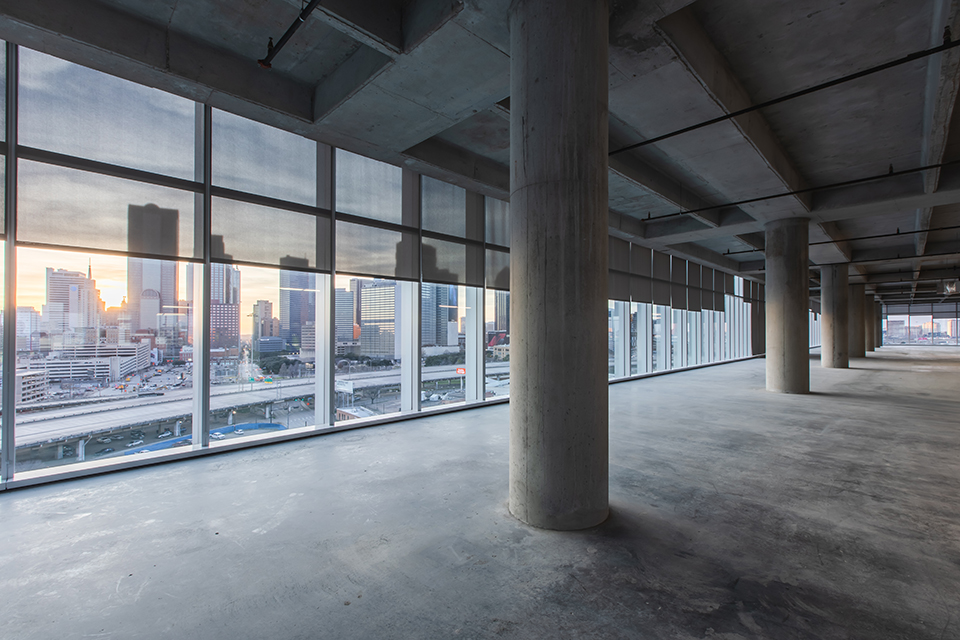 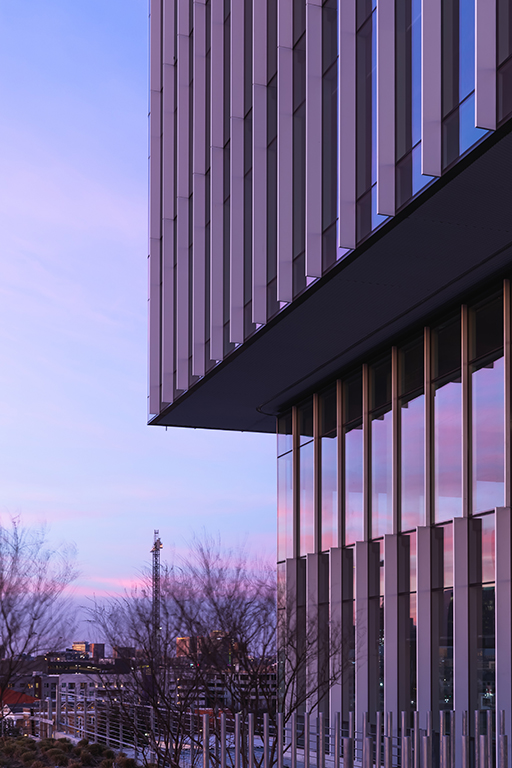