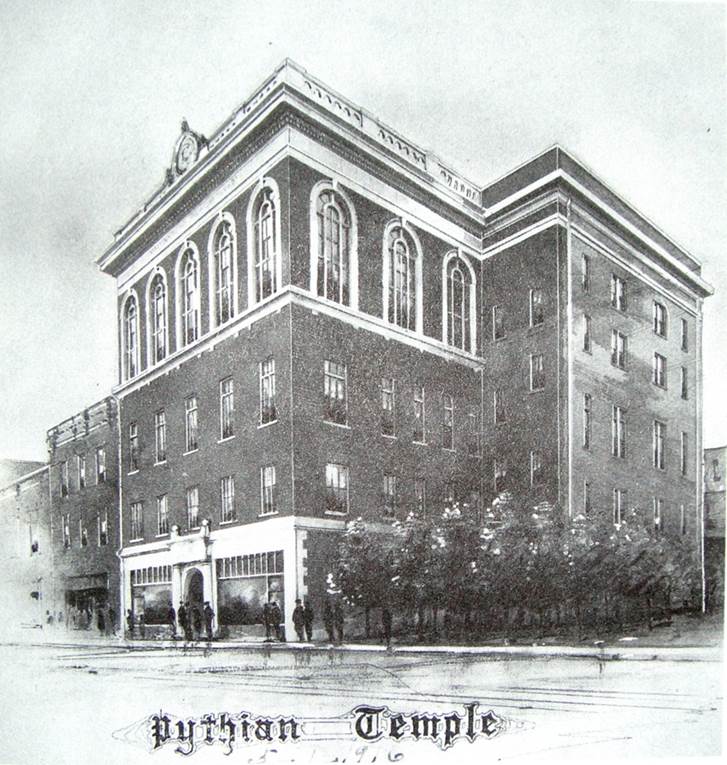 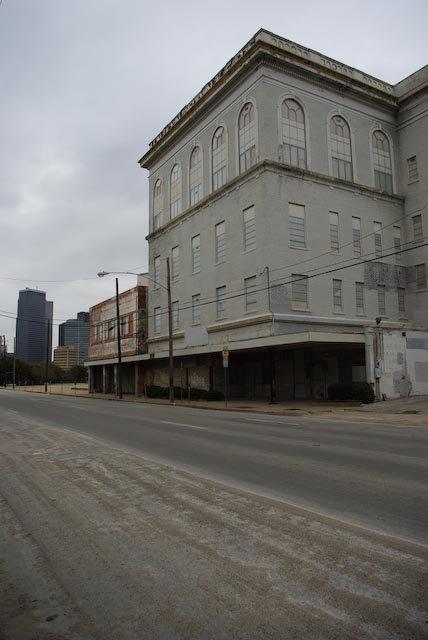 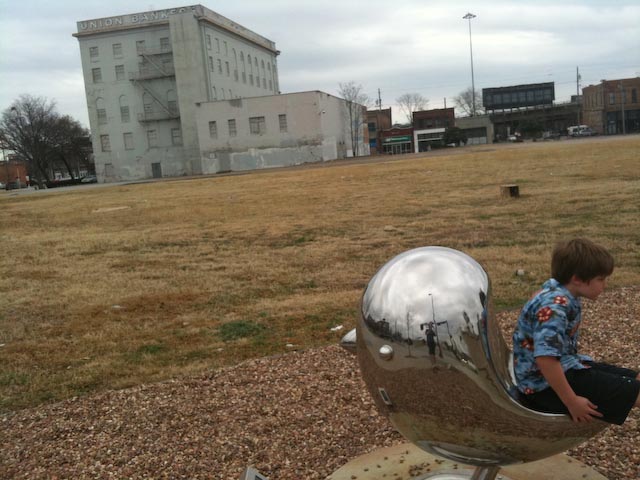 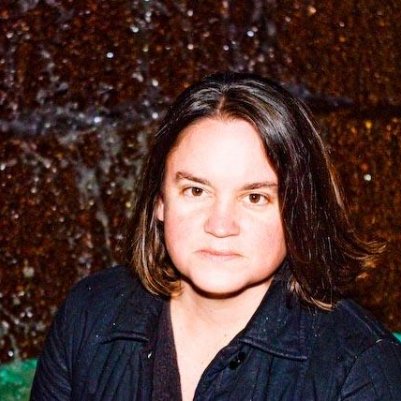 Thank you Kathryn. It was a great weekend. I can only hope that this will spark some interest in the saving and renovation of the Pythias Temple. Truly a Dallas Landmark.

Gone But Not Forgotten

I’d like to share a few brief words about the Dallas architect William Sidney Pittman (1875-1958) and one of his buildings, the Black Knights of Pythias Temple at 2551 Elm Street.  Pittman, widely acknowledged to be Texas’s first African American architect, was the designer of churches and civic buildings from Houston to Fort Worth that continue to resonate with us.  Though you might not know it to look at its condition today, the Black Knights of Pythias Temple is Pittman’s most important building, and one that is deeply significant for the entire region.  Sadly abandoned and left isolated in a razed city block, it is a ghost of its former self that deserves better treatment as a symbol of the tremendous vitality in the African American community in Dallas in the years before World War II.  It is a building that is worthy of our respect and rehabilitation so that it can become a vital part of our 21st century community once again.  The Temple became a city landmark in 1989 and is a priority for the preservation community and Preservation Dallas, perennially appearing on lists of the most important buildings in the city.  But it also reminds us of how fragile our link to our built history really can be.

Events like this weekend’s celebration of Pittman and his work are so crucial for nourishing what the historian Dolores Hayden called the “power of place” to foster an understanding for our history as a means of building a future.  In using the word “place,” Hayden referred to the way that our cities become a shared public landscape, one in which the experience of neighborhoods, buildings, and streets contribute to an ever-evolving story that binds all citizens together.  Though I could offer many reasons why Pittman’s Temple offers a powerful narrative of place that should command our sustained attention, I will focus on just two.

First, the building is a monument to the aspirations and success of the African American community in Dallas, built with funds raised entirely by the black Knights of Pythias, an independent branch of the fraternal order dedicated to education and professional life in the black community, especially in the American south.  It was dedicated at a ceremony on June 13, 1916 where over 2,000 attendees from all over the state and the country joined together in a celebration of the order’s new home.  Pittman’s design was grand, providing a visual and architectural symbol for the professional success of the membership and tenants of the building.  It drew on his training in the Beaux-Arts tradition at the Tuskegee Institute and at Drexel University, with its arched ground floor entrance and disciplined and formal classical façade.  The arcade of windows at the top level clearly outlined the volume of the ballroom, positioning this communal space as a crown jewel for the neighborhood.  When it opened, the Chicago Defender called it “one of the best buildings on this side of the Mississippi River.”

For the next 25 years, the building served its original owners as a center for professional life, sitting at the heart of Deep Ellum, an African American neighborhood filled with a wide variety of residences, shops, lumber warehouses, and auto service centers.  In 1938, the building was heavily damaged by fire of unknown cause, sustaining a reported $25,000 worth of damage, and the order eventually sold the building in 1944 under financial duress.  In 1959 it became the headquarters of the Union Bankers Trust, a seller of insurance, which moved in by October of that year.  The new owners altered the building, erasing the Pythian crest at the center of the facade and emblazoning their own name atop its parapet.  That erasure aligns with the radical changes that took place in the neighborhood during the 1960s, as the city began its planning for the erection of IH345 in the early 1970s, demolishing many of the remaining residences in the neighborhood and cutting Elm Street off from downtown, ensuring the further decline of the surrounding neighborhood. 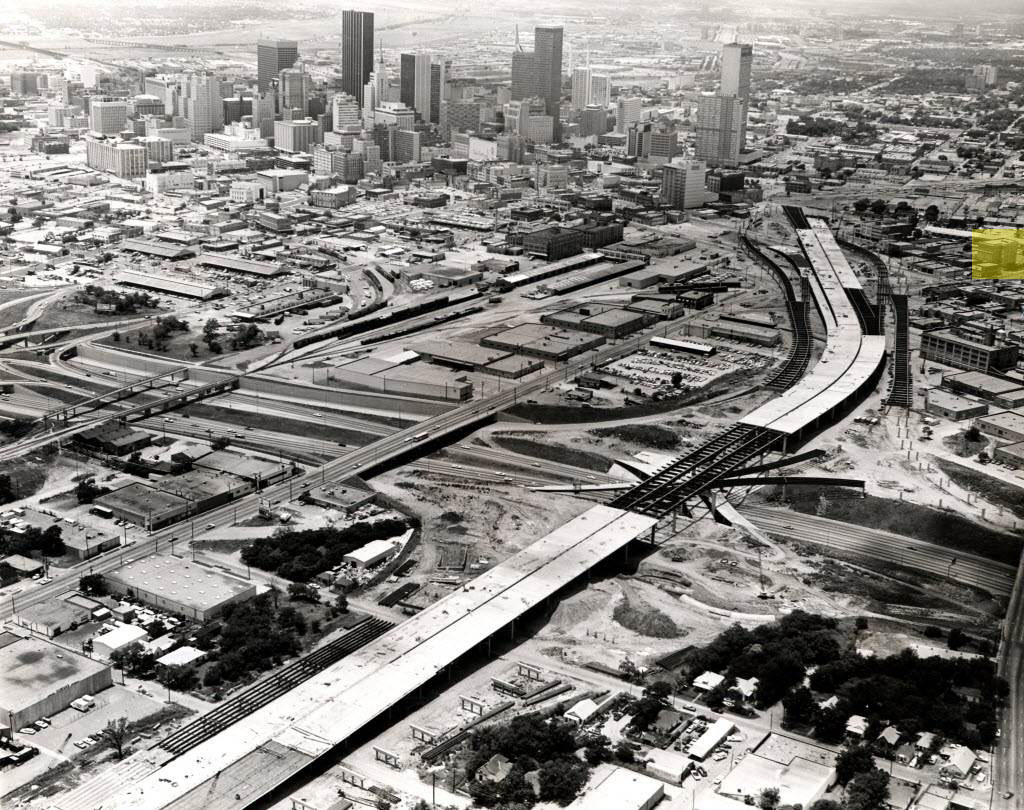 Above: The construction of IH345 in the early 1970s cut off the black Knights of Pythias building from downtown and contributed to the decline of the neighborhood.  The building is highlighted in yellow at right.  Image via Dallas Morning News.

This leads to my second reason for why the black Knights of Pythias building is so important to the city: its current state is a symbol for the mistakes of city planning and social policy that helped lead to its demise.  In most other American cities, a building by one of the first professional black architects in the country, occupied by the city’s first black lawyers, dentists, and doctors would be a prized possession, something celebrated not only by the African American community, but by the city as a whole.  Standing alone in an empty city block cut off from downtown, the Pythian temple is a monument to neglect rather than to rebuilding.

In my classes in the architecture school at UT Arlington I teach Pittman’s story and through the Dillon Center we have devoted resources to the subject as well, sponsoring a symposium in 2011 and supporting student work:   Lisa Richardson (UTA 2014) wrote an essay exploring the building’s history and meaning for Dallas today and Jacob Narvaez (UTA 2014), a UTA McNair Scholar in 2010, wrote a draft national register nomination for the building, titling his project with a quote from Booker T. Washington, “For the Right Thing and Not for the Wrong.”  But we need more than interest from historians and students to tip the scales.

I’d like to return again to Dolores Hayden, who has so beautifully explored the value of preserving places that represent difficult histories.  She poses the question “Can Americans learn how to respect and nurture a diverse urban public?”  Her notion of public, in which buildings that form the fabric of the city are a part of our shared urban experience, is at the heart of the matter for the Black Knights of Pythias Temple.  Pittman’s skill, the optimism with which he and his clients entered in to the project to build the temple, and the years of vibrant occupation should trump the years of neglect.  We can rephrase Hayden’s question to ourselves: “Can Dallas learn to respect and nurture a diverse urban public?”  I would hope that these events celebrating Pittman’s impact on the city are further steps in the right direction and that others – architects and citizens – will join in the celebration of the Temple’s legacy.

From remarks delivered by Kate Holliday
Director, David Dillon Center for Texas Architecture
Associate Professor, School of Architecture, University of Texas at Arlington
“Gone But Not Forgotten”: A celebration of the 100th anniversary of the arrival of William Sidney Pittman in Texas
African American Museum
Friday, April  25, 2014