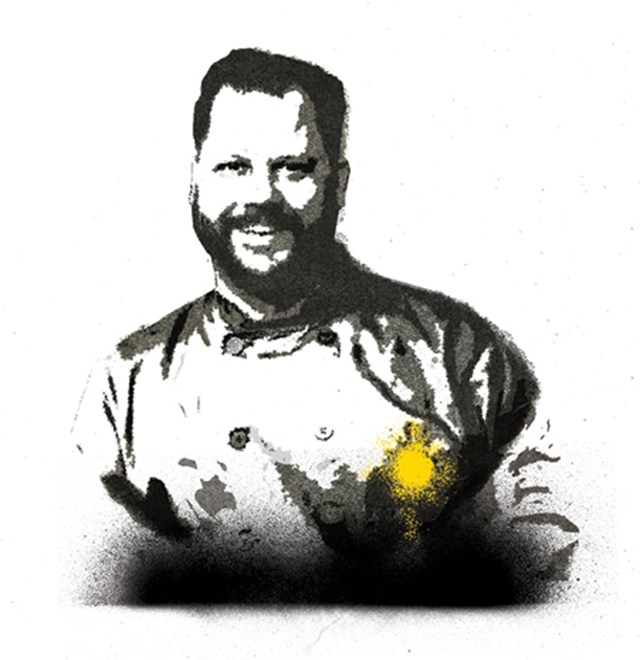 Light at the End of the Tunnel: The Delicious Serendipity of Vacancy

Chad Houser is the founder, CEO, and executive chef of Café Momentum, which he often describes as “taking kids out of jail and teaching them to play with knives and fire.” His charisma and passion to teach life, social, and employment skills to Dallas’ most at-risk youth have made him a local and national figure celebrated in dining, philanthropic and business publications. After 17 years as a chef, Chad sold his partnership in Parigi Restaurant to devote his full attention to running Café Momentum in 2012.

The restaurant Café Momentum serves fresh, locally sourced, sophisticated American cuisine in the heart of downtown Dallas at 1510 Pacific Ave., across from Thanks-Giving Square. Every meal is prepared and served to its patrons by an award-winning team of chefs, as well as the young men and women involved in the program. Café Momentum provides a transformative experience through a 12-month paid internship for young men and women coming out of Dallas’ juvenile facilities. The program rotates its interns through all aspects of the restaurant, focusing on life and social skills, coaching and development. In addition to the restaurant staff, Café Momentum supports its interns with a case management staff to help them achieve their greatest potential.

Two years ago, Houser was searching for a solution to housing and essential personal development resources for the kids who work, and grow, at Café Momentum, which was most recently rated No. 3 on Eater’s “The 38 Essential DFW Restaurants, Winter 2018.” I had the privilege of speaking with him about Café Momentum’s most recent endeavor to fill the vacant tunnel space below the restaurant. What surfaced was a bit of serendipity between the notion of providing resources for Dallas’ “throwaway” kids and activating the vacant spaces. Following are excerpts from our conversation.

In this issue, we’re speaking about vacancy and what people are doing differently to address our city’s vacancies in a sustainable and innovative way. There’s been a lot of whispering about you opening something up in the tunnels below Café Momentum. Can you tell us more?

So about six months after the restaurant opened — about 21/2 years ago — we were having issues and concerns about housing for our kids because so many of our kids are homeless. I didn’t know what to do, so I reached out to Kate Canales, who is a professor and director of design and innovation programs at the Lyle School of Engineering at Southern Methodist University. Kate leads a graduate class that does study on human design, so her class did a very intensive yearlong study regarding housing as it pertains to our kids.

It was a very immersive and intensive study, and the conclusion they came to was that our kids are not going to engage in housing in any traditional sense because they don’t trust the system. A lot of the housing offered to them, no matter how well-intended, is stuff they don’t trust. They just don’t trust any type of system because they’ve been burned so many times. The idea of us trying to put them into some sort of housing was failing. One of the things they found specifically was that by providing some sort of stability and support in the restaurant and restaurant space, we are actually initially indirectly—eventually directly—solving the issue of housing because we’re creating a safe environment for them where they can continue to build trust and resourcefulness … on their own.

Her class’s recommendation was to build some sort of facility, a kind of community center, that would allow us to aggregate our current resources and expand our effectiveness, and also expand the resources we could provide with an actual space to leverage them through. That, in turn, would allow us to increase our hours of influence and impact with the kids. In other words, if they come up through this center in the morning, they could do schoolwork, they could do some art classes with us, they could do yoga, meditation or therapy, and then go to work. All of a sudden, they’re going to be with us for 14 to 16 hours a day. So our influence takes over the pressure that comes to them from the streets or any other negative influence.

So that’s what we’re doing in the vacant underground downtown tunnels. We leased a space, and we should hopefully start demolition soon. But it’ll be just that. It’ll be a space for our kids to be able to go, and it’s a safe, calm, nurturing environment where they can continue to grow themselves as a person and utilize and leverage more and more of the resources we’re providing.

What other help did you have? What other resources are down there?

We have a county commissioner, Teresa Daniel, who has been a huge supporter and advocate in getting this open, and she has pooled a lot of resources, including Parkland Hospital, which has given a cost commitment to put a screening commitment down there. There’s also another nonprofit organization that just launched named Poetic, which has worked with young ladies who have been sex-trafficked. They signed a lease in the space next door to us.

It’ll create a really nice hub of resources for the kids. My hope is through tracking data and expanding the data we track through this community center, we’ll be able to have some solid statistics to give Commissioner Daniel, and they can open these things up all around southern Dallas as resource centers for homeless teens or teens who need help and need similar resources. Because ultimately these will be centers that are truly meeting them where they’re at, as opposed to the one-size-fits-all solutions, nor the “you’re going to take these resources and you’re going to like it and thank me for it.”

Do you think that this could serve as a model or guide when opening other Café Momentums? Would you want to take advantage of restaurant spaces with adjacent vacancies?

I think we’re extremely fortunate the tunnel spaces have been abandoned for 12 years. And they’re literally beneath the restaurant. That won’t necessarily be the exact circumstance when we do open another restaurant. But it is important. One of the reasons we’ve had the success that we have had is the direct result of the holistic approach to helping the kids. We’re building an ecosystem of support around them. And again, we’re meeting them where they’re at, with their needs. It’s not us telling them what’s best for them. It’s us talking with them about their needs. Together we figure out which is the best solution and what is the best resource for that specific need.

Was this an issue that you wanted to tackle as part of your game plan for Café Momentum? Do you recommend similar organizations with similar issues find resources in human-centered design?

We should always be hunting resources. If you look at the most successful organizations and individuals, companies, they are very well networked and have accumulated a litany of resources they can call on for whatever they need at any given time. Like in our everyday lives, even with social media when we’re looking for recommendations for plumbers, electricians, hairdressers, dinner, or whatever it might be, that’s how you get ahead and progress.

So do you see more leases in the tunnels? Or do you think it will be just Café Momentum for a while?

I don’t think I’m smart enough or versed enough to answer that question. It was an 18-month process for us to finally get a lease agreement from the city, and a lot of it just had to do with the fact the city didn’t know what they wanted to do with the tunnel space. We were told there was no foot traffic down there. But that’s not what we needed.

It was all through the city, then.

Yes. The city owns the space. But to answer the initial question, what a great opportunity there was in that particular section. I understand that tunnels suffocate the street level downtown, but it’s usable space—so why not put some support services down there that don’t necessarily stifle consumer traffic at street level? That’s what we’re doing in our one little corner of the tunnel, where we have multiple organizations that are working with similar populations going in. I think it’s really cool, and it’s a great way to recycle a space.

It’s supporting the street level, not taking anything away from it?

When the center underground is in place, what are the plans for Café Momentum? Expanding to satellite restaurants? Team growth? Will this help that growth?

I was quoted over a year ago that I wanted to open up more Café Momentums than Starbucks. There are 27,000 Starbucks, so I’m a little bit behind. But it’s actually really more about quality first. We need to stay true to our mission, which is to help our kids achieve their full potential. So we’ll grow slow and steady and do it the right way. We’re not going to just jump at the opportunity to pat ourselves on the back because we opened up another restaurant. That’s a quick path to failure.

I’m very proud of the program that we’ve built. I’m very proud of the work that we do. The fuel and the glue behind how it all actually works is people coming to the restaurant to have dinner. When our patrons come in here and spend the evening with us, they’re sending a direct message to our kids that they matter. They’re telling our kids they believe in them.

These are the kids the juvenile justice industry has termed as “throwaway,” which means they’ve been discarded since the day they were born through any combination of home, street, neighborhood, school or gangs. Whatever the case may be, it becomes a scarlet letter they wear on their chests that says, “This is who I am.”