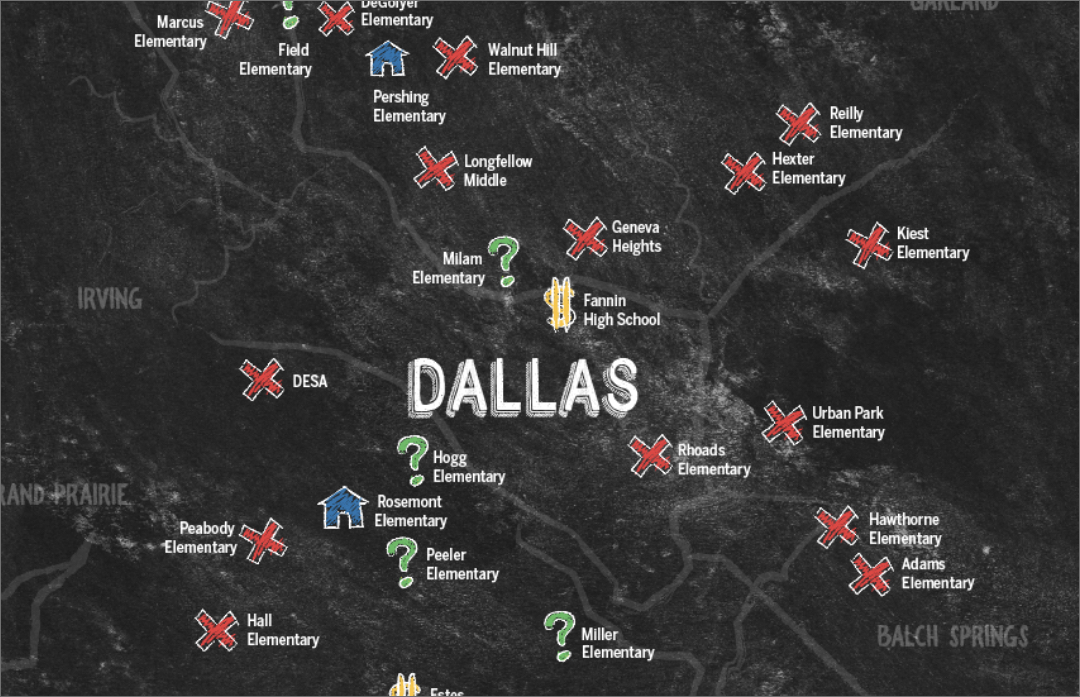 One of the most powerful drivers for where people, especially families, decide to live or purchase homes is the quality of neighborhood schools and the school district. It’s the old real estate adage of “location, location, location,” and schools are one of the major draws along with affordability, proximity to jobs, and amenities such as parks, shopping, and entertainment. According to a 2017 National Association of Realtors study, the under-36 crowd is now the largest home buying group, with almost half of them having at least one child and almost half of them saying that school districts play a big role in their decision.

Good schools and school districts increase a property’s value and command a premium in the real estate market. Look no further than the desirability of the schools in the Highland Park Independent School District (HPISD) for an example. In a 2016 study by Realtor.com based on data from GreatSchools.org, HPISD had an above average school rating and the property value of homes within the district was an average 632% higher than the national average. (Of course, median income also plays a factor in that number.) Although Dallas ISD doesn’t have the cachet of HPISD, there are certain higher-performing schools and feeder patterns that help increase the price of the nearby homes.

In September 2018, DISD announced its long-range Strategic Facilities Plan (SFP) for its schools. The ambitious plan called for demolishing or closing 47 outdated schools and replacing them with 25 new schools where students will be consolidated. The plan, among other things, would lower the average age of the district schools closer to the national average of 44 years. Of the 221 campuses in the DISD, 99 are over 60 years old, putting the average age at 51.7 years. The SFP would have brought down the average age to 41.6 years.

But the plan didn’t sit well with many parents and some members of the DISD Board of Trustees as they digested the large scale of the plan and the impacts it would have on schools in their neighborhoods. Parents were upset by the potential closing of nearby schools and sending their children to a school farther away. For those who bought houses in specific locations because of specific schools, it was stinging that the district proposed to change the school feeder patterns for many areas of the city. Even though the plan was only announced and not finalized, angry parents began contacting DISD administrators and trustees. Parent groups at the schools put up signs, in English and Spanish, asking other parents to sign petitions to keep their schools open. Geneva Heights Elementary School parents had such strong community support that they got an agreement from DISD to keep the historic shell of the 1931 building and rehabilitate the interior to meet new needs.

An updated plan, titled Version 1.1, was released in November 2018 and greatly reduces the number of school closings and demolitions. The new plan looked at three criteria for determining the fate of schools — the facility condition, the enrollment, and the age of the school. The new version proposes two school demolitions, two school closures, 17 new campuses, with decisions to be made on six schools. Although only two schools are listed for demolition, there is more to it than that. The new campuses would be built on the sites of the existing schools, requiring their demolition in the process. So that really adds up to 19, not two.

The schools selected for demolition and replacement are scattered all over the district and date from 1912 to the 1960s. They range in style from Revivalist to Mid-Century Modern, with many designed by significant Dallas architects such as Mark Lemmon, Lang & Witchell, C.D. Hill, Coburn & Smith, and Broad & Nelson. The schools proposed for replacement include Adams, Atwell, DeGolyer, Dallas Environmental Science Academy, Geneva Heights, Hall, Hawthorne, Hexter, Kiest, Longfellow, Marcus, Peabody, Pease, Reilly, Rhoads, Thompson, Urban Park, and Walnut Hill. Fannin is to be repurposed or sold. Schools awaiting their fate are Field, Hogg, Milam, Miller, Peeler, and Twain. The massive plan depends on voters passing a multibillion-dollar bond in 2020. 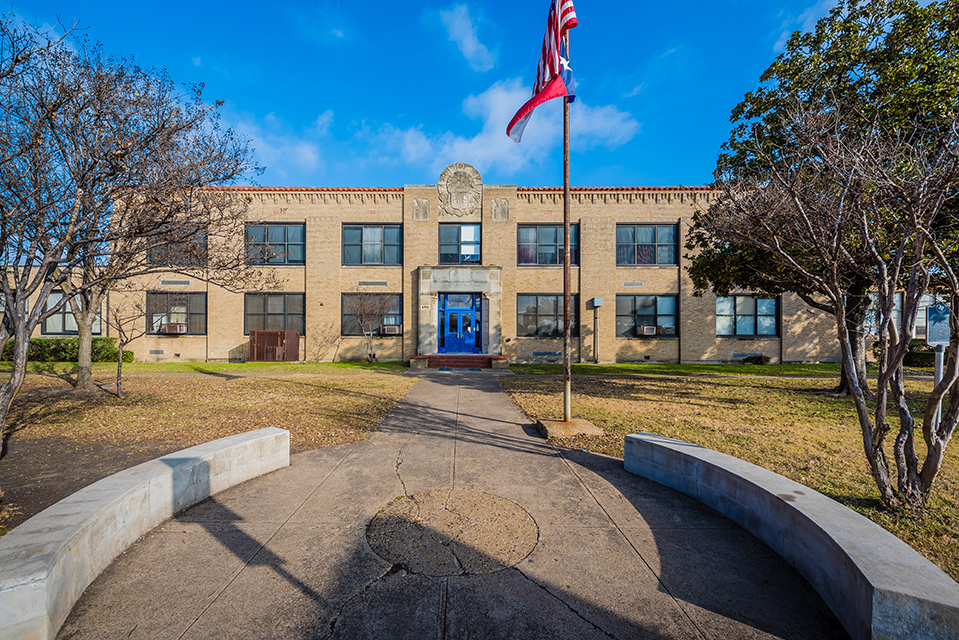 The Urban Park School is on the DISD's list for replacement in the Strategic Facilities Plan - Version 1.1. The school has an interesting past as it was constructed in 1930 as the Peacock Military Academy and closed in 1934 due to bankruptcy. The school then became part of the DISD and has remained open since 1938. A large peacock emblem for the military school is still visible over the main entrance. // photo credit: Michael Cagle

One of the drivers of the selections for replacement or demolition was DISD’s facility condition index (FCI). Architecture and engineering firm PBK served as the lead in evaluating all of the schools in the district to determine the FCI for each. That was compiled into a 2,500-page Long-Range Facilities Master Plan released in October 2018. The FCI looked at such major items as building envelope condition, life safety and security, electrical, plumbing, mechanical, technology, civil, athletics/activities, and food service. The study also included items that weren’t as major, including ceiling tiles, baseboards, casework, signage, sound systems, lighting, and many more. Each school was ranked on a 100-point basis, with the higher the score, the worse the school’s condition. Those scoring 70 or above were on the consideration list for replacement. The five schools scoring the highest were: Hawthorne at 98.72, Peabody at 91.79, Rosemont at 91.39, Geneva Heights at 91.02, and North Dallas High School at 89.24.

At a public meeting in December 2018 at Geneva Heights, in the Lower Greenville area of Dallas, DISD administrators said schools were picked for replacement based on the FCI and the inadequacy of the facilities to serve their current number of students. They specifically cited libraries, cafeterias and kitchens, auditoriums, gymnasiums, and offices. That is certainly true as many older schools were not designed for their current capacity and added wings or portable buildings to meet needs. In turn, the number of students soared beyond the schools’ original capacity. While new classrooms were added, other spaces went untouched and left handling far more students than planned for by the architects who originally designed the schools. Older schools also may not meet current educational standards for classroom size, technology, and even outdoor space.

Tearing down schools would fail students

Most schools on the chopping block are historic, based on the national standard of buildings being over 50 years old and vital to the sense of place in the neighborhoods they anchor across Dallas. These community landmarks were built to last, with substantial materials and a high level of craftsmanship and design. Despite that, if the resources are not there to properly maintain the schools, they deteriorate. And many on the proposed demolition list, especially their mechanical systems, have declined significantly over the years.

There is also the allure that a new campus brings, along with the thought that it will ease the maintenance budget. That’s true in the short term, but over time those buildings will also require maintenance. Then there is the cost of demolition and new construction to consider in determining whether there will be a cost savings in the long run.

Consider also the lesson that tearing down a usable building teaches children. It says that the embodied energy and the raw materials already harvested in construction of the built environment are worthless. We teach our children the importance of reducing our impact on the environment by recycling everything from cardboard to plastic to cans instead of sending them to the landfill. So why doesn’t that apply to the built environment? Why aren’t we teaching that same lesson to our children about the reuse of existing buildings and recycling what is already built instead of sending a massive amount of needless waste to our landfills? What example do we set when we expend a tremendous amount of new energy to harvest natural resources and shape them into building materials for new schools when we can recycle what is already built?

“It takes 10 to 80 years for a new building that is 30 percent more efficient than an average-performing existing building to overcome, through efficient operations, the negative climate change impacts related to the construction process,” the trust said.

The rehabilitation of DISD’s existing schools and expansion of those structures should be fully explored to see how the needs of the district and educational trends can be met. There are many options that would both value the original buildings, such as targeted demolition of ancillary additions and the rehabilitation of the original core structures, while adding new spaces to accommodate the needs of larger schools. In fact, in the FCI study, PBK identified areas where schools could be expanded to meet current requirements.

DISD already has great examples of how that can be done. One is Booker T. Washington High School for the Performing and Visual Arts, the significantly historic high school in downtown Dallas. In that case, the original portion of Dallas’ first high school for African Americans was restored and an addition built on the rear to serve its new arts-focused curriculum. This could be done on other campuses, with creative architects coming up with ways to incorporate the new with the old.

Another example is Woodrow Wilson High School, which was rehabilitated and a sensitive addition built to meet modern educational needs by BRW Architects and Norman Alston Architects. The work even won a Preservation Achievement Award from Preservation Dallas in 2016.

In an effort to call attention to the potential demolition of so many historic schools, Preservation Dallas placed DISD schools on its Most Endangered Historic Places list in 2018. Preservation Texas followed suit in 2019 by also placing the schools on its endangered list. Both organizations hope DISD will explore options for keeping the historic schools intact, making judicious alterations to the interiors and sensitive additions to the exteriors to meet today’s requirements for education.

A blend of old and new would celebrate the powerful importance of the existing schools to their neighborhoods and teach the benefits of recycling our built environment and not adding to unnecessary waste to our landfills. Historic schools are too important to lose, and DISD should make every effort to continue their use and preserve an important part of our Dallas neighborhoods.