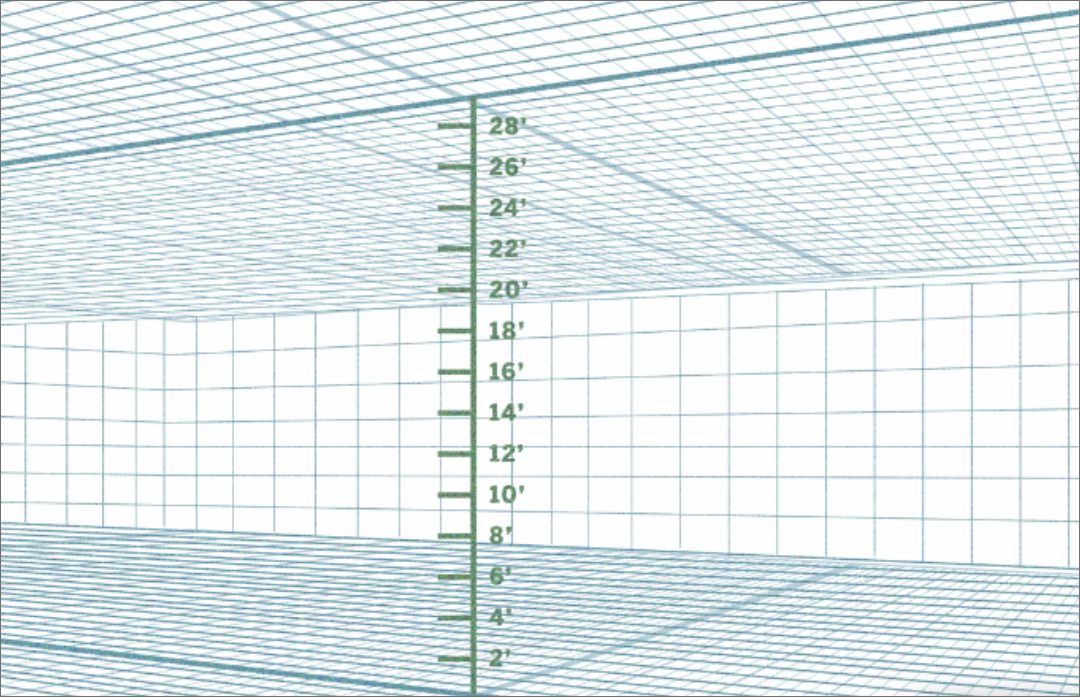 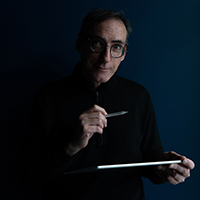 As an architect with a particular interest in perspective, sketches, and rendering, I want to explore the evolution of perspective and how the tools of architects have evolved. The opinions and experiences are viewed through the lens of my own workflow over the years, so others may have different observations.

It is fitting that the concept of perspective is attributed to an architect. Filippo Brunelleschi (1377-1446) painted the Baptistery in Florence in a compelling new way that gave the scene a discernable illusion of depth. Because there was a logic and methodology to his discovery, other architects and artists began to incorporate perspective into their work as well.

The idea of perspective gave architects the ability to design volumetrically and to study proportions and scale as a whole, thereby informing the overall composition.

In the centuries since, perspective has retained its place as the foundation of 3D representation. The principles have largely stayed the same, but the methods of constructing perspectives have slowly evolved.

It was essentially a drafting exercise that began with a plan view, skewed at typically a 30- or 45-degree angle, and then extending projection lines down to a tick mark representing the viewer’s location. Where those lines crossed the picture plane, additional lines were drawn straight down to achieve depth. Building heights were referenced from true elevations, using the same sheet. (Younger readers can be forgiven if they are a bit confused. Older readers can have a beer and rejoice that they no longer have to go through this painstaking process!) 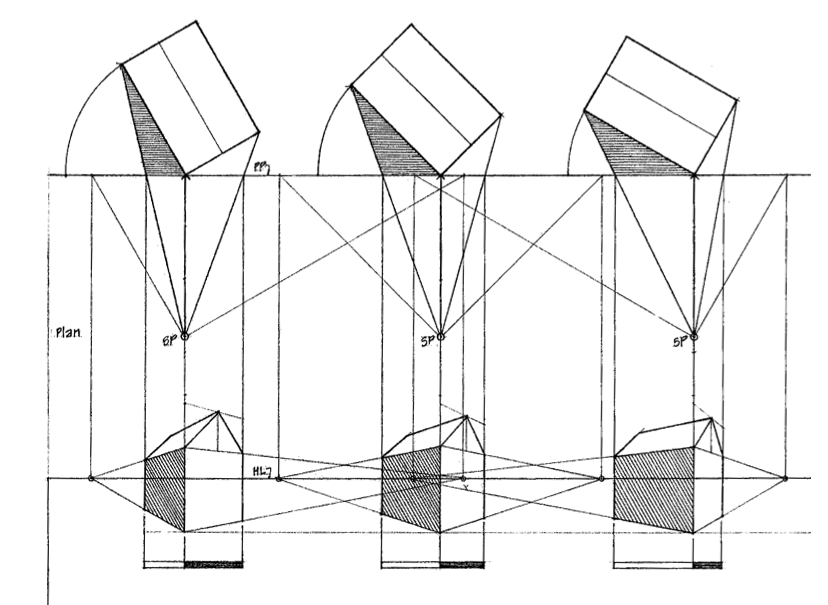 There were other methods, not the least of which was just fudging it. But the office method was very common.

As rudimentary as that method seems now, it’s important today to view the practice in context. Those were the days when architects routinely worked at drafting tables with parallel bars. SketchUp software didn’t exist. If you screwed up, you had to erase and redraw, not hit undo. Drafting itself was an art, and line quality was critiqued. Those loved-hated days could spawn another article, but the point is that having to construct a perspective manually was well within the realm of architectural drafting.

That is, until something better came along.

Enter perspective charts. Though they may have existed concurrently with the office method, perspective charts were a later iteration of perspective setup, at least in my world. I’m not sure that they ever caught on, but I found them a welcome improvement over the office method. These charts, meant to simplify perspective drawing, still required an element of drafting.  As shown in the image, the charts typically consisted of a top and bottom gridded plane, divided into a known increment of measure.

The charts provided a convenient base to draw over and produce reasonably accurate perspectives. To correctly use them required drawing the building’s plan on the top plane and projecting down to the corresponding point. Drawing on the ground plane was technically incorrect, but it was more intuitive and assured that even a rough sketch would have lines that went to the correct vanishing point. 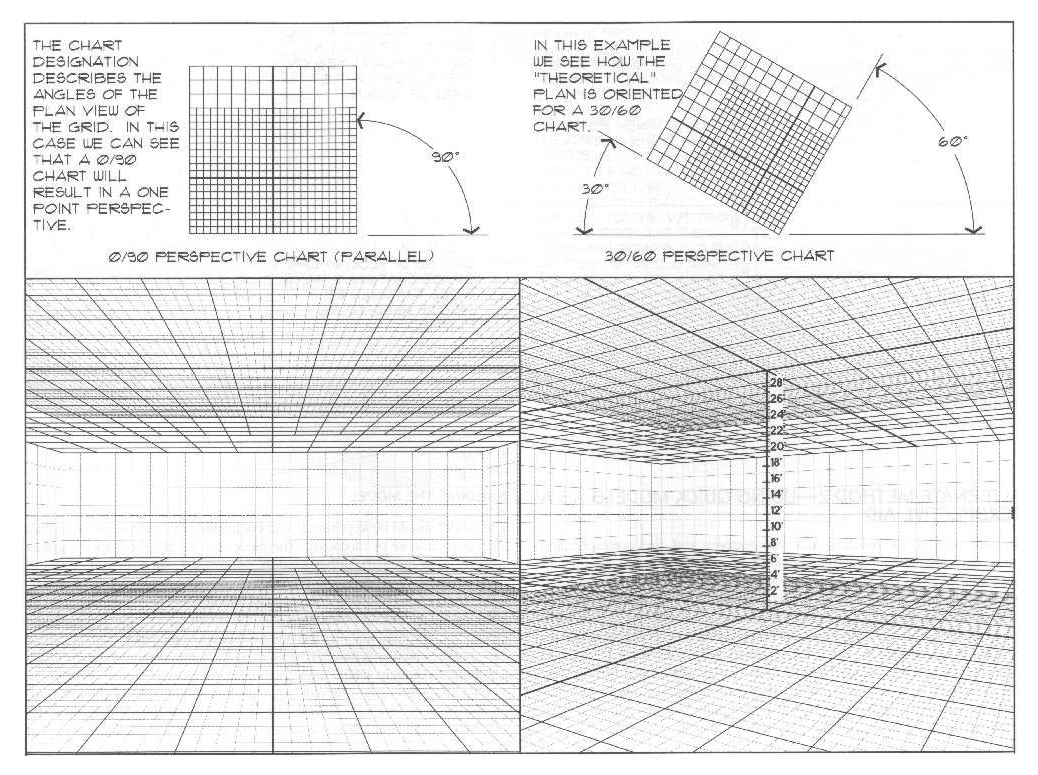 In this example we see how the "theoretical" plan is oriented for a 30/60 chart.

Architects have always sketched, but perspective charts offered a degree of freedom to just start sketching 3D ideas without having to fuss with formally constructing views — a cheat sheet of sorts. I think it made architects more willing to use perspective as a design tool and not just for a finished product to show at the end of the design process.

But like the office method, the lone viewpoint still had to be selected at the beginning, and the perspective was essentially a custom, onetime effort. To change a view angle meant starting over. In that sense, it was no better than the office method. But it was still a welcome improvement.

The evolution to computer 3D modeling was the big game-changer. Software choices grew, and it’s no wonder that 3D software has become a necessity in an architect’s toolbox. Depending on whether you are young in your career or a fossil like me, your software titles of choice will vary. I began with some proprietary software at a large firm, followed by AutoCad 3D, along with FormZ, and finally SketchUp or Rhino.  It doesn’t end there, and it is wise to keep learning.

I do both computer and hand renderings in my work. But even with hand perspectives, I use SketchUp as the first step. If I have to rough out a base anyway, I might as well take advantage of the accuracy and ability to choose views using the computer. Even so, there are occasions where a deeper knowledge of perspective construction comes in handy, such as adding entourage or details to a building that were not fully massed out.

So, while Sketchup and other 3D programs are tremendous, they may have led to an unintended void in the ability of architects to understand the fundamentals of perspective to some degree.  This occurs particularly with travel sketches. Many architects love to draw but may struggle with how to draw perspectives on site without the aid of a computer.

For example, how do you draw a street scene and make sure that all the building heights, doors, windows, cars, trees, and people are scaled correctly? Or multiple vanishing points? These are not instances that require drawing ability, but rather just a basic understanding of perspective.

Drawing perspectives by hand is simple and easily taught, but from conversations with younger architects, it seems the results are mixed as to whether they were adequately taught such skills in school. 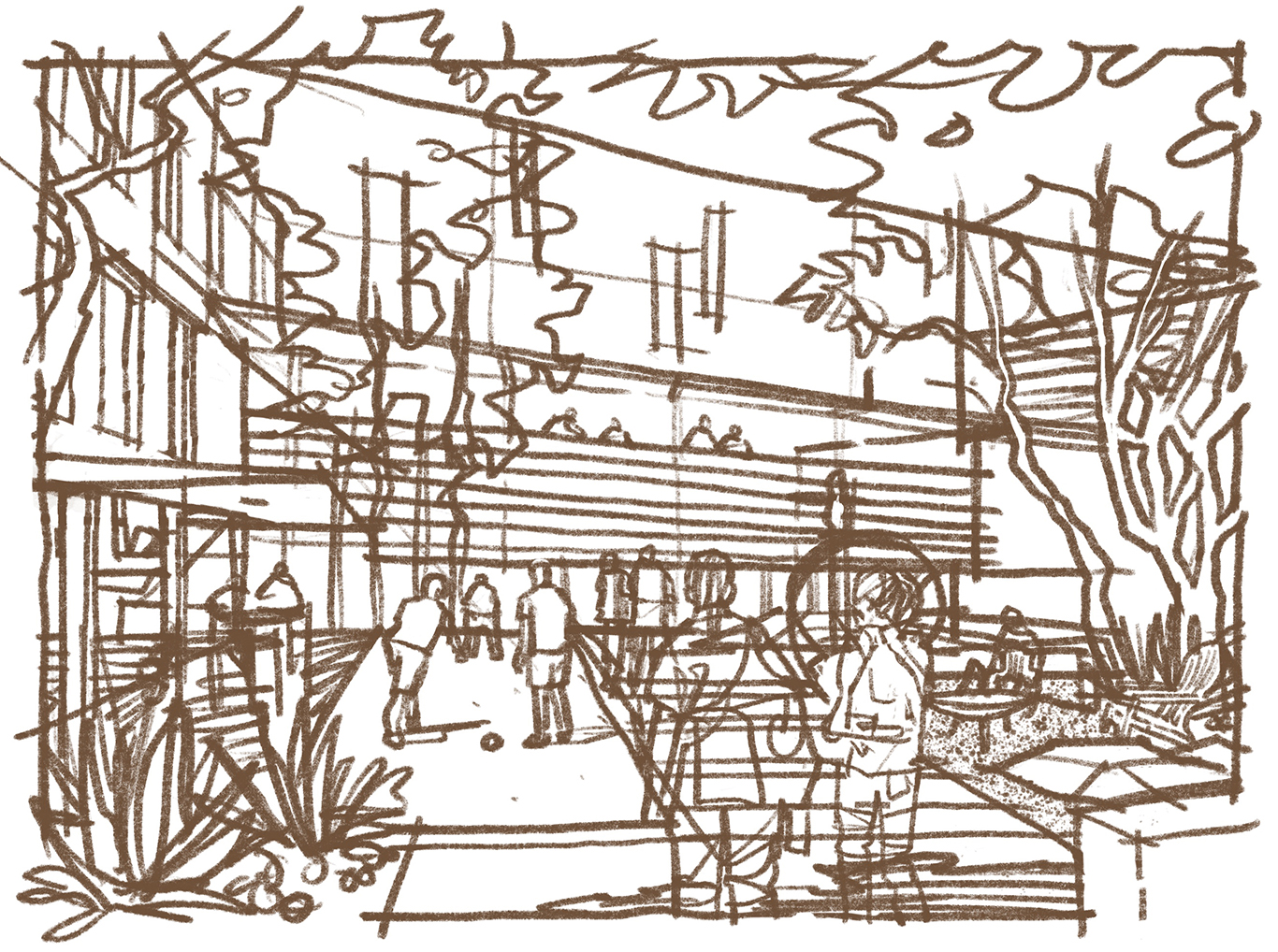 The whole notion of needing to learn perspective is based on decades, if not centuries, of conventional thinking. But we live in the digital age, and it’s fair to wonder whether learning to draw a perspective from scratch is even necessary. That likely is sacrilege to many people, and I would have fully agreed in past years. Now my opinion is more nuanced, or in transition.  I do believe that a foundation in perspective can inform an architect with regard to scale, proportions, rhythm, and even drawing quality, but I am open to  embracing new technologies, software, and apps that make such learning easier and more compelling.

Anecdotal evidence suggests that younger architects would like to improve their drawing skills, including perspective. To engage and encourage this new generation to do so means capitalizing on the digital language that they’re comfortable with. We want architects to draw, and if it takes an iPad and colorful icons to entice them, I’m all for it. 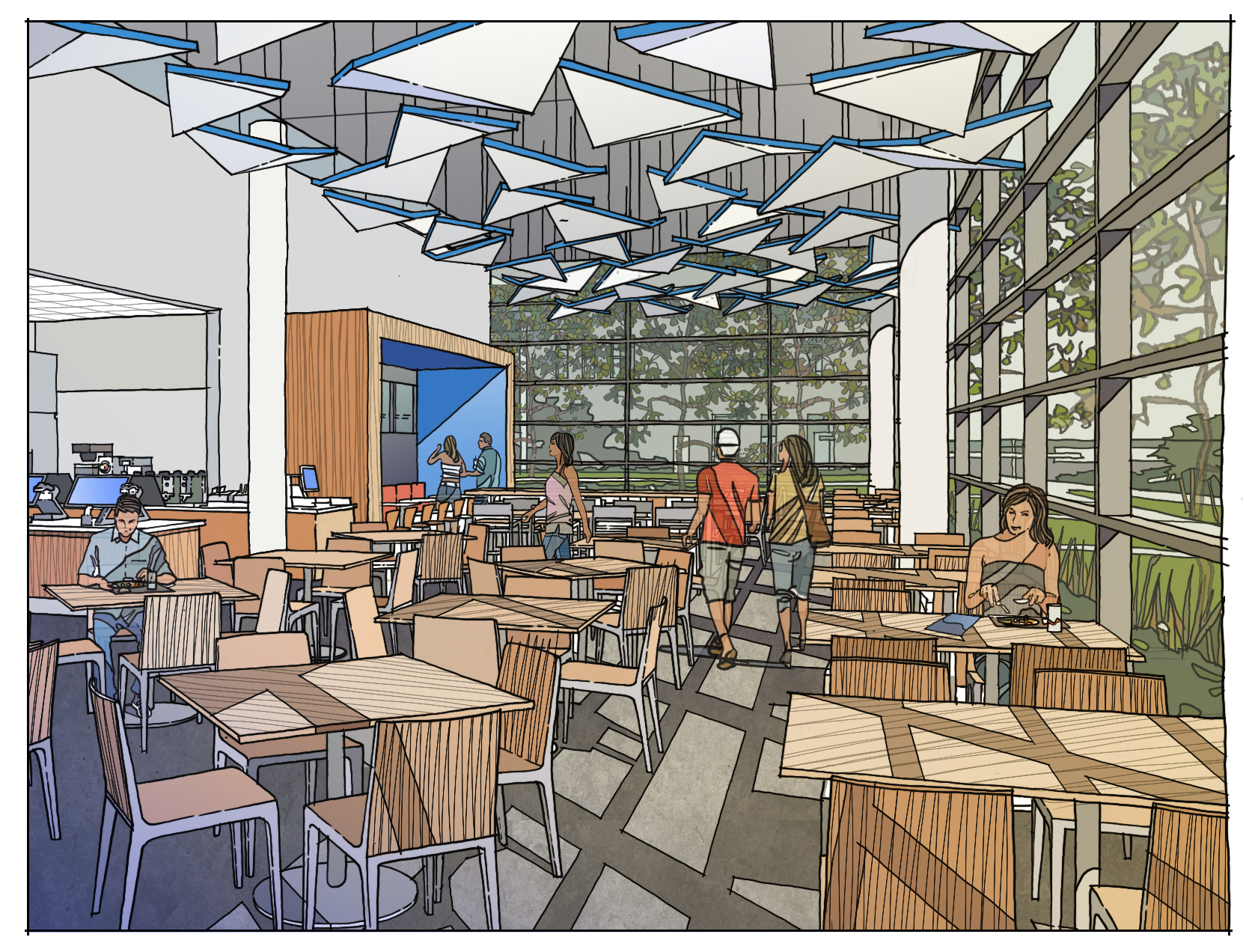 I would distinguish learning perspective from general sketching skills, however. The two are complementary of course, and we often associate sketching with perspectives. But sketching can include 2D, such as plans, rough details, and other scenarios that require a quick graphic depiction of ideas. Having the skills and confidence to pick up a pen and draw without a computer is still hugely relevant and underutilized.

Knowing how to draw a perspective entirely by hand is very useful, so I don’t want to discourage anyone from learning. It’s just that in today’s world, it may not be as relevant, aside from sketchbooks and such.

Regarding sketchbooks, it’s easy to take a digital photo and trace it on an iPad or other electronic tablet, either on-site or in an office. Sure, that goes squarely against tradition, and purists might argue the merits of observing and drawing without the benefit of tracing. True enough. It’s sort of like taking a test when you’ve already been given the answers.

But can you not also observe and study buildings via photos? Of course! You can still learn about form, texture, color, and light/shadows from photos. So couldn’t there be similar benefits to drawing and learning about architecture, even if tracing?  And even with tracing, you should still learn and practice drawing skills, such as composition, negative space, and line quality. There are even digital sketchbook apps that let you draw and turn pages, just like a paper sketchbook.

Tablet apps such as Morpholio Trace are fun and practical. In particular, its AR Perspective Finder is an addictive feature that lets the user pan around a live camera view and apply a perspective grid overlay to it. The grid can be set to different measurement increments, making overlay sketches reasonably accurate both dimensionally and in correct perspective. In some ways, it’s like a far more sophisticated perspective chart, but more fun. It’s a useful tool that just happens to teach the user about perspective.

My own work is essentially 100% digital these days, whether via software or the iPad Pro. That includes freehand sketches. I keep a roll of trace paper handy at all times, but I typically sketch on the iPad. My preference for sketches is the Procreate app, a general use sketching and painting app that feels intuitive with plenty of tool options. 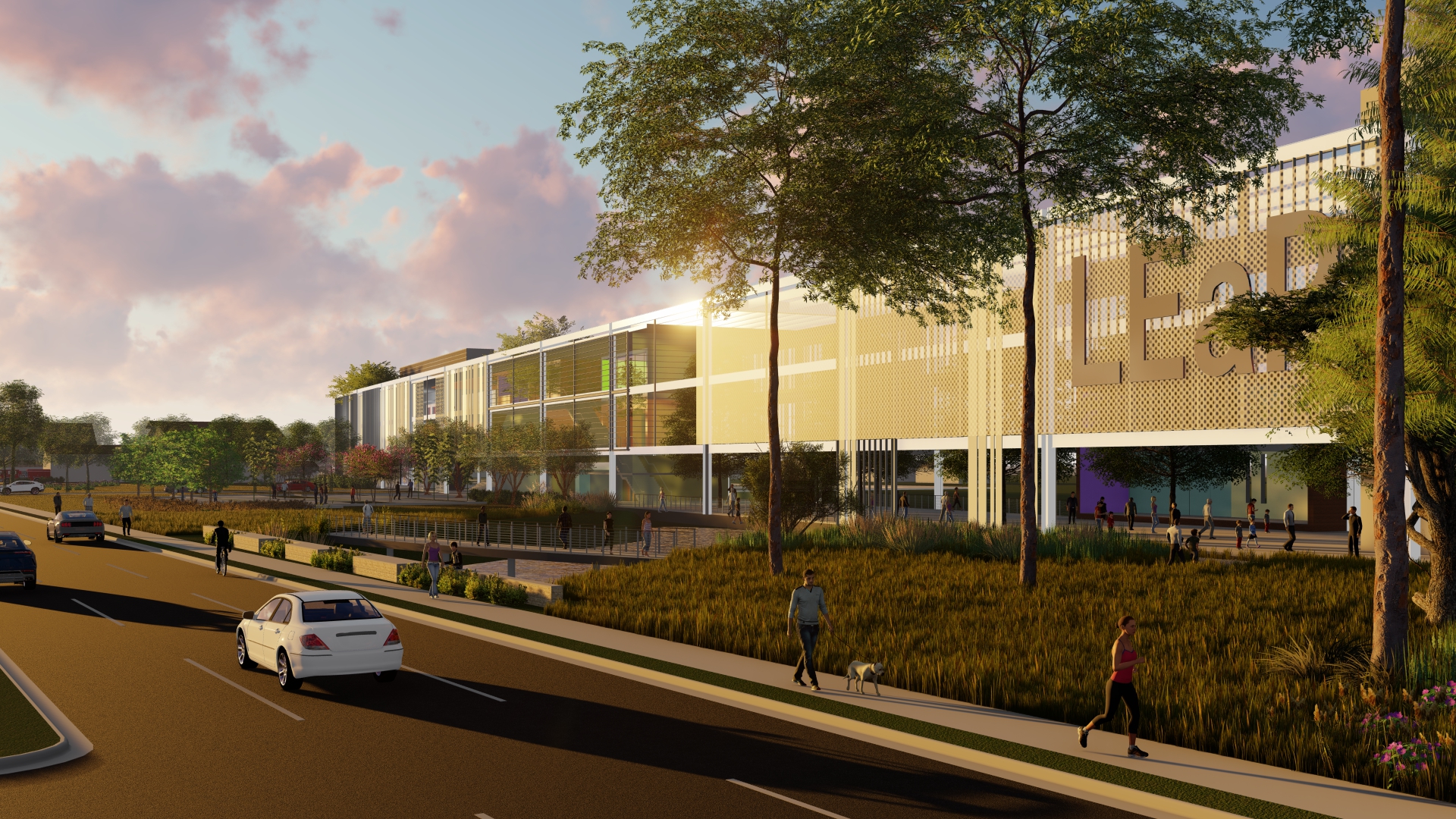 Ultimately, I favor at least some formal training in perspective as part of architectural education. But when it comes to drawing perspectives, it’s time to bend to the reality that most perspectives will be drawn, in whole or in part, digitally. People gravitate to the path of least resistance. Given that digital tools can figure out the perspective for you, it seems inevitable that architects will take advantage of that.

John Yancey, AIA is an architect at Gensler.