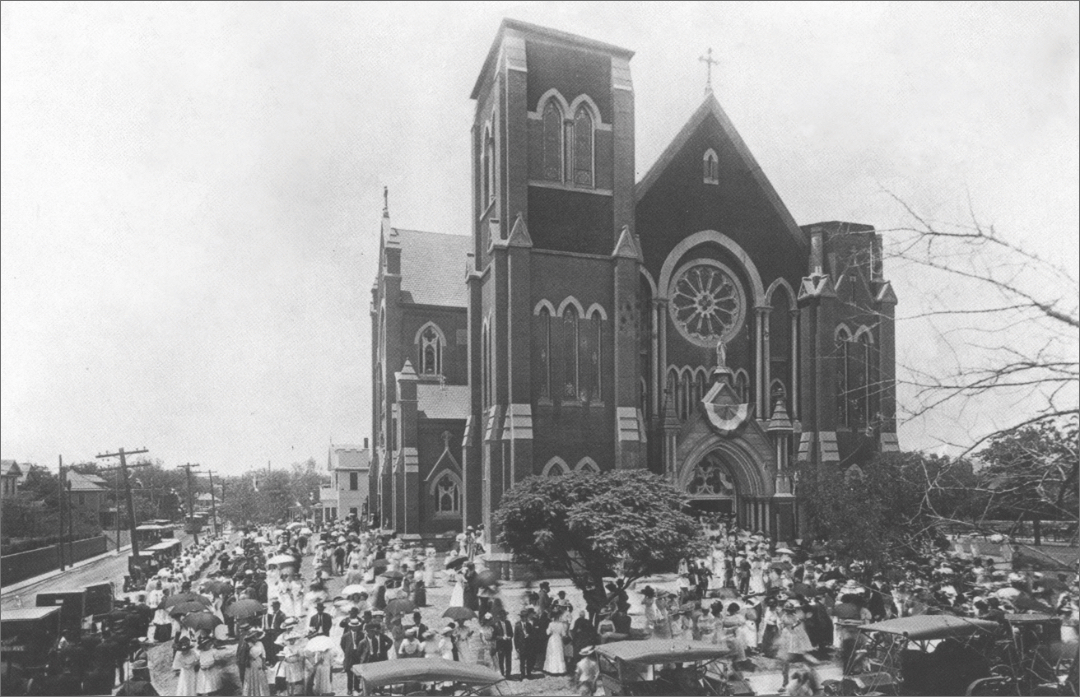 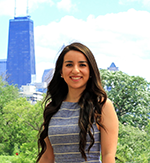 It’s said that to understand a culture, you must first understand its religious beliefs. From the earliest civilizations, which left behind evidence of spiritual principles, religion has served as one of the ties that binds a community.

Today, more than 83 percent of the world’s population hold religious beliefs of some sort, a Pew Research Center study shows.

Pioneer sociologist Émile Durkheim defined religion as “a unified system of beliefs and practices relative to sacred things, beliefs, and practices which unite into one single moral community, called a church, all those who adhere to them.”

While religion is highly personal, it also creates community among those with similar views, which in turn forms the foundations for social institutions. Durkheim went so far as to call religion the clef de voute, the keystone, of all social life. In other words, all the rituals and ceremonies that come with the adoption of a religion work together to create unity among individuals who adhere to the same beliefs.

These very ideas have served as an impetus for the development of neighborhoods throughout the United States. As groups of people settled into new territories across the country, entire neighborhoods formed around the need to practice a unified faith.

Today, Dallas, as a Bible Belt city, is heavily Christian. The Religious Landscape Study, produced by Pew Research Center, outlines the composition of religion in the Dallas metropolitan area. The groups are split into Christian (78 percent), non- Christian faiths (4 percent), and unaffiliated (18 percent). The percentage of Christians in the Dallas metropolitan area is on par with that for Texas (77 percent) and the entire South (76 percent). 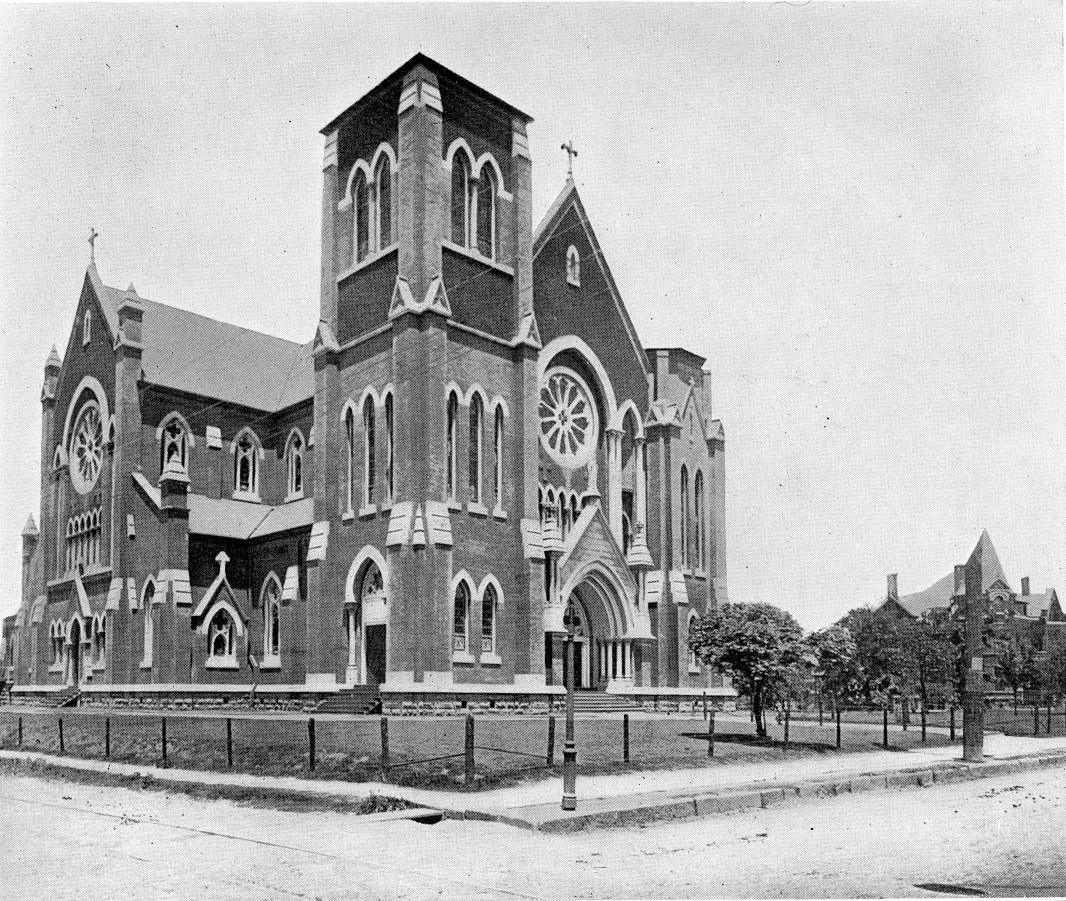 The data is further broken down into the three primary umbrellas: Christian, Jewish, and Muslim. For Christians, evangelical Protestants rank largest at 38 percent, followed by Catholics at 15 percent, mainline Protestants at 14 percent, members of historically black Protestant churches at 7 percent, and “other” ranking at less than 1 percent to 1 percent. Among the non-Christian faiths, Jews make up 1 percent, as do Muslims. Historically, these groups formed strong ties in pockets of Dallas, but the arrival of the automobile and highways, population growth, housing shortages, and opportunities in the suburbs led to the dilution of faith-based communities.

The first religious beliefs in Texas belonged to those of the Native American tribes that lived in the region; among those in North Texas were the Caddo and Tonkawa tribes. In these early religious practices, we already see the spiritual connected to a built space. In the case of the Caddo tribes, large earthen mounds were built as the center for their religious and ceremonial events.

The arrival of European religions looks quite different across the geography of Texas. Spanish explorers brought their Catholic faith with them as they began settling the land, mostly in the southern half of the state and as far west as El Paso. They built Catholic missions in East Texas in an attempt to halt French explorers’ movement across the territory.

Meanwhile, North Texas was still mostly inhabited by Native Americans. After Texas gained its independence from Mexico in 1836, settlers made their way farther north. In 1841, John Neely Bryan settled on the east bank of the Trinity River to establish a trading post that would aim to serve both settlers and Native Americans. The next decade saw the formation of Dallas County, with Dallas elected the county seat. The nascent city eventually received its town charter in 1856.

At this time, circuit-riding priests from Nacogdoches visited North Texas Catholics. Mass was held in homes, with the first in Dallas at the residence of Maxime Guillot in 1859. The following year, a missionary outpost was established in St. Paul in Collin County.

In 1872, Dallas established its own parish, Sacred Heart, and erected its first church in 1873 at Bryan and Harwood streets. Once the church was built, Catholics quickly began forming a community around it. The city’s first Catholic school, Ursuline Academy, came next, followed by the first parochial school, Sacred Heart, in 1875.

The growth of the railroads saw an influx of settlers and the establishment of more parishes in surrounding areas as well as a second parish in Dallas, St. Patrick’s, built south of downtown on South Harwood. In 1890, Pope Leo XIII created
the Diocese of Dallas, which stretched across 108,000 square miles of the state. Sacred Heart was named the temporary cathedral for the new diocese. Sacred Heart Cathedral, designed by architect Nicholas Clayton, opened in 1902 after the arrival of Bishop Edward Joseph Dunne. Six decades later, the cathedral would experience low attendance due to people moving away from the downtown area. At the same time, the Lady of Guadalupe parish in Little Mexico experienced great growth. The decision was made to merge the two parishes, and the cathedral would be renamed the Cathedral Shrine of the Virgin of Guadalupe, as it is known today. 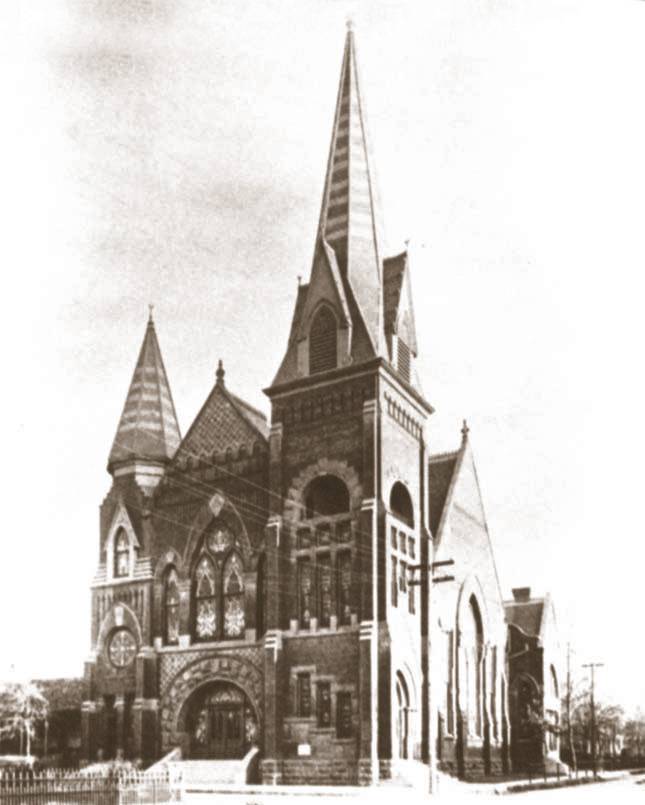 The original sanctuary of First Baptist Church of Dallas was completed in 1890. / Image courtesy of Baylor Scott & White Health

Protestants first immigrated to Texas in the early 1800s. Growth was slow at first because Mexico-governed Texas required all settlers to accept Catholicism as their religion. Once Texas gained its independence in 1836 and the requirement was lifted, Baptists, Methodists, and Presbyterians spread across the new Republic of Texas. In Dallas, Baptists organized three times before mounting a successful attempt. The first two churches did not last, and the third moved out of the city and changed its name to Pleasant View Baptist Church. First Baptist Church of Dallas was established in 1868 by 11 members who met at the Masonic Hall on Lamar Street until purchasing their own building in 1872 on Akard Street downtown. The historic sanctuary was completed in 1890.

The Jewish community may be small in Dallas, but the group has a deep history in the city. Beginning in the 1870s, Jews lived in three parts of the city: Deep Elm (now known as Deep Ellum), Goose Valley (located in present-day Uptown) and the Cedars in South Dallas. Jewish business owners in Deep Elm often lived near or behind their shops. The closest synagogue was Shaareth Israel, located at what is now 2114 Jackson St. East European Jews moved into Goose Valley for the low housing prices available there, with many residing in small homes by the railroad. Jews in this area attended Tiferet Israel, established in 1890, where the first services were held in a private home. The congregation would move into its first building three years later on Highland Street, now Akard Street. While Goose Valley was home to a thriving network of Jews, most aspired to live in South Dallas — and many made the move after gaining financial stability. 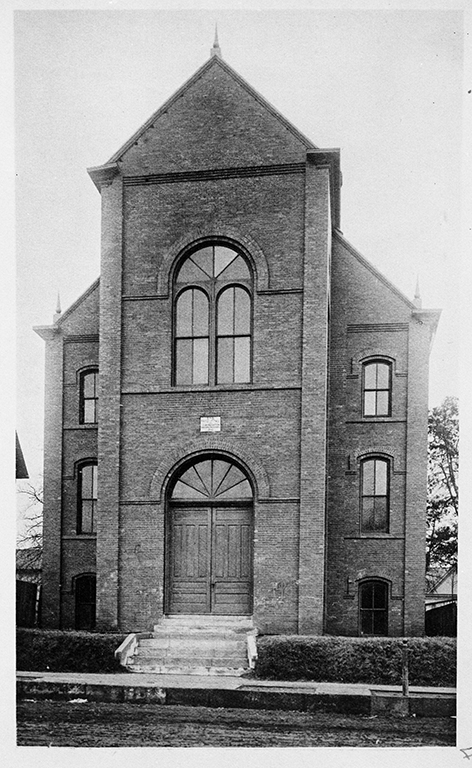 However, the first Jewish congregation in the Dallas area was Temple Emanu-El in 1875. Its first congregation was built at Commerce Street and Church, now Field Street. Upon outgrowing the building, the congregation built a second one in 1899 at the crossing of St. Louis and Ervay streets, following the movement of Jews into South Dallas. Only one block away, near City Park, the Jewish community thrived through the 1930s, with Shaareth Israel, the Jewish Community Center, and the Columbian Club all located in the neighborhood.

By 1916, the residential population of downtown began to dwindle as people moved to other parts of the city. Temple Emanu-El also moved, this time to South Boulevard and Harwood Street. The relocation of the temple spurred more Jews to make their homes in the nearby neighborhood. But after World War II, Jews left the community they had built, this time for northern suburbs. Since then, the Jewish community has been anchored in North Dallas.

After their initial movement into North Texas, members of these religious groups continued to build community around their places of worship. Catholics added schools and hospitals as more parishes were created to serve the growing population. Today, there are 69 parishes in the Diocese of Dallas. Even with new churches popping up in Dallas suburbs, the Cathedral Guadalupe in downtown Dallas still holds weekly Mass. In 2005, a bell tower and steeples from the original architectural plans were added to the church, and today the cathedral is undergoing extensive renovation.

In 2013, First Baptist Church of Dallas opened the doors to its new 500,000-square-foot campus, designed by the Beck Group. Although the construction led to the demise of several nearby buildings, the old sanctuary remained intact and is still used today.

As Jews left the center city for northern suburbs, Temple Emanu-El would relocate once more. In 1957, the Howard Meyer-designed temple opened on Hillcrest Road in North Dallas.

The original footprint of some of these religious groups remains in parts of the city, but the surroundings have undergone great change. These days, believers might not live close to their places of worship, but their underlying commitment to community remains strong. Religious groups still value the importance of creating community, with many offering classes and small group meetings that cater to various age groups and interests throughout the week. 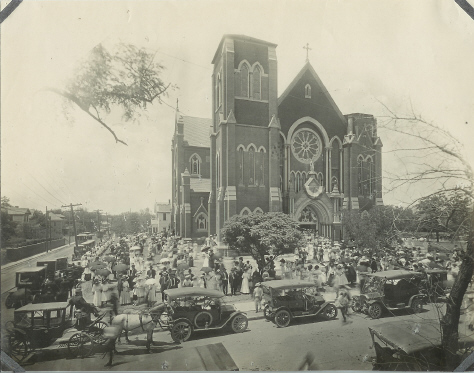 It was a scorching 112 degrees on July 12, 1911 at the Cathedral Shrine of the Virgin of Guadalupe when Bishop Lynch was consecrated and installed as ordinary of the Diocese of Dallas, but the heat did not diminish the crowd or its enthusiasm. / Image courtesy of Archives, Diocese of Dallas, Dallas, Texas

By fostering assimilation, these communities were necessary to build the fabric of the city. Oftentimes, social networks extended only to those with shared religious beliefs. It then became essential to live, shop, and work in the same area. In this way, the religious architecture of the past was more than just a place to visit once a week — it was the nucleus that held its communities together.

Lily Corral is a research assistant at the David Dillon Center for Texas Architecture at the University of Texas at Arlington, where she is pursuing a graduate architecture degree.