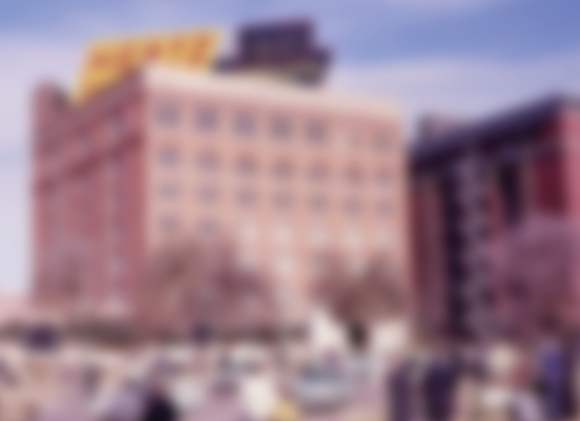 Character, Stripping, and the Evolution of Place 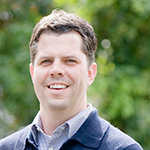 Character, Stripping, and the Evolution of Place

Character is an imprecise and subjective concept that cannot be easily quantified. It is nebulous, messy, and complex. Said a certain way, the word can be a euphemism for “ugly.” (e.g. “That house has a lot of [pause, clear throat] character.”) Cracks in the plaster of a 1920s house, may cheekily be chalked up as “character.” A worn leather bag, discolored by use—faded, broken-in, and rich with age—develops a patina that gives a sense of the object’s past. Wrinkles on an octogenarian’s face tell the story of time and experience.

So, what does “character” refer to when it comes to describing architecture and placemaking in Dallas? Does the purest expression of a particular design aesthetic equal character? Ornamentation on a building—does that, at times, express character?

Many features in aggregate combine and contribute to a building’s or a place’s sense of character. For a district that imbeds itself into our memory, that expresses the soul of a place, there is some “otherness” to it. There is some “it” quality that goes beyond the three-dimensional physical space and extends to how we inhabit that space. This adds to the ambiguity of how to precisely define character. Is it a thing or a feeling?

Consider this: The advent of air conditioning transformed home construction during the latter half of the 20th century by effectively eliminating the environmental need for the front porch. This one change profoundly altered social interaction and sense of community. Highway construction then syphoned life out of the inner city. Ribbons of concrete created stark divides in neighborhoods that once were cohesive. Accommodating the car by scraping blocks of urban fabric to create fields of asphalt profoundly changes the sense of scale and the concentration of activity in an area.

But the built environment is not a static thing. It is a reflection-in-motion of our society’s economic, social, and artistic values. As a consequence, the character of a place continues to evolve and devolve. So, what does the view of our own backyard tell us?

Some might say that Dallas is afraid of its own past, or at least it doesn’t know what to do with it, or how to effectively honor it. Dallas came of age in the last part of the 20th century and is consequently rooted in a post-industrial, auto-oriented typology. However, to condense the entirety of our city down to this one point of view is an overgeneralization, and to say that the result is a city that is void of character is sorely missing the point.

Dallas, and its urban core in particular, is in fact a patchwork of some 175-plus years of building, demolishing, rebuilding, and amending the world around us. In some parts of the community, this evolution has resulted in places that developed a texture and richness through countless incremental changes over the decades—a patina of sorts. In others, there is a uniformity of style and context that can transport you back in time, even if it is only to the 1980s. In other instances, we have recognized that the transgressions of perhaps well-intentioned, but poorly executed building modifications have lessened the quality of our visible heritage.

Deep Ellum is characterized as an eclectic mix of old and new. It stands, for now, as a prime example of letting history arrive and express itself with each new day and each new tweak to its fabric. This casual attitude toward the buildings, changing incrementally over time, has resulted in a place with a comfortable and relaxed vibe. Hollowing out buildings to create communal gathering places and slicing through blocks to provide safe and comfortable passage are interventions aimed at elevating the experience of the pedestrian. As a result, Deep Ellum is becoming more humane and “stickier.”

Similarly, recent changes to The Crescent have softened its edges and injected life at the base of the building through landscape and through alteration of how the ground floor space is occupied. Its changes allow activity to spill out under the trees, opening up what was once an auto-oriented island. These interventions have been done while arguably maintaining the integrity of Philip Johnson’s Postmodern take on historic French architectural paradigms.

These examples show that modification in and of itself doesn’t necessarily detract from or diminish character. In some cases, it improves and enhances it. If we were to strip either of these examples back to its original form, we would take away some of the interest and human scale that has developed over time. There is an argument here to allow for the gentle evolution of places. 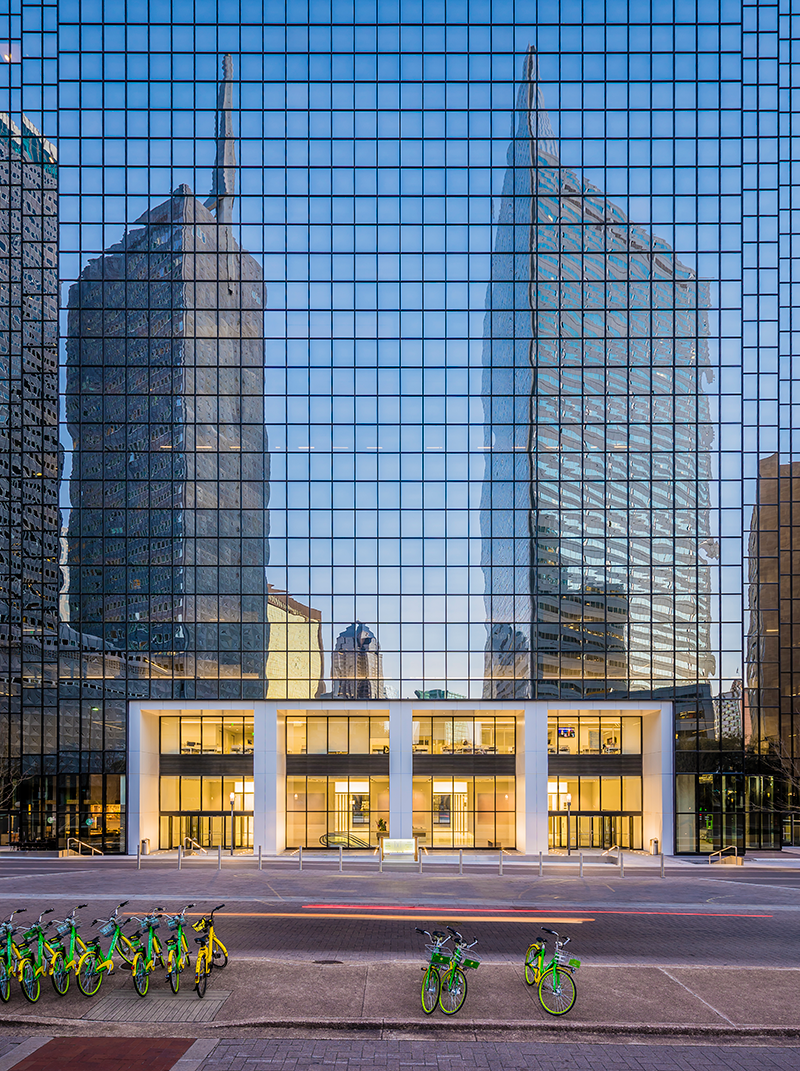 Above and below: New York-based James Carpenter Design Associates, in conjunction with Gensler as architect of record, recently designed renovations to Thanksgiving Tower for owner Woods Capital. The new façade includes a more welcoming entrance lobby and a coffee shop, among other amenities. Credit: Michael Cagle 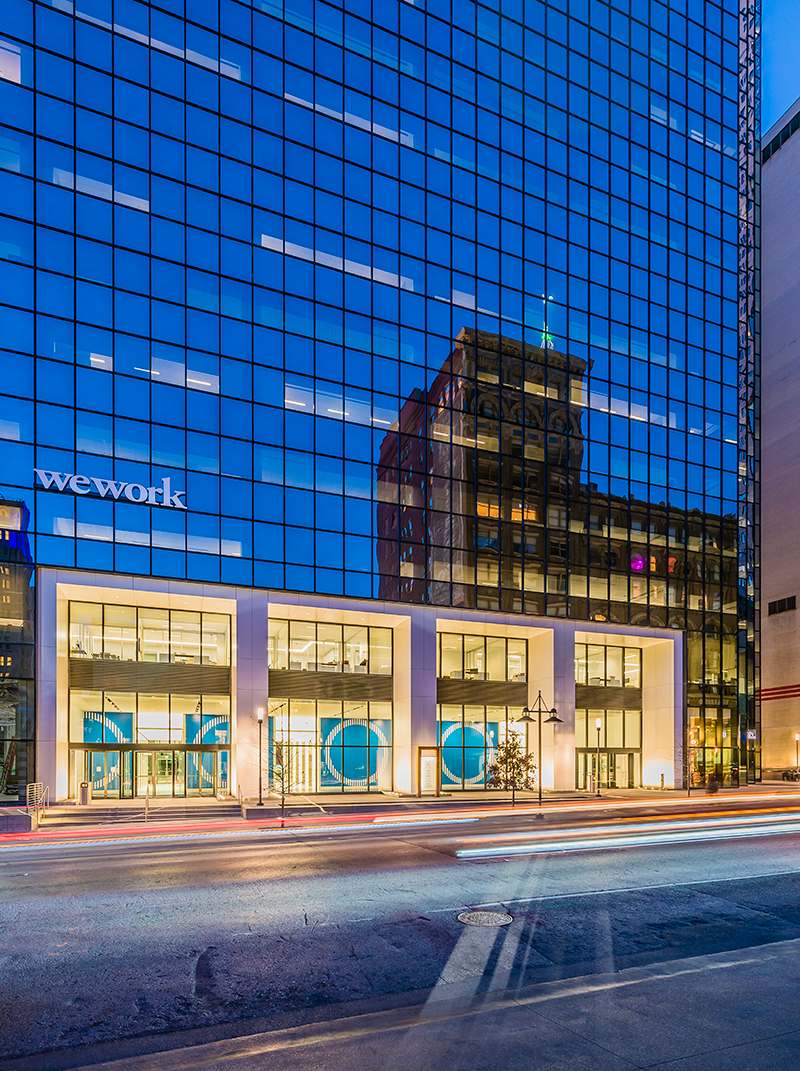 If buildings are testimonies of the time and place that built them, then 1980s Dallas had a lot to say. A building boom driven by free-flowing capital—not necessarily by a high demand for real estate—kept us cranking out buildings until the whole house of cards had collapsed by the end of the decade. Despite the initial glut of hollow buildings, this prolific period of development is a defining period for our downtown.

While the urbanism of the ’80s was lacking, to say the least, we now look back upon some of these places with a level of nostalgia. The opulence of unfettered money certainly left an indelible mark on downtown. The materiality found in the original brass, exotic hardwoods, and stone in the lobby of Trammell Crow Center, for instance, was endemic of the time. Ice skating in the lobby of the Plaza of the Americas was a quintessential downtown experience. However, as these spaces aged and materials fell out of fashion, pressure to stay competitive in the marketplace eclipsed any notion to keep these buildings in their original form. While reformatting the street edge around Trammell Crow Center rethinks our past treatment of the public realm, are we losing, at least in part, exemplary prototypes from that era? In the long-run, will the resulting space begin to feel awkward and incongruous with the building that surrounds it? Are we losing some of our “Dallas-ness?” If so, will we restore either back to its original condition someday decades from now? Time will tell.

Take It All Off!

Some of our city’s most iconic architectural landmarks once had their original character shrouded, or at least partially obscured, in an effort to “modernize” them. Too often, we pasted over “tired” and “outdated” facades to give them a sense of freshness, to make them seem more marketable, more “adapted” to a modern way of life. In some instances, dismantling these masks eventually represented the more favored cultural expression of our community.

The Texas School Book Depository at the time of JFK’s assassination was embellished with mid-century screening on its ground floor and fitted with aluminum windows. It was renovated in the early 1980s back to its original 1901 Southern Rock Island Plow Company appearance. Many would argue that the more coherent detailing of the original design provides a better welcome to our city as it stands watch over Dealey Plaza. The Magnolia Building—home to the our very own Pegasus, the celebrated symbol of our fair city—was once covered along the street level in slick stone that flattened the texture and rhythm of the Beaux-Arts detailing that once again graces Commerce Street. Looking at downtown today, it is hard not to imagine the sense of history that each of these buildings lends to the urban fabric.

Some places are not so lucky. Underneath the beige skin of the Butler Bros. Building, lies an early 20th century architectural behemoth. Attempt after attempt to peel back the skin and expose the building’s original charm and character fell short, even with the offer of city subsidies, federal tax credits, and the yeomen’s efforts of developers. All the king’s horses, it would seem, could not bring much-needed interest and character back to this corner of downtown. If only…

John Brinkerhoff Jackson, a leader in landscape studies, notes that “…Since the beginning of history, humanity has modified and scarred the environment to convey some message, and that for our own peace of mind we should learn to differentiate among those wounds inflicted by greed and destructive fury, those which serve to keep us alive, and those which are inspired by a love of order and beauty, in obedience to some divine law.” His argument is for intelligent discernment of the built environment. After all, living places will continue to change. How we manage that change is the critical question we face. As a city, we must balance chaos with order, old with new, predictable with surprise, and nostalgia with contemporary realities if we are to maintain vibrant places. In pursuing this endeavor, what do we keep on, and what do we strip off?

Are the changes we make improving the character and shared experience of a place or are we simply pruning the history out of our architectural record for short-term gain? We’ll see. The future is in our hands.