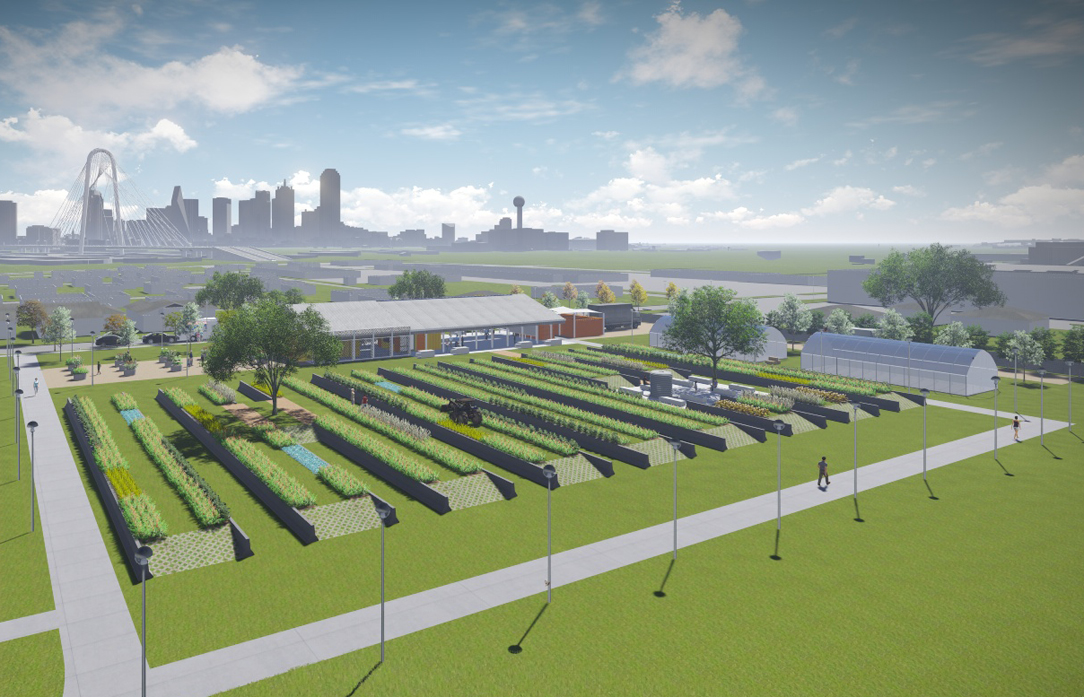 Credit: Renderings by University of Texas at Arlington students
1
2
3

Why can’t a park be green with lush garden beds, and a farm be a place bustling with activity?

As architects have sought to design ever more sustainable and socially conscious buildings, it’s not surprising they have embraced urban agriculture. Americans’ food travels an average of 1,500 miles from farm to fork in a food system that accounts for nearly 15% of the nation’s energy use. The world’s steady shift toward urbanization is only going to make the problem worse. While less than half the world lived in cities in 2008, a United Nations report estimates that figure will be 70% by 2050, with an even more staggering 90% of North Americans living in urban areas. The shrinking number of traditional rural farms will simply not be able to continue to feed all the city-dwellers. The only sustainable option is for cities to grow more of their own food.

While visionary architects take the idea to new heights, imagining high-rise farms in every downtown, the movement has been quietly taking root in backyards and vacant plots around the world. Dallas, with all of its open spaces, seems ripe for the picking.

One project gaining momentum is La Bajada Urban Youth Farm, a joint venture between the University of Texas at Arlington’s School of Architecture and West Dallas Community Centers. The idea takes an overgrown field just a block from Trinity Groves and the Margaret Hunt Hill Bridge and turns it into a 2-acre organic farm, park, and community center to provide not only fresh food, but also jobs and educational opportunities in the low-income neighborhood.

A group of UTA graduate students—led by School of Architecture Dean Don Gatzke, AIA and teacher and landscape architect Kevin Sloan—finished the design for La Bajada in April. The group kept the design efficient and economical. They enclosed secure spaces in a series of recycled shipping containers, shaded by a large, steel-framed roof that also protects the events pavilion. The design includes offices, storage, a work area, bathrooms, greenhouses, and a commercial kitchen, in addition to the events space. The site is open and inviting to the community with places to sit and a children’s play area nestled among the raised garden beds. It will function as both a working farm and a green space for the community.

A New Kind of Park

With La Bajada, Gatzke set out to challenge the traditional notions of what a park and a farm look like. When people think of a park, they usually think of grass and trees. When people think of a farm, they usually think of endless rows of crops, far away from civilization. But why, he asks, can’t a park be green with lush garden beds, and a farm be a place bustling with activity? From the start, La Bajada was intended to be both. “This is an alternative for a neighborhood park,” Gatzke says. “I think it presents a richer way of thinking about landscape and site design.”

Many agree. In fact, food crops are fast becoming a staple of sustainable site design. LEED added local food production as a pilot credit, and the Living Building Challenge mandates it for all but the highest density projects. “Urban agriculture will be one of the keys to success in sustainability,” says Monica Miller of ThyssenKrupp. She is one of two Living Building Challenge ambassadors in Dallas. “As our population continues to grow and our cities continue to develop upon prime farm land, it’s important for our cities to grow their own food so we can continue to feed the world.”

Urban farming was also identified by The Connected City Design Challenge jury as one of six key ideas crucial for developing downtown Dallas and the Trinity River. In its final brief, the jury called for “activating public lands as entrepreneurial urban forests and farms,” and praised the strength of the submissions in accomplishing this goal. Architects and landscape architects increasingly are striving to make landscapes that are not just pretty, but functional. One Connected City juror, Robert Meckfessel, FAIA of DSGN Associates, put it this way: “Given that we have a culture in Dallas of surrounding our buildings with open space, why can’t it be put to productive use?”

In a video summary of the Connected City Challenge, Jury Chair Larry Beasley emphasized the economic advantages of embracing urban agriculture. Not only could bold landscaping transform the Trinity River corridor into a memorable space, but “an amazing related idea is that this landscape might actually pay for itself, and even become profitable, if it is seen as a cash crop initiative—not just a public embellishment,” he says. “Just imagine all those acres that could be in productive use with beautiful, green results.”

The economics of agriculture is also a driving idea behind La Bajada. Gatzke and Sloan note that the farm would employ at-risk teenagers as paid interns, providing jobs and leadership training as well as giving them access to healthy foods they could take home to their families. Schools would be able to use the farm as an educational resource for agriculture and science. Produce sales could also support the farm into the future. “It has the potential to be self-sustaining financially, and not just a drag on the bottom line,” Sloan says.

The students have already started cultivating buyers for future harvests—surveying chefs from Trinity Groves (a new mixed-use restaurant designation at the base of the bridge in West Dallas) about what crops they would want to purchase from La Bajada. The studio tailored some of its crop choices to those tastes, adding more herbs, peppers, and mushrooms. They also researched similar urban farms here and in New Orleans, which they were able to use as agricultural resources.

The seed of the idea for La Bajada came to Gatzke two years ago while on vacation in New Orleans. “I was trying to find some kind of community-based project the students could get involved with in Dallas.” While visiting friends and former colleagues from Tulane, he had the chance to see the Grow Dat Urban Youth Farm—an organic farm designed by Tulane architecture students in New Orleans’ City Park. That’s when it “clicked,” Gatzke says. If it could work in New Orleans, he could make it work in Dallas.

He soon found the right place: a large vacant field adjacent to a small community center near Trinity Groves. The owner, West Dallas Community Centers, offered to provide the land for a community farm. Gatzke brought on Sloan and the students to do the design work. Gatzke also took on the fundraising and began politicking, gaining support from West Dallas Chamber of Commerce and from West Dallas Investments, which owns a stake in several Trinity Groves restaurants. The farm also received an endorsement from The Dallas Morning News.

The studio visited New Orleans and Grow Dat become the model for what they would strive to achieve. The programs are nearly identical, the primary difference being that Grow Dat is located on an abandoned golf course in a large city park, whereas La Bajada is in the middle of a residential neighborhood. Because of that, Gatzke and Sloan worked diligently with the students to gather community input and support. They held monthly meetings with residents to gain feedback and explain their ideas and intentions. In response, the final design is mindful of the scale of the neighborhood, limiting the height of the buildings so as not to overpower neighboring homes. They also added a baseball field, as requested by the community, and worked around an existing playground and basketball courts.

When the final design was presented in April, residents were generally positive about the design. Some, however, were still wary about growth. They were particularly concerned about parking and the fact that their neighborhood is already overrun by Trinity Groves. Street parking has clogged the narrow streets so much that residents say emergency vehicles can’t always get through. West Dallas Community Centers is in discussions with the City of Dallas about using city improvement funds for additional parking in the neighborhood, but that would likely come well after the farm begins operation. Gatzke noted that, although the design is now final in terms of the academic studio, “this is one step in a larger process,” and “things can change.” 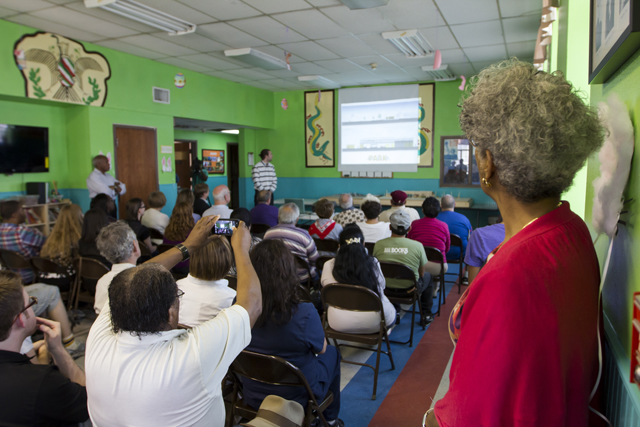 La Bajada residents have seen plans change before, which caused some to take the attitude of “I’ll believe it when I see it.” They said other developers have come through presenting big ideas that never happened. La Bajada Urban Youth Farm, however, is off to a promising start.

The La Bajada team set a preliminary goal of $1.5 million to cover construction and two full years of operation, including student salaries. They hope farm revenues can sustain the program in subsequent years. Gatzke says he has firm commitments for three-quarters of their fundraising goal as of May 1. He also says he has received several offers of help from construction professionals which could help ease building costs. He anticipates a first planting by the summer of 2015.

“Our commitment doesn’t stop,” Gatzke recently told La Bajada residents. In fact, he plans to devote the next year to getting the youth farm off the ground after he steps down as dean of the UTA School of Architecture on August 31. He is taking a sabbatical year to work on La Bajada and a few other projects before returning to the UTA faculty in fall 2015. Some of the students also plan to see the idea through to fruition.

La Bajada will not be the first urban youth farm in the Dallas area. The students also visited the WE Over Me Farm at Paul Quinn College, which provided agriculture consulting to the studio. Paul Quinn converted its old football field into a 2-acre organic farm in 2010. The college sits in the middle of a federally recognized “food desert,” defined as a low-income area lacking grocery stores and healthy food options. WE Over Me sprouted in response. It now produces high-paying work-study jobs to students and healthy produce, which is served on campus and sold within the community or commercially. One of the farm’s biggest customers is Legends Hospitality, which handles food service at the Dallas Cowboys’ AT&T Stadium. The farm also donates no less than10% of its produce to churches and food pantries.

The Stewpot of First Presbyterian Church is also developing a downtown community garden as part of its new ministry campus at 508 Park Ave. Volunteers began growing radishes, spinach, onions, carrots, and potatoes on a temporary donated plot on the site this year. Stewpot clients began receiving fresh, organic produce from the garden in February. The developing Encore Park Community Garden hopes to become an inclusive pace, where rich and poor come together to garden and share in good health.