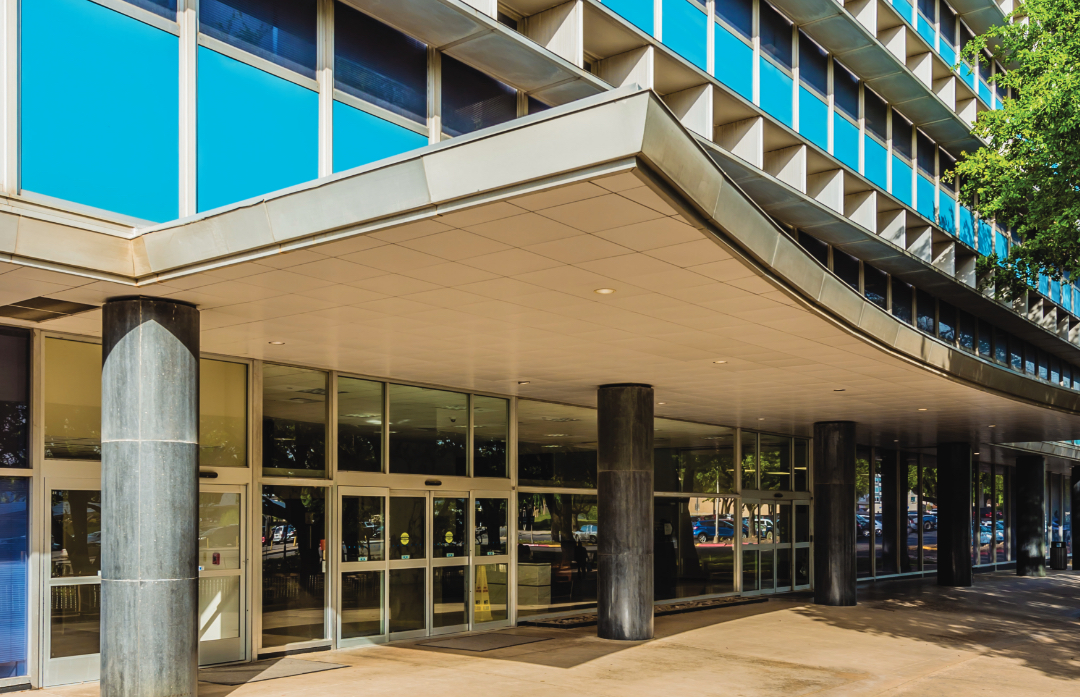 This is a truly wonderful article about a cutting edge architectural business park. My parents worked on the 7th floor of the

About 1 year ago: Matthew A.

Hello fellow Exchange Park Residents,
I really enjoyed your article and would like to share a few wonderful experiences about this magnificent architectural business park. My father had his architectural business on the 7th floor of exchange bank tower and also designed the post office in the exchange bank tower. Being a family business there from 1960-1979 I was able to enjoy its many shops and restaurants. I have great memories and pictures from that period. It was almost a second home with our family coming and going even on weekends. I can still taste the ham sandwiches on the kaiser roll bread that came from the Greek restaurant. I remember the beautiful painted scenes of the Mediterranean Sea on the walls. I also remember the medieval pub. Just two quick questions about that, where were they exactly located and called? I remember them being like in a basement of sorts? Once again, your article Sir stirred up great memories. Thank you for your dedication to our great Dallas architectural history.
Respectfully,
Matt Adams

Architects and engineers at Dallas’ Lane, Gamble & Associates spent three years planning the project. It included office buildings, shops and services, two department stores, a hotel, and residential towers. The press labeled the development a “city-within-a-city” and the “city of tomorrow.” The development was never fully built, but the part that was constructed was ahead of its time and set trends for similar development across the country.

The 14-story Exchange Bank opened in 1956 with a clean-line modern design that featured continuous strips of windows with bright yellow spandrels, since painted a charcoal gray. Projecting sun visors, a new concept, were built into the facade to cut down on the heat load by keeping sun off the windows. The interior was just as cutting edge, with movable wall partitions that could be rearranged overnight to create new office spaces. Innovations included snap-in air outlets and light fixtures as well as floor construction that allowed wiring and outlets to be easily rearranged to meet tenant requirements. According to The Dallas Morning News, Exchange Bank was the first U.S. office building to incorporate such modular flexibility. 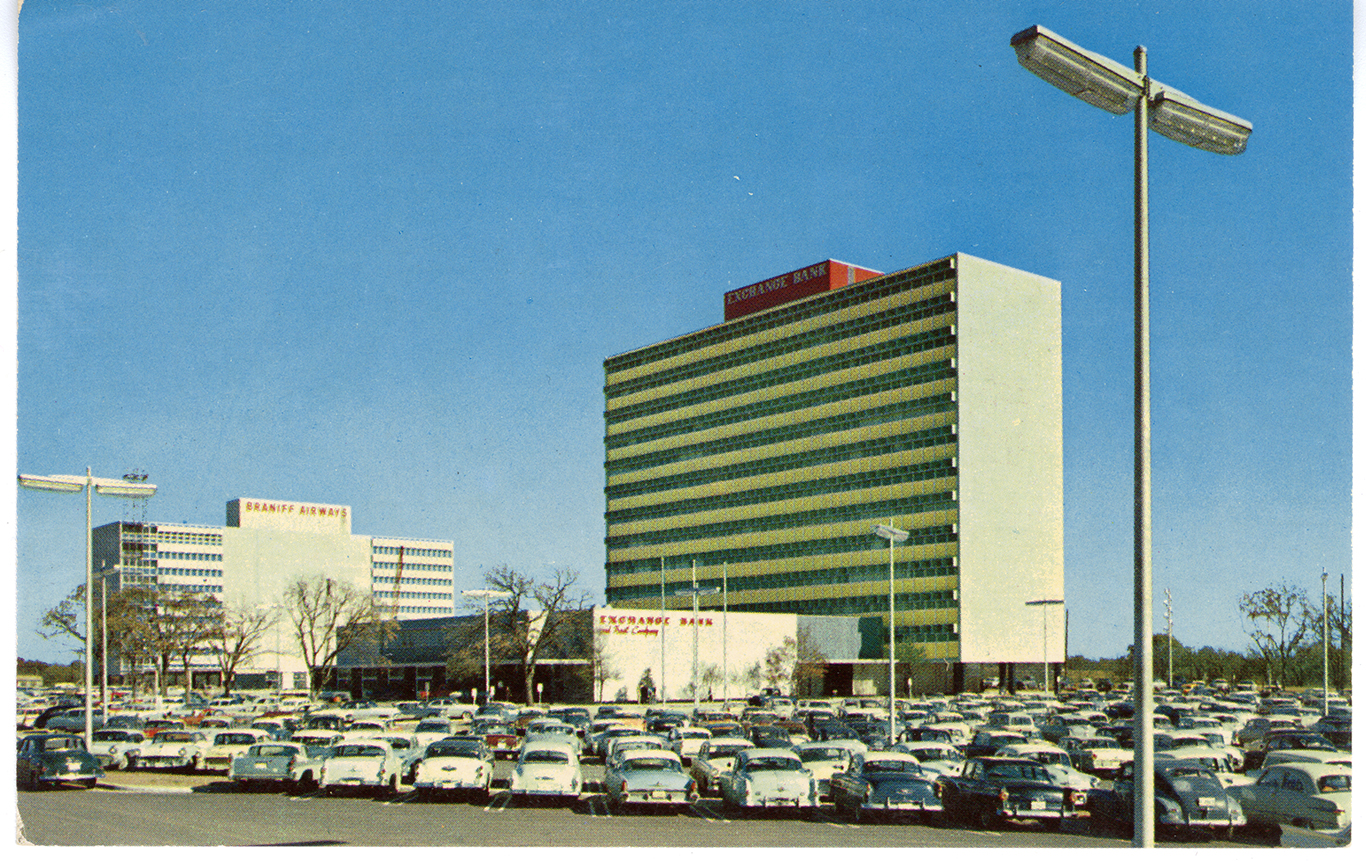 Exchange Bank was the first building constructed in the complex in 1956, followed by the Braniff Airways headquarters in 1958. The Frito-Lay Tower came later in 1966. // Postcard image from the late 1950s courtesy of Braniff Airways Foundation

The Braniff Airways headquarters, the site’s second office tower, opened in 1958. The 10-story building was strikingly similar to Exchange Bank and used the same sun visors on the main façade. But the Braniff building had bright blue spandrels, which still retain their original color, a rear façade with a different shading system and a top floor that featured a landscaped terrace that gave Braniff executives views of nearby Love Field. The interior featured the same flexible wall system. 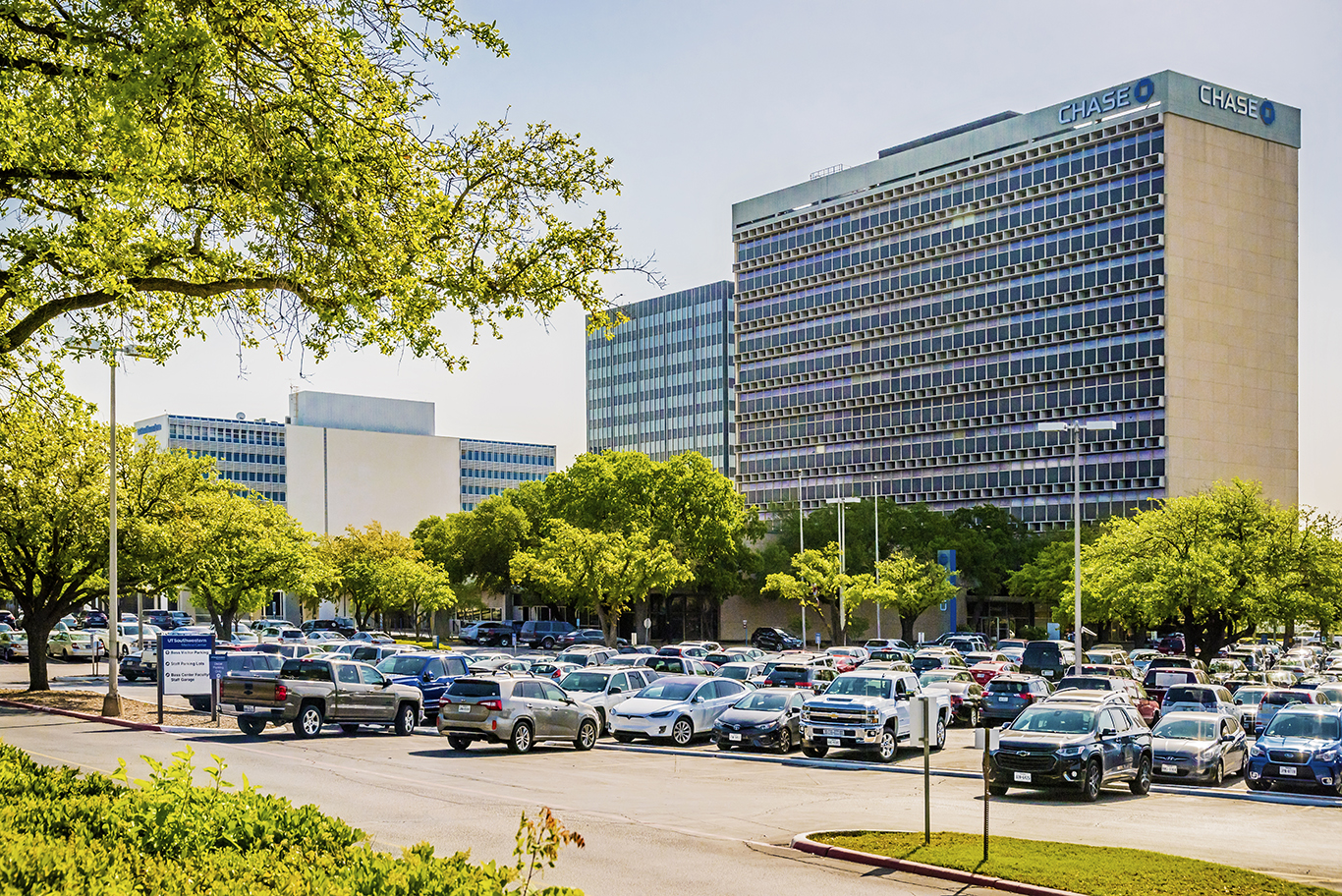 The large office towers at Exchange Park were connected by “weather conditioned streets” of a mix of brick and exposed concrete with designs of varying shades and sizes of exposed aggregate. Originally shops, services, and restaurants opened up to the “street” and now those spaces are used by UT Southwestern Medical Center. / Photo: Michael Cagle

Connecting the two towers were 40-foot-wide “weather-conditioned streets.” The fully enclosed, air-conditioned area contained shops, services, and restaurants. The “street” had a mix of brick and exposed concrete, with designs scattered throughout in patterns of varying shades and sizes of exposed aggregate. Above, a series of large skylights provided natural light for the space, including planters with lush foliage. The concept served as a forerunner to the modern mall. 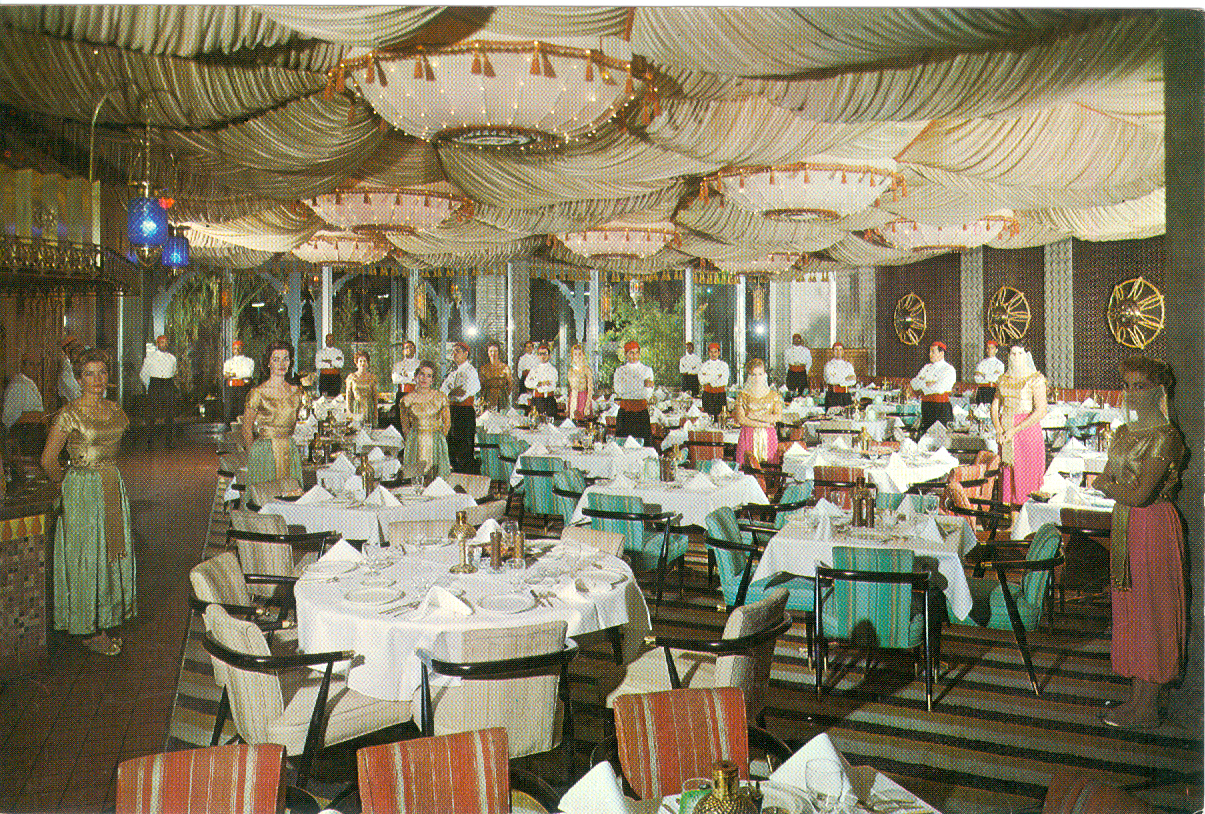 La Tunisia, one of Dallas’ most unique restaurants, opened in 1959 in Exchange Park. Guests entered through a loggia surrounded by an exotic garden of tropical plants and palm trees. / Postcard image courtesy of Dallas Heritage Village

Two establishments made their marks after opening in 1959. At La Tunisia, one of Dallas’ most unique restaurants, guests entered through a loggia surrounded by an exotic garden of tropical plants and palm trees into the main dining room. Hundreds of yards of hand-woven silk hung from the ceiling and adorned the walls to give the effect of being inside a huge tent on the Arabian desert. The Sheik’s Tent lounge and the private Pioneer Room bridged the divide between North Africa and Texas with calfskin and patchwork quilt covered walls with longhorns attached. Marco Engineering, the Los Angeles firm that supervised the building of Disneyland, designed the restaurant space, touted as having the “romantic charm of a North African desert oasis” and as “one of the best examples of interior design in the nation.”

The Mickey Mantle Bowling Center, also opened in 1959, featured 32 lanes, and the baseball great moved his family to Dallas to be near the new center. Over 10,000 people, including Whitey Ford, Yogi Berra, Billy Martin, and Dorothy Malone, came for the opening.

A garage and surface lots provided ample parking. Underneath the complex, a 3,600-foot-long tunnel system allowed trucks to unload and service vehicles to operate without being seen or interfering with traffic movement at ground level. 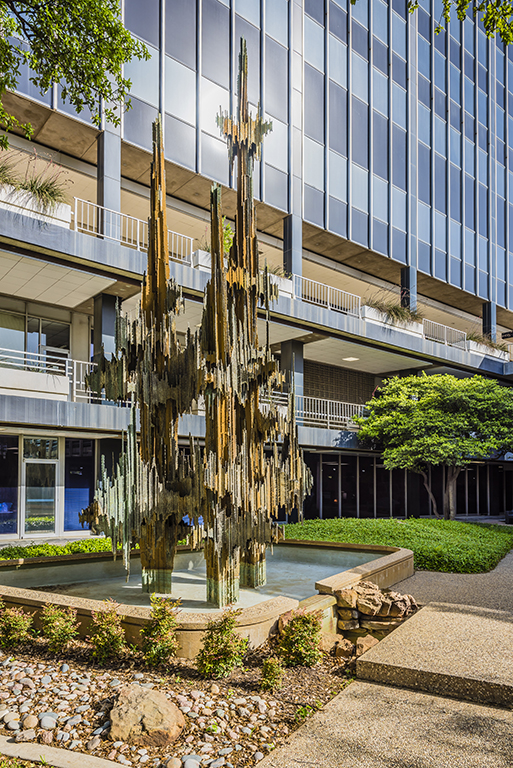 In 1965, sculptor Wilbert “Bill” Verhelst created a 35-foot-tall fountain to be the focal point of the new Frito-Lay building in Exchange Park. The sculpture resembles a huge stalagmite and is made of non-corrosive silicon copper which was hand textured and intended to oxidize to a blue-green color consistent with the forces of nature. // Photo: Michael Cagle

The third and final office tower at Exchange Park opened in 1966 as the corporate home of Frito-Lay. Lane, Gamble & Associates departed from the design of the earlier towers, forgoing sun visors for a clean glass-walled cube of 17 stories with a five-story projection. The building featured a private rooftop club, a medieval pub, and a large cafeteria. It also included an elaborately landscaped garden area with a 5-ton copper water sculpture by Wilbert Verhelst. The tower connected to the pedestrian mall and the parking garage, which was expanded to accommodate the new tenant.

Today, Exchange Park remains close to its original design, with slight updates for modern conveniences. But its use has changed dramatically. Braniff moved its headquarters to DFW International Airport in 1976, and Frito-Lay left for Plano in 1985. Exchange Bank was bought out and became Texas American Bank before it closed. 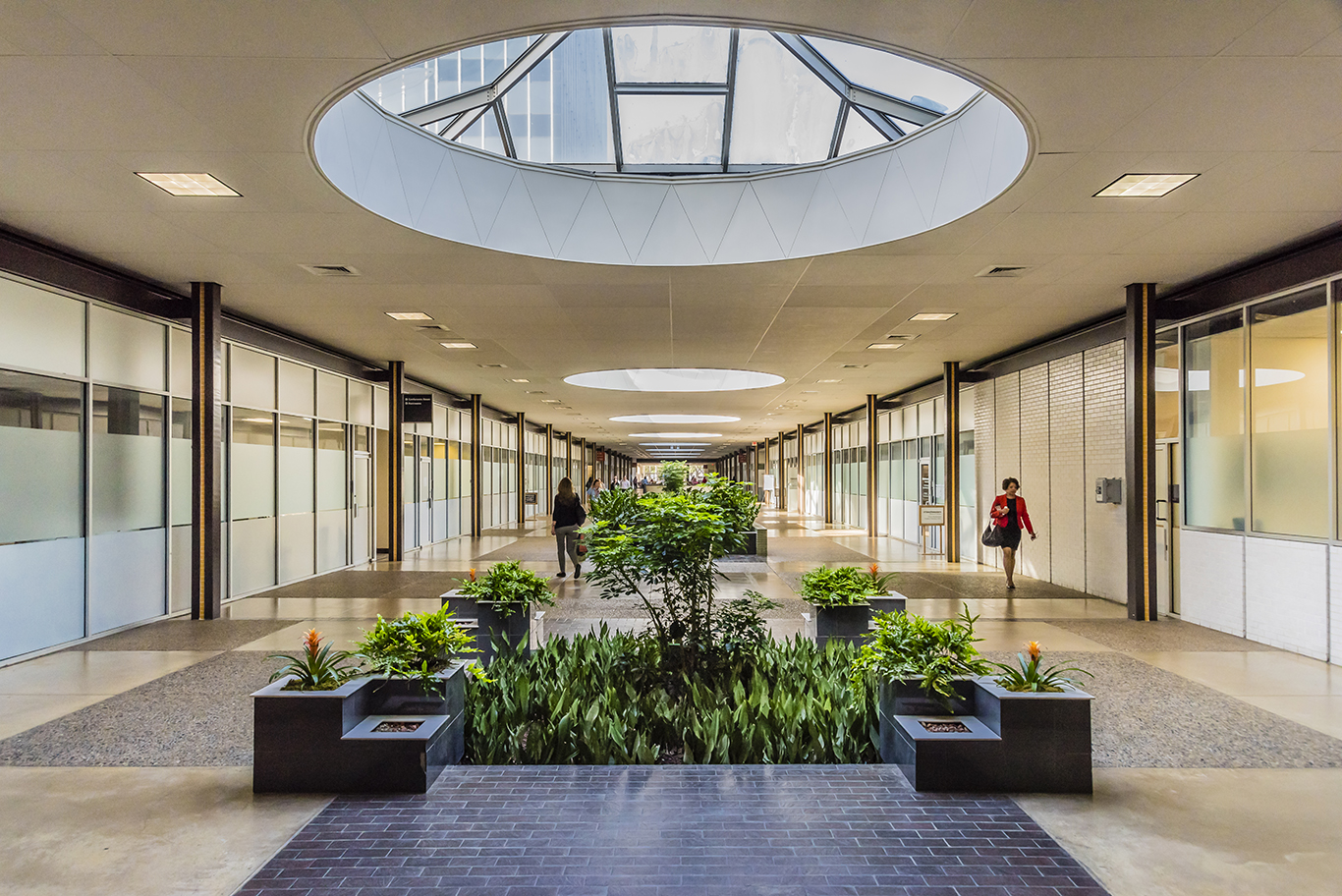 Arthur’s West restaurant replaced La Tunisia in 1972, and it, too, eventually closed. The Mickey Mantle Bowling Center is long gone. Exchange Park changed hands several times, and in 2008 UT Southwestern Medical Center purchased a large portion of the complex to expand its campus. Today the complex is mostly medical in nature, with offices for UT Southwestern Medical School and Parkland Memorial Hospital. J.P. Morgan Chase has taken over Exchange Bank’s lobby and motor bank. Medical offices and a food court replaced the mall, but the original skylights and street of brick and concrete remain. 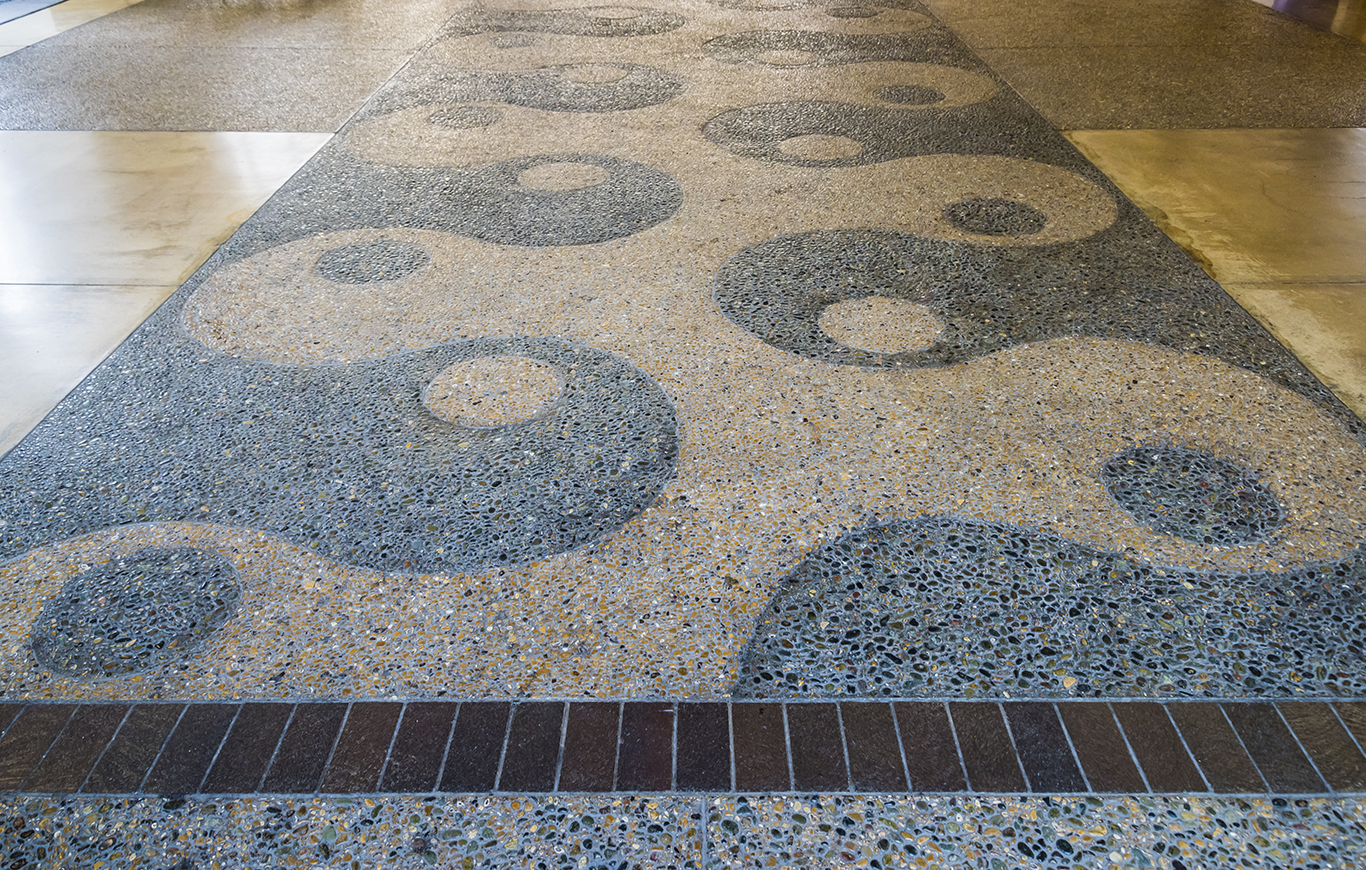 When Exchange Park opened, it was cutting edge for its mixed-use concept of office and retail and the architectural design with its sun shading system and modular office flexibility. In 1956, Architectural South magazine heralded Exchange Park as “an entirely new concept of the business community of the future — a city within a city, containing all of the facilities necessary to provide goods and services under the most favorable conditions — comfort and convenience without congestion.” While the complex was never completed, what did get built was groundbreaking and served as a model for development across the country.