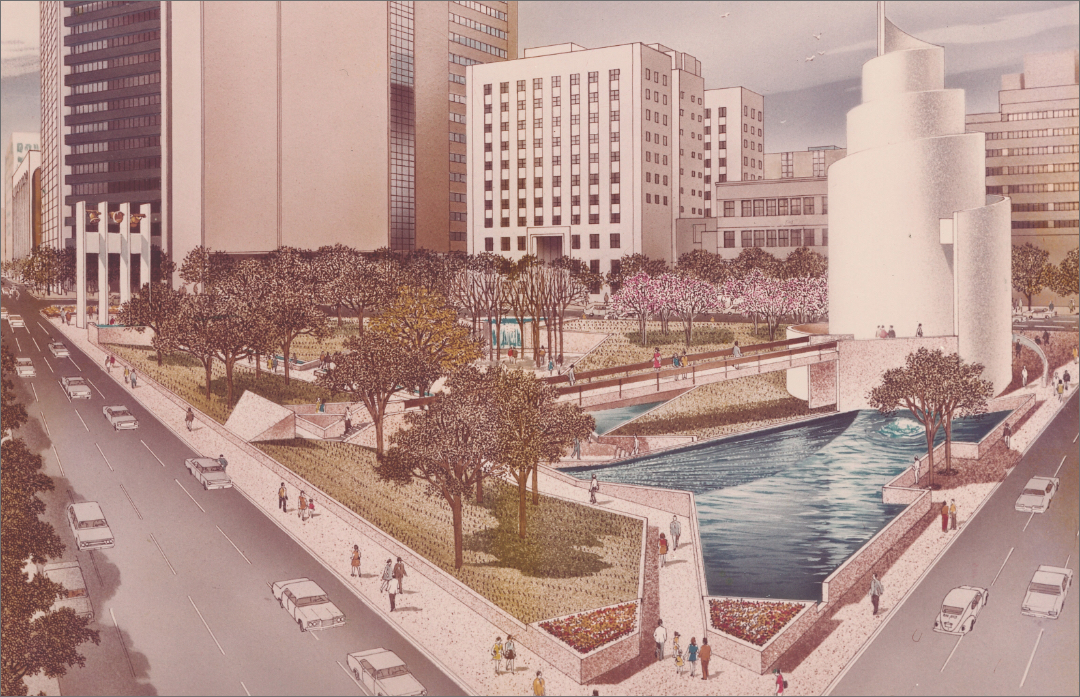 A place for serenity and contemplation is hard to come by in a bustling downtown like Dallas’. In 1977, Thanks-Giving Square opened to do just that. The unique design was integral in the goal of providing a place to escape busy life and draw inspiration from the worldwide practice of giving thanks.

As president of the Thanks-Giving Square Foundation, Peter Stewart was the driving force in the creation of Thanks-Giving Square. He and three other businessmen — Joe Neuhoff, Julius Schepps, and John Stemmons — wanted Dallas to have a public space dedicated in gratitude to God and to the tradition of thanksgiving. The foundation, formed to carry out that vision, entered into a public-private venture with the City of Dallas to transform a triangular block downtown into an urban oasis. 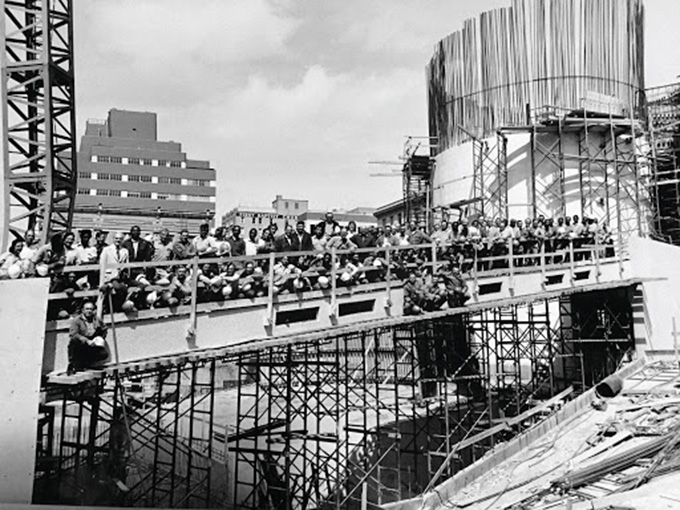 In 1968, the one- and two-story buildings in the block were purchased and demolished, and work began on the construction of the square in 1972. Early visions included a traditional nature-inspired park with wide promenades surrounded by lawns and shade trees with ponds, waterfalls, and a fountain. However, the design went in a different direction after Philip Johnson, FAIA was hired in 1971 to give life to the square. 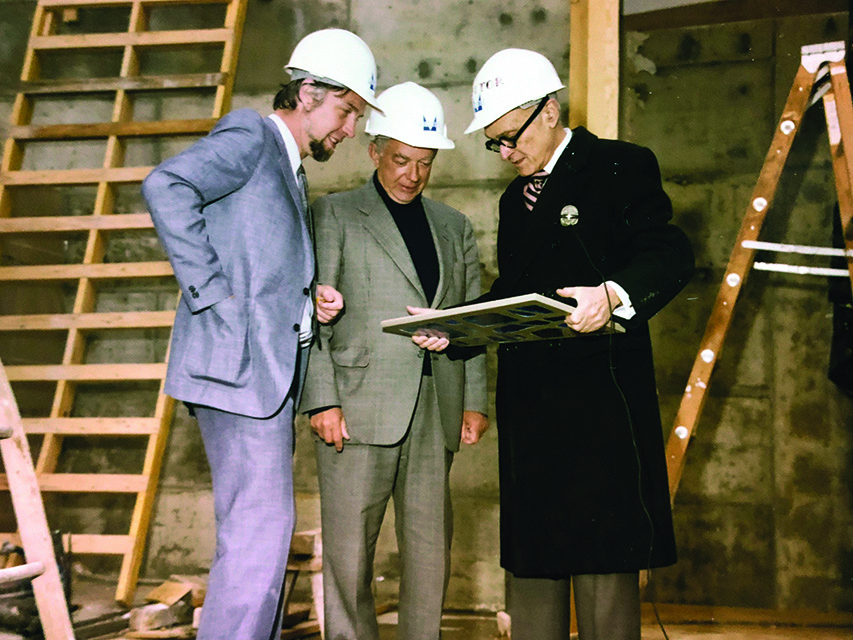 Philip Johnson, FAIA, inspecting a sample panel of the “Glory Window,” before it was installed in the Chapel of Thanksgiving, with Gabriel (center) and Jacques (left) Loire who created the window. / Photo: The Thanks-Giving Foundation

Johnson created a more controlled urban architectural design with angular concrete paths, walls, and water features. Shade trees and grass brought the greenery to balance the concrete surfaces. He designed a 90-foot-tall chapel as the focal point for the site, with a gleaming white surface to contrast with the greenery and the reddish sidewalks and walls. Sitting below the surface are two additional levels, one for a truck terminal and one for pedestrian tunnels.

As part of its involvement with the project, the city wanted a truck terminal under the park to remove service vehicle traffic from the street. The site was excavated 55 feet to create the Bullington Truck Terminal, a large open area for vehicles to maneuver, with loading docks for the buildings surrounding the square. The streets and terminal were connected by tunnels bored under the roads. 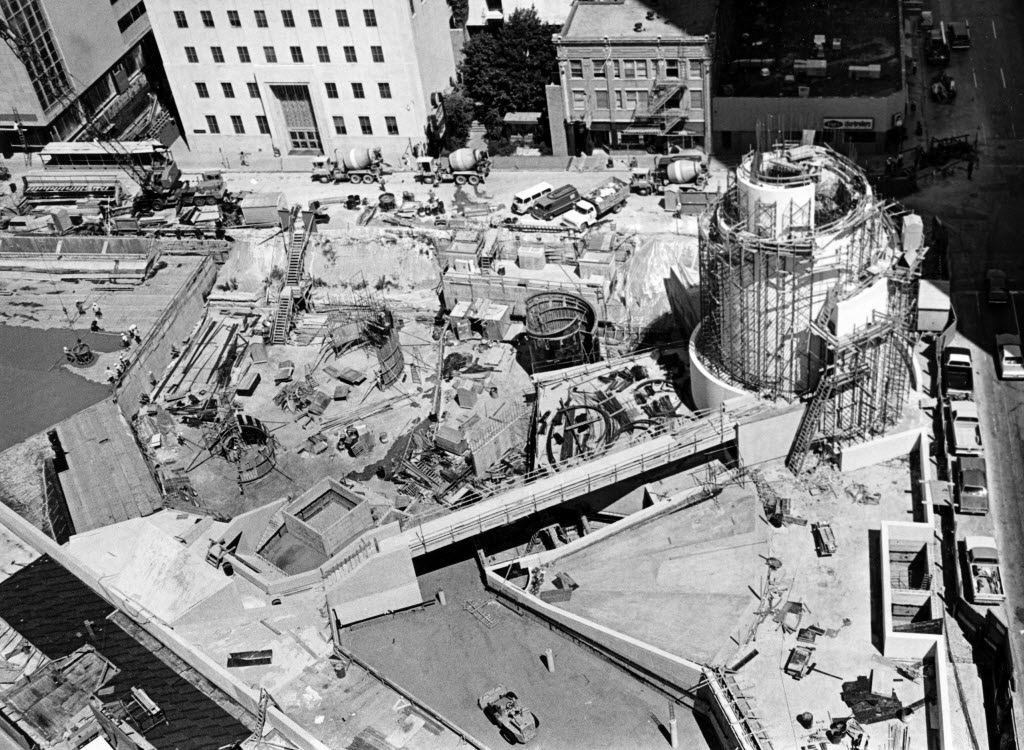 The level above the terminal is a portion of the downtown pedestrian tunnel system, which was part of City Planner Vince Ponte’s plan in the late 1960s to allow people to navigate downtown and access buildings without going above ground. Over two miles of the tunnel system, featuring shops and restaurants, were built; Thanks-Giving Square served as a major intersection. The system was successful for a time but fell out of favor as shops and restaurants left for the surface and the buildings above sealed off access to the tunnels.

Those two levels required extensive engineering, and Thomas Taylor, PE, Hon. TxA, of Datum Engineers was hired to figure that out. Taylor said that engineering the roof of the truck terminal was tricky because it required a substantial system to support the pedestrian tunnel and features of the square. Taylor also made sure the weight of the great sloping fountain next to the chapel was properly supported by a concrete slab to avoid the settlement and cracking of such a heavy system placed over soil fill.

Johnson designed the main entrance to Thanks-Giving Square at the intersection of Bryan Street and Pacific Avenue. There, passers-by are greeted by the Court of All Nations, featuring three large hanging bells cast for the site in France. Two fountain walls flank a gate to the square’s inner sanctum. 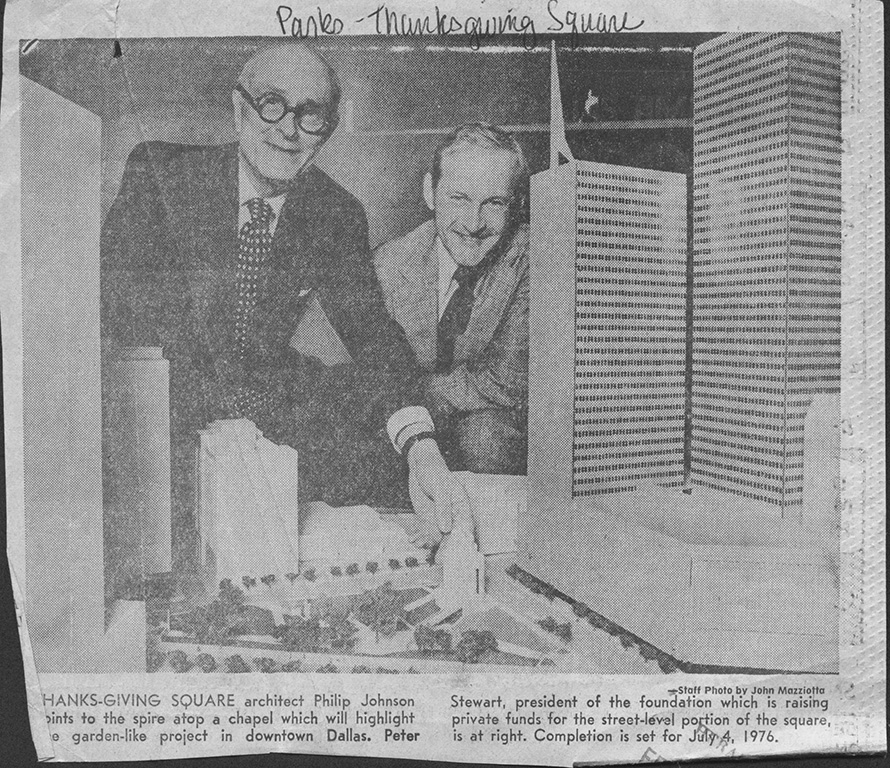 Johnson described the experience in the park in a 1975 speech this way: “As you enter from the west, you gradually, gradually go down a hill without knowing it. You gradually see streets disappear as the wall of green around you rises as you go down. Then the noise of water gets to be louder than the noise of traffic beyond the walls, and although you are in the heart of the city and see tall buildings, you get a sense of peace there that only can be found with water, leaves and people.” 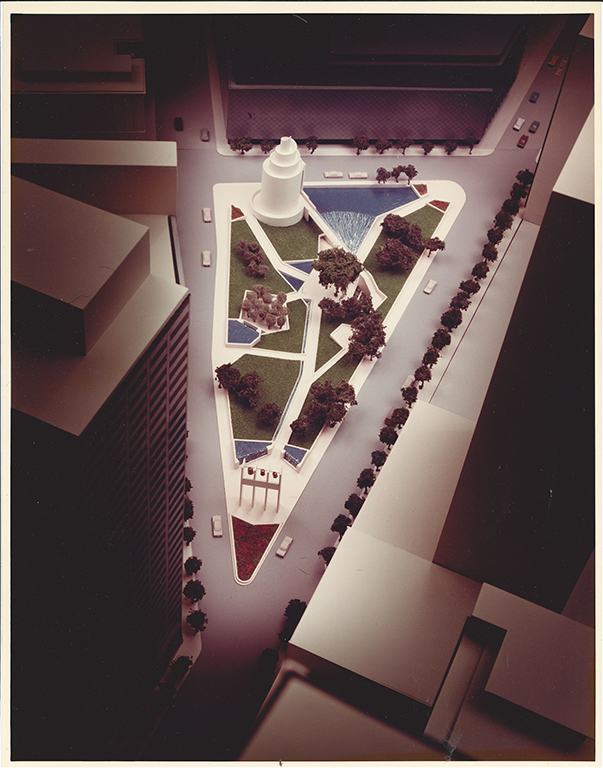 For the chapel, he wanted people to see it but for it to be hard to get to, like the Statue of Liberty. He felt visitors would be “calmed down mentally and spiritually” by the time they reached the front door. He created a procession to the chapel, with one set of steps taking people around a curve to another set of steps before reaching the 100-foot-long ramp, a solid piece of post-tension concrete two feet thick, to the chapel entrance.

As development of the site progressed, Johnson experimented with several locations and shapes for the chapel. He finally settled on placing it at the edge of Ervay Street and using a “spiral of life” design to symbolize traditions and hope. According to the foundation, it can also be “a scroll, a flame or a flower unfolding — the infinite up-reach of the human spirit saying, ‘Thanks be to God.’ ” The chapel floor sits above the level of the site and street, with a service level and the Hall of Thanksgiving below that includes office space, a small meeting space, and a museum that tells the story of Thanksgiving traditions in America. 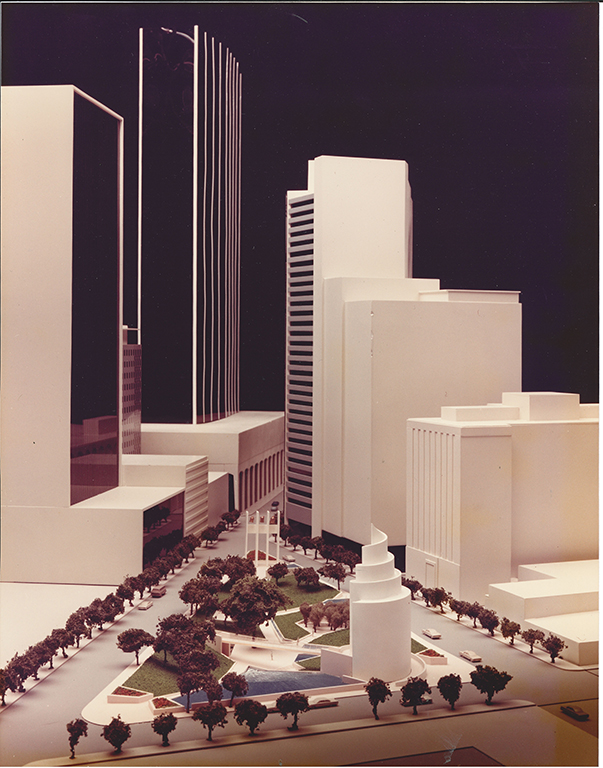 Even though the chapel is simplistic in appearance, the design was not. Thomas Taylor remembers using a slide rule to make the calculations to determine the amount of reinforcing steel needed and cross-checking them with the highest computer-powered system of the day — it took three separate programs to do the calculations. The chapel walls ended up 16 inches thick to hide the reinforcing steel for the poured-in-place concrete spiral. The walls are a mix of white cement and quartz aggregate with a bush-hammered surface to create texture. Even with the complex forming, Taylor said that the chapel went up smoothly, thanks to Manhattan Construction, the contractor on the project.

As the spiral rises to its pinnacle, between the walls is a stained-glass skylight called the Glory Window, created by French artist Gabriel Loire. It is one of the largest horizontally-mounted stained-glass windows in the world and creates a unique space on the chapel interior. There are 73 panels, made of faceted colored glass between resin, that bridge the spiral walls. The panels start out with shades of blue that represent peace, and the colors become brighter and warmer on the ascent, terminating in a beam of golden light. The progression is meant to “express life with its difficulties, its forces, its joys, its torments, and its frightening aspects.”

A walkway, framed by a low wall with a water rill to one side, leads down from the Court of Nations to the center square 15 feet below the street level. From there, people can access the chapel, the pedestrian tunnel or a small walled area several steps up with its own fountain. Next to the chapel and under its bridge is the Great Fountain, which starts at street level and slopes down in a triangular form as over 6,000 gallons of water continuously cascade over pink granite blocks of varying heights to give the water more movement and an audible quality. The concrete walks and walls throughout the site are concrete, with pink granite aggregate and a bush-hammered surface like the chapel. Green slopes of grass rise from the lower levels to the walls at the street level, with a mix of trees to shade the site. 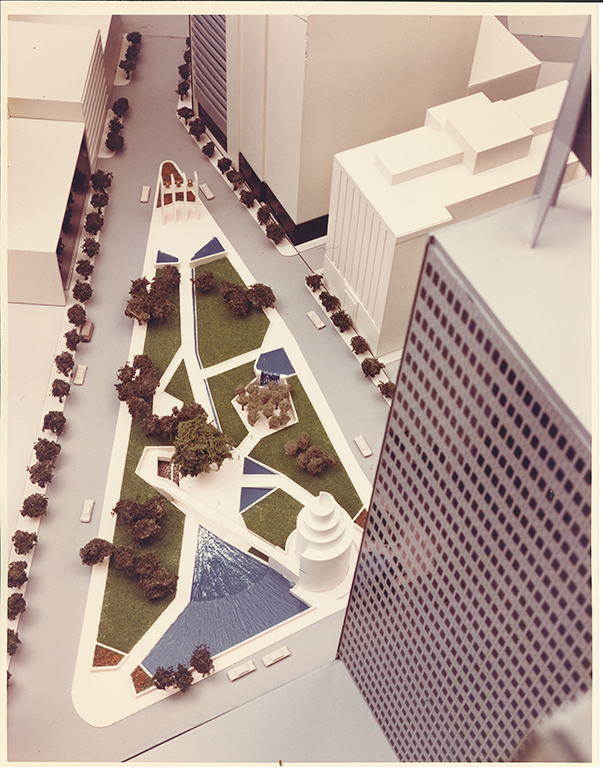 Several years ago, the Thanks-Giving Square Foundation began to study the issues with the aging site. Landscaping, fountains, site accessibility, and better integration with the neighborhood were identified as needing improvement. The foundation engaged Selzer Associates Inc. to help address the issues. John Brown, AIA of Selzer has been working closely with Philip Johnson Alan Richie Associates to figure out how to address the issues while staying true to Johnson’s original intent.

ADA access around the site and to the chapel is a major concern. Even the ramps throughout the site don’t meet the current slope standards. Brown said plans call for access to the chapel from the lower hall with a round glass elevator that will rise through a portion of the fountain to the chapel floor level. He is also working on expanding meeting space for the chapel and adding more restrooms, using a large storage space underneath the Great Fountain. The foundation would like to hold more exhibits, meetings and events at the site that the Hall of Thanksgiving doesn’t have the capacity to hold. Whatever is done to the site, Brown believes that it is a “place of relevance and importance for the community” that must be respected. 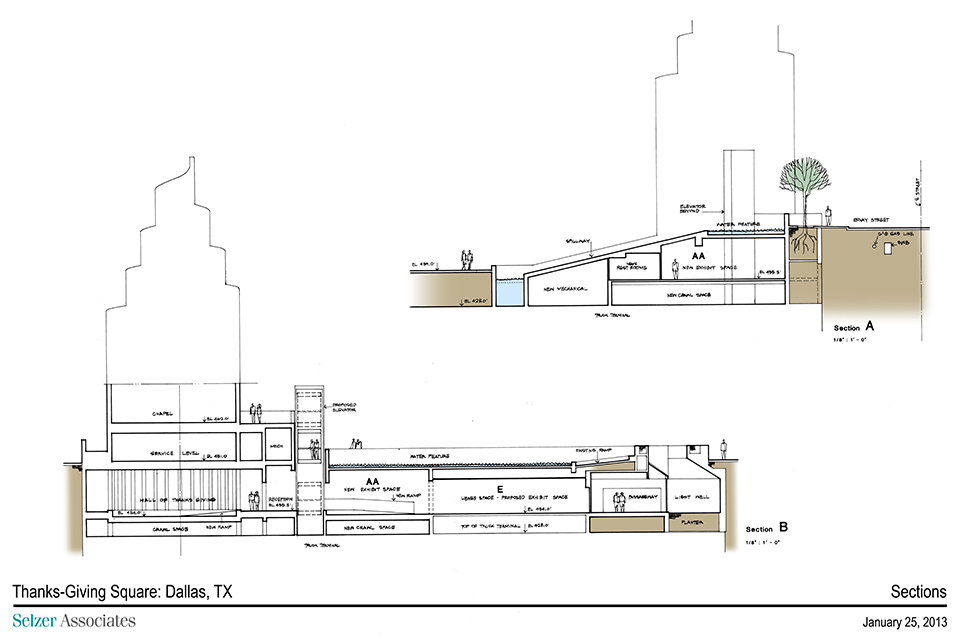 Thanks-Giving Square owes its design to two important individuals: Peter Stewart, who had the vision for the site, and Philip Johnson, whose architectural expertise made it a reality. Stewart worked closely with Johnson on all aspects of the design, and they remained friends long after the square’s completion. In fact, Johnson often returned to the site for various events.

Thanks-Giving Square has also seen all manner of religious leaders visit and countless ceremonies and meetings take place. The foundation’s goal is for Thanks-Giving Square “to serve as common ground where people of all cultures and religions are welcome.” President Gerald Ford recognized it as a “major national shrine.”

Thanks-Giving Square is an architectural masterpiece of its time, and Stewart and Johnson left Dallas with an iconic landmark that brings people of all faiths together in a spirit of thanking God.