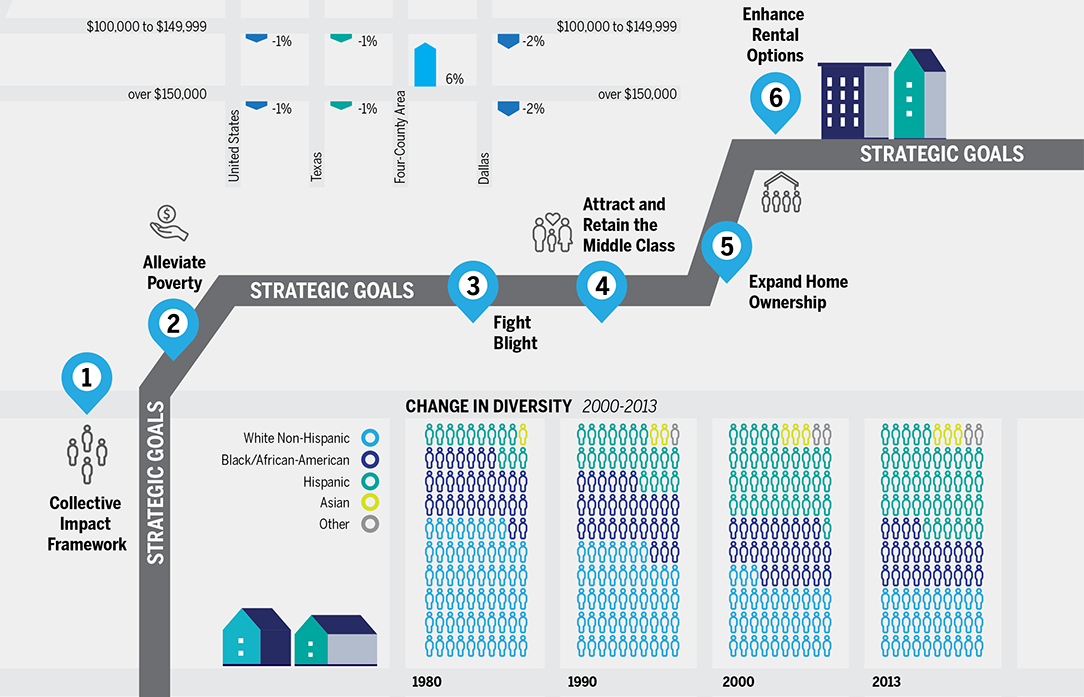 Neighborhood Plus: A Strategy Towards Equity for the Citizens of Dallas?

Compiled by Nate Eudaly, Hon. AIA Dallas, from a City of Dallas report and an interview with Alan Sims, chief of Neighborhood Plus for the City of Dallas

Dallas is the fourth largest metropolitan economy in the U.S. and the 12th largest in the world. This economic engine fuels rapid growth and that growth, in turn, powers a robust economy. However, not all residents of Dallas benefit from this. The number of poor people in Dallas rose by 41% between 2000 and 2012.[1] This percentage far outweighs the city's concurrent 5% population growth. Based on a recent report by the Mayor’s Task Force on Poverty, Dallas has the highest child poverty rate in the United States among cities larger than 1 million people. Two of every five kids in Dallas grow up poor. Dallas also has the third highest poverty rate (counting both children and adults) among large cities in the U.S.

“It’s not acceptable for a city as full of wealth and opportunity as Dallas to be ranked [as the] third poorest urban center in the United States,” says Larry James, CEO of City Square who chaired the Mayor's Task Force. Dallas Mayor Mike Rawlings says that Dallas has a "barbell economy," meaning it’s stretched thin in areas (bar) and ample in others (bells). He says, “We’re a very rich city. We’re very wealthy. We’re very blessed. At the same time, we have an extreme amount of poverty.”

Although there are certainly no magic bullets to bring equity to every neighborhood and for all individuals who reside in Dallas, the city’s Neighborhood Plus initiative is designed to implement a neighborhood revitalization plan that will promote healthy, sustainable neighborhoods throughout Dallas. The Neighborhood Plus concept embraces the unique identity and strength of each community, but the City of Dallas must implement the plan based on the differing needs and priorities of the residents of the unique communities. Building partnerships that connect housing with education, health, transportation, and economic empowerment can make real and lasting change in the lives of residents throughout the city.

The Purposes of Neighborhood Plus

Increase collaboration and planning coordination among neighborhood organizations, governmental agencies, nonprofit service providers, and philanthropic funding organizations to leverage resources and enhance effectiveness instead of having them operate in “silos” with little communication as has frequently occurred historically.

Focus on increasing earnings for low wage earners, targeting and expanding workforce training, prioritizing Pre-K education opportunities for children in poverty, addressing homelessness, and fostering transportation, child care and health programs to improve the quality of life of people living in poverty. Dallas also suffers from geographic disparities in educational attainment that perpetuate poverty. Ensuring all neighborhoods can readily access high-quality education will benefit the city as a whole and will serve as an important step toward minimizing poverty in the city.

Work to identify and target blighted properties more strategically and effectively to eliminate their negative impact on neighborhoods and return them to productive use.

4. Attract and Retain the Middle Class

Work to raise the quality of rental housing through better design standards and proactive and systematic code enforcement. Expand affordable housing options and encourages its distribution across the city and region.

Will Neighborhood Plus Really Work?

Dallas has historically lacked a cohesive neighborhood planning framework. Further, since many areas of the city have lacked organized neighborhood representation, residents often have not had a platform from which to articulate and advocate for their needs at the neighborhood scale. Neighborhood Plus is intended to foster partnerships and neighborhood engagement to prioritize issues and effectively address them.

Alan Sims assumed the position of chief of Neighborhood Plus for the City of Dallas on October 1, 2015. Shortly thereafter, in an article in D Magazine titled “The Worst Job in Dallas,” Eric Celeste opined: “All Alan Sims has to do is merge a decade of Dallas’ dumbest ideas and then fix housing, poverty, health, schools, and everything else you can think of.” 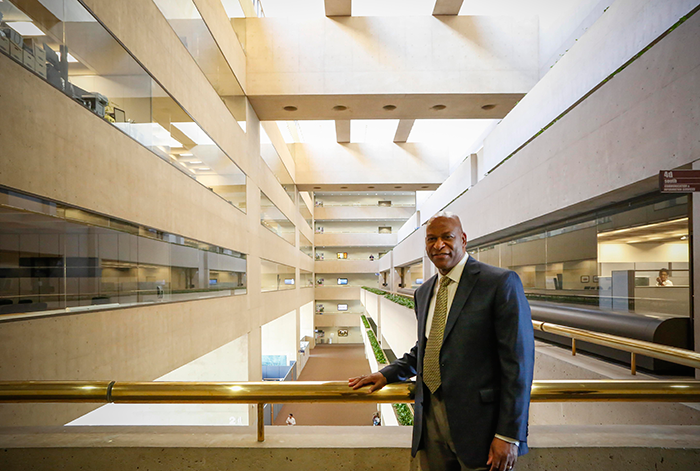 Sims chuckled when he and I discussed this during my visit with him shortly before the anniversary of his first year on the job. Sims sees Neighborhood Plus as a “comprehensive strategy to revitalize and strengthen sustainable neighborhoods across the City of Dallas.” To achieve program goals, Sims engaged each of the Dallas’ City Council representatives to design plans for their respective districts, recognizing that each has distinct needs and priorities. The council members identified Target Areas and then identified primary concerns in each. Then, Target Area teams were established, and the Neighborhood Vitality team at the city analyzed data for every Target Area.

Working with each council person and representatives from their districts, Sims, his team, and the district representatives targeted one neighborhood per district as an initial focus. Those neighborhoods are Arcadia Park, Bonnie View, Coit/Spring Valley, Greater Casa View, Pemberton Hill, Pleasant Grove, Elm Thicket-NorthPark, Red Bird, The Bottom, Family Corridor, and Vickery Meadow.

Metrics were developed to measure how effectively each target area is in developing stronger neighborhoods. Although the metrics vary by neighborhood, areas of focus include lower crime (safer neighborhoods), lower code enforcement complaints, higher satisfaction with city services, higher property values, the increase in quality of life, and the identification and development of community leaders. The internal city teams serving on each of the neighborhood teams include representatives from each of these departments: the police, code enforcement, neighborhood vitality, economic development, community prosecution, and infrastructure (streets, sidewalks, storm drainage, and water and sewer).

Each council member also selected constituents from their district’s target area to form an advisory committee to ensure community engagement. Using the data outlined in the infographic, the advisory committee and the city’s representatives discussed what priority issues faced that area. Subsequent meetings with the community at large were held over several months. From these discussions, the council members, in concert with the city staff and their district’s advisory committees, identified action items for rapid response. Per Sims, these items attack immediate needs, are tactical, treat symptoms, can be achieved with limited planning, deploy existing operational resources and consider available city resources.

Neighborhood Plus offers strong potential for addressing equity issues that impact the citizens of Dallas. Under Sims’ leadership, an initial framework has been developed that recognizes different needs between the city’s council districts, and the neighborhoods within those districts.

Short term, the Rapid Response Priorities can be achieved as long as the council representatives, mayor, city manager, and city staff continue to support and work collaboratively with constituents.

The Long-Term Transformation goals will be more challenging to achieve. There is intense financial pressure on the city because of basic infrastructure maintenance needs, a hemorrhaging police/fire pension fund, and growing poverty. While addressing these financial issues, the citizens and leadership of Dallas, joined by the business and community partners, must prioritize transformative plans across the neighborhoods of Dallas.

Neighborhood Plus holds promise as a vehicle for achieving increased equity for the citizens of Dallas. If Dallas’ governmental, civic, and business leaders provide increased focus and support for its long-term goals, we may see that promise achieved.

[1]  The U.S. Census Bureau poverty rate measures the percentage of people whose income fell below their assigned poverty threshold. Poverty thresholds are assigned to individuals or families based on family size and composition. For 2015 (the latest year’s data available) that threshold for a family of two adults and two children was $24,036. For a family with one adult and two children the rate was $19,096.