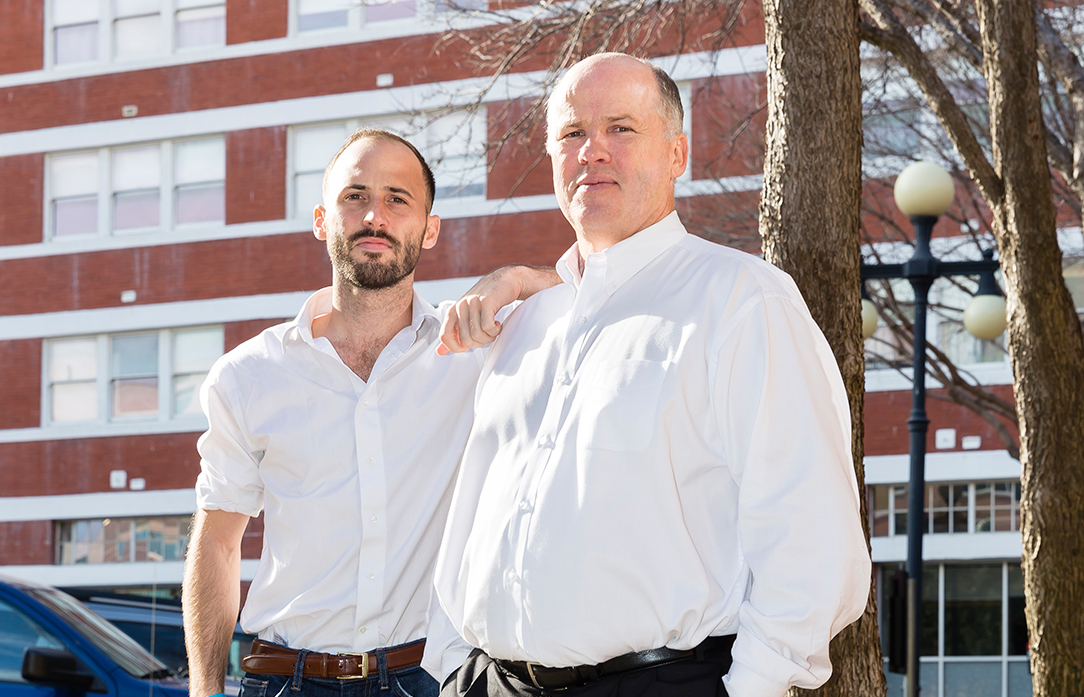 Matthews Southwest (MSW) has transformed the south side of downtown Dallas. Its positive impact on our urban fabric is most evident on Lamar Street south of I-30, where nearly every building on the 45 acres has been built, re-developed, or made possible by Jack Matthews and his team, which now includes his son, John Matthews. MSW also developed the Omni Dallas Convention Center Hotel and The Tribute, a 1,500-acre mixed-use community on Lake Lewisville in The Colony. The firm’s largest project is The Bow, a 2-million-square-foot headquarters designed by Foster + Partners for Encana Corporation in Calgary, Alberta, Canada. Nate Eudaly, Hon. AIA Dallas visited with Jack and John to learn more about how these two visionary leaders from two generations have shaped Dallas—and what they hope to achieve going forward. 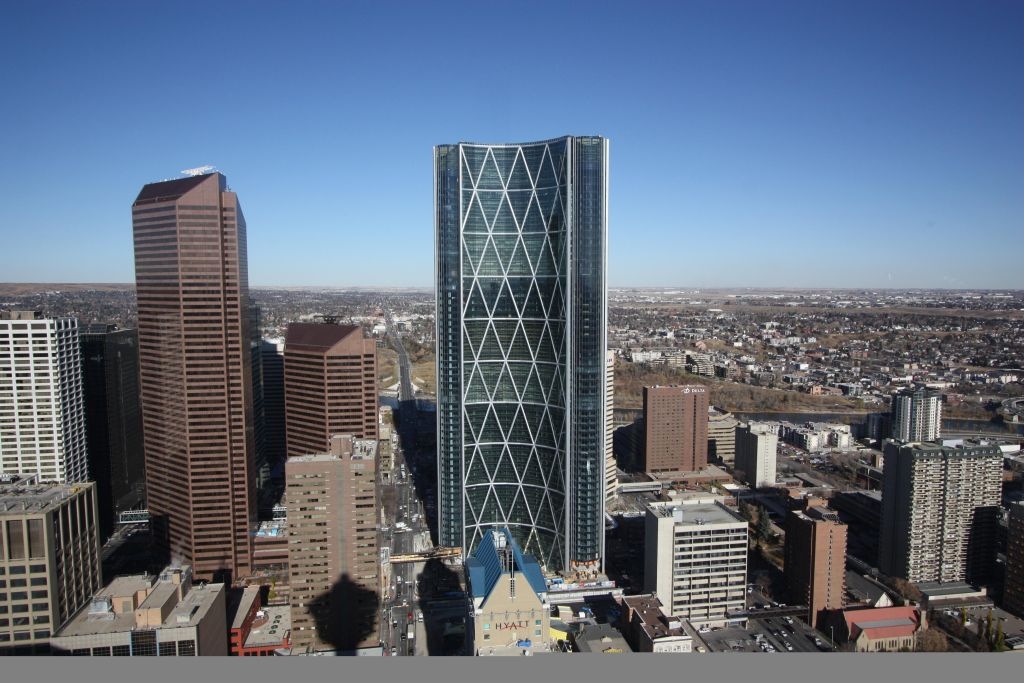 WHERE DID YOU GROW UP? WHAT ACTIVITIES DID YOU ENJOY? HOW DID YOU START IN THE REAL ESTATE DEVELOPMENT BUSINESS?

JACK: I was born and grew up in London, Ontario, Canada. I played football and hockey, ran cross-country and wrestled. At 16, I began working for my father’s construction company, and then attended the University of Western Ontario, where I earned an undergrad degree in economics and an MBA. I joined my family’s construction company while finishing my degree and I became president of the firm at
age 27. In 1988, I founded Matthews Southwest to provide an American presence in the development business.

JOHN: I grew up in Dallas, played hockey, and attended SMU. I had an aptitude for math, and taught algebra in Mississippi for several years. I then worked on staff with Teach for America. About four years ago, I joined Matthews Southwest.

WHEN STARTING MSW, WHY DID YOU SELECT DALLAS INSTEAD OF HOUSTON OR ANOTHER U.S. CITY?

JACK: I was given the task of finding a place to invest about half of the company’s assets. I was asked to find a market that spoke the same language, had pretty much the same business ethics, and was a direct flight away. I looked at a number of cities, but Dallas seemed to have the best prospects for growth and its economy was more diversified than Houston’s, so I chose Dallas. [South Side on Lamar was one of MSW’s initial hallmark projects. To Jack, the opportunity to buy the historic Sears building on Lamar Street was compelling from the start, as it helped transform the area. MSW recently announced that it has also bought the Dallas High School building at Pearl and Bryan streets. The property—also known as Crozier Tech—has been vacant since the 1990s. The plan is to convert the 6-acre property on the eastern edge of downtown Dallas into a mixed-use project starting with office and retail space.] 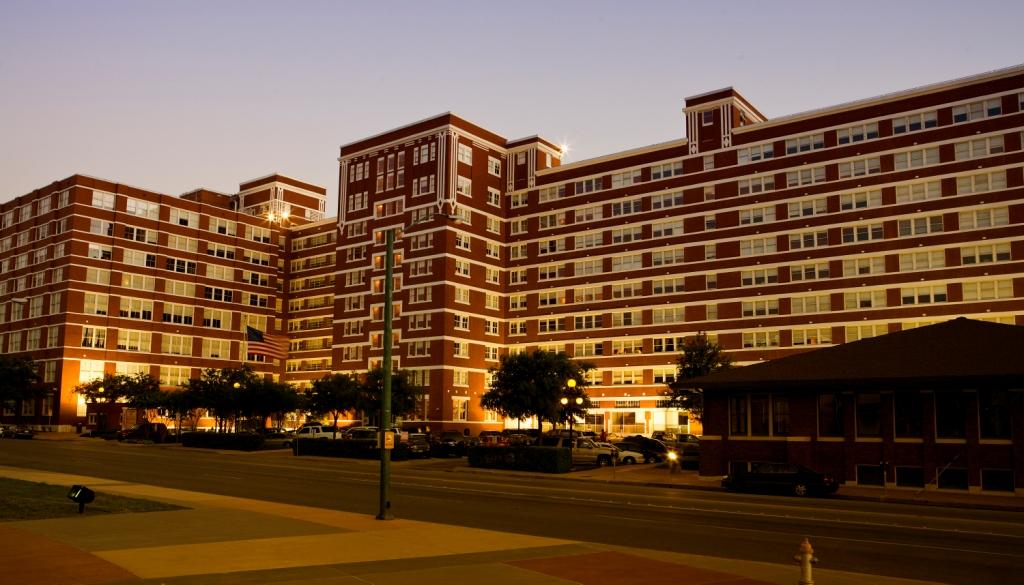 WHY DID YOU BUY CROZIER TECH AND WHAT ARE YOUR OBJECTIVES FOR THE SITE?

JACK: The history of the place and all the connections to people—it was interesting to me. From a business point of view, it is 5.4 acres of land in downtown Dallas, which is a rare opportunity. I hope to bring the high school back to its former glory with some great office space and to also create a public space where people can gather in restaurants and attractive retail. The site offers some good opportunities for additional buildings, but those designs will be respectful of the original design of the high school.

HOW CAN THE GREATER DALLAS AREA CREATE A MORE LIVABLE URBAN ENVIRONMENT?

[Sustainable urban design is important to MSW. The NYLO Dallas South Side was redesigned so that the 102 year old building received LEED Gold certification—the first historic hotel in Dallas to receive this rating. Matthews Southwest and architects 5G Studio Collaborative worked together to renovate the structure in order to attain the designation. The Omni Convention Center Hotel also received LEED Gold certification. Matthews Southwest makes it a priority to create projects that enhance their neighborhoods and respect the surrounding environments.]

JOHN: We are doing a lot of the right things. Some examples are Better Blocks, developing the urban core, and the work here on South Side. We need to increase density throughout Dallas. The CityDesign Studio and the Urban Design Peer Review Panel are key elements to achieve this, and I think this is a priority for the younger generation of Dallas residents. 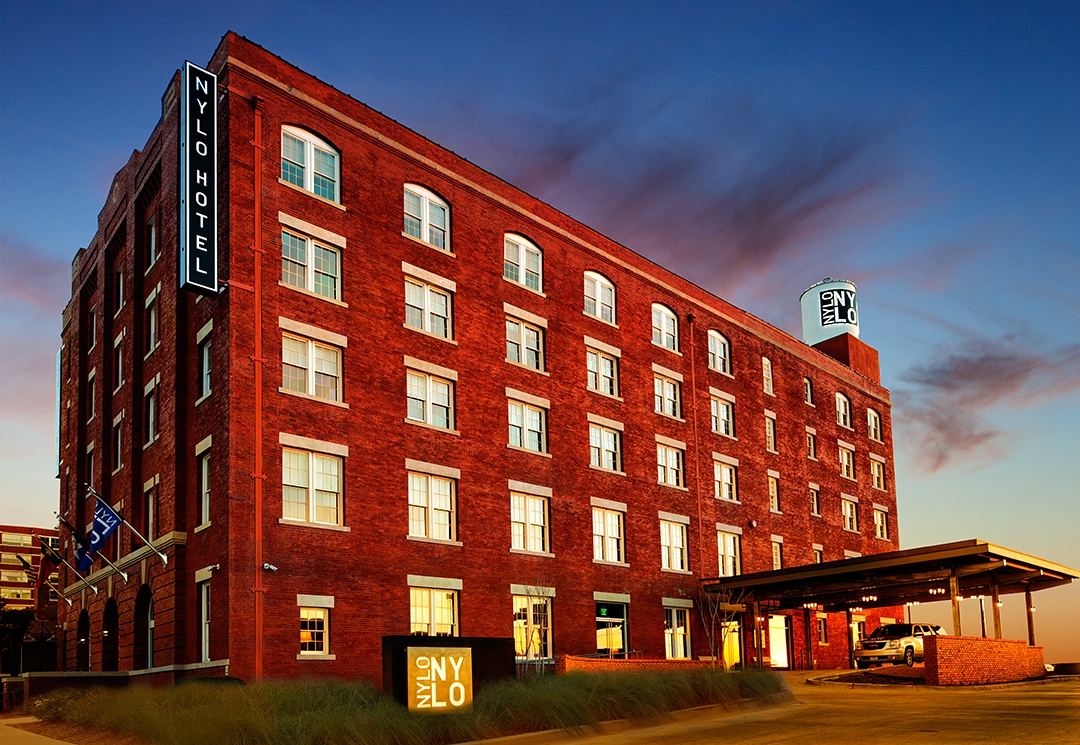 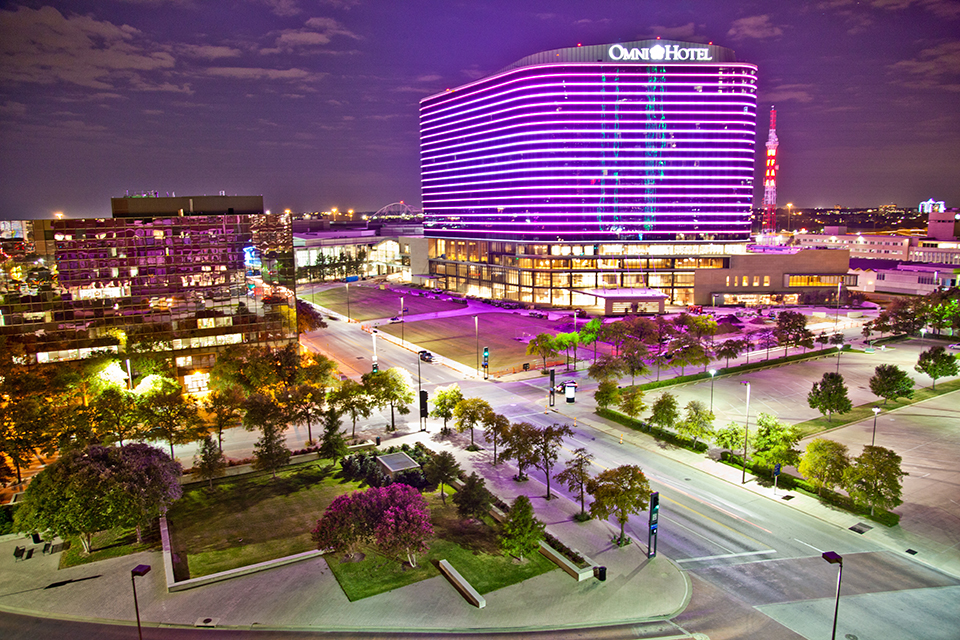 WHAT WAS YOUR MAIN MOTIVATION IN HELPING TO FUND THE PEGASUS RENOVATION?

[Pegasus has been an iconic Dallas symbol since the flying red horse was installed atop the Magnolia Building in 1934, two years before the Texas Centennial. Today the Pegasus atop the Magnolia is a replica, installed in 2000. Jeff West, former director of the Sixth Floor Museum, worked with MSW before his passing in 2012. He suggested that MSW should help restore the original Pegasus. Jack agreed and provided key funding for the project, which now sits on an oil derrick near the entrance to the Omni.]

JACK: It was the right thing to do. I did it as a tribute to Jeff and to give the city a present that is such an integral part of its history. 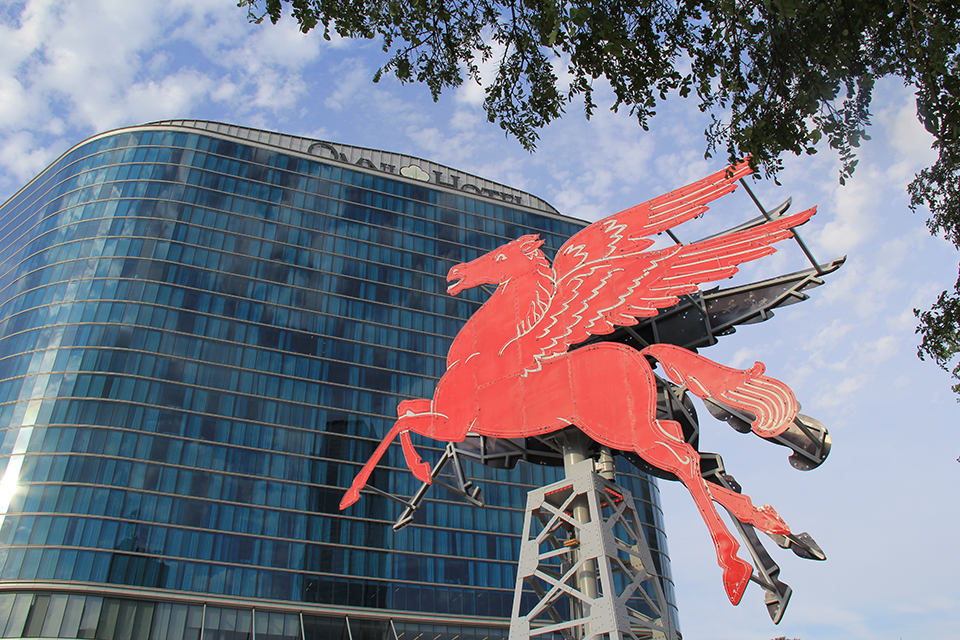 WHAT ARE SOME OPPORTUNITIES FOR THE FUTURE GROWTH AND DEVELOPMENT OF DALLAS?

JACK: The Texas Central Railway, which will establish high speed (bullet train) service between Dallas and Houston is very exciting. The chance to catch a train from Dallas mid-morning and be in Houston before lunch is amazing and will greatly facilitate business for the state. It will also spur development for both cities.

JOHN: One project that I am focused on is the Water Gardens at The Rivers, which is a water reclamation project along the original path of the Trinity River. MSW was pleased to give a grant to help with phase one of the project, and phase two is scheduled for this spring. As envisioned, it will add to the flood control ability of the Trinity River and clean the water to create a city boardwalk-like park, an idea originally conceived during The Connected City Design Challenge. The City Design Studio and a number of City of Dallas departments are involved with the proposed plan.

WHAT ACTIVITIES TAKE THE MAJORITY OF YOUR TIME? WHAT IS A TYPICAL DAY FOR YOU?

JACK: I travel a lot for work, usually about three trips a month. I don’t have “typical” days, but I may be in over 10 meetings and conference calls during the day.

JOHN: I spend a lot of time in the office working on planning and analysis, much of that on the computer and the web. I normally will make one business trip a month to Canada related to our projects there.

HOW DO YOU RECHARGE? WHAT DO YOU DO WITH YOUR LIMITED SPARE TIME?

JOHN: I practice yoga, play hockey, and also like to hang out with friends. I enjoy going to concerts since I like a wide genre, including Indie and experimental music.

WHAT SPARKS YOUR CREATIVITY?

JACK: I like challenges. I enjoy the process involved in finding the right solution to those challenges.

JOHN: Problem-solving, using lateral thinking to find eloquent solutions. Often we need to fit square pegs into round holes, and I like to use conversations with others and journaling to arrive at the best solution. 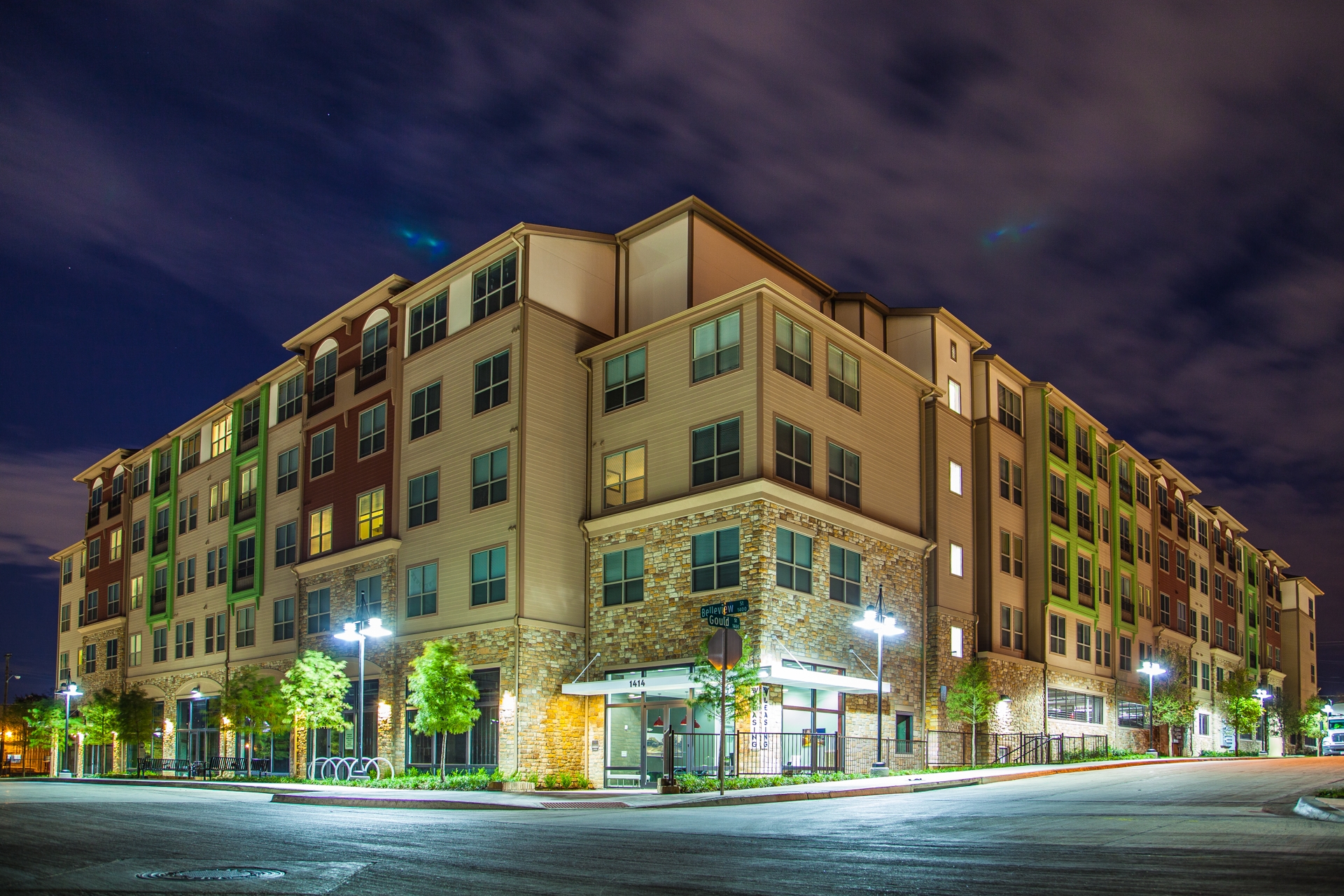 WHAT ADVICE WOULD YOU GIVE A YOUNG PERSON CONSIDERING A CAREER IN REAL ESTATE DEVELOPMENT?

JACK: I’m a long-thinking person. If someone were impatient trying to do what I do, they would not have a lot of fun. This business is not for everyone. You need to have vision and be patient. I have learned not to chase deals, but to work on the deals that are right for me. A good understanding of finance, architecture, and the political environment are all important in this business.

JOHN: There is a steep learning curve in this business, and gaining an understanding of all of the facets involved in development is essential. Be willing to take the time to become successful.