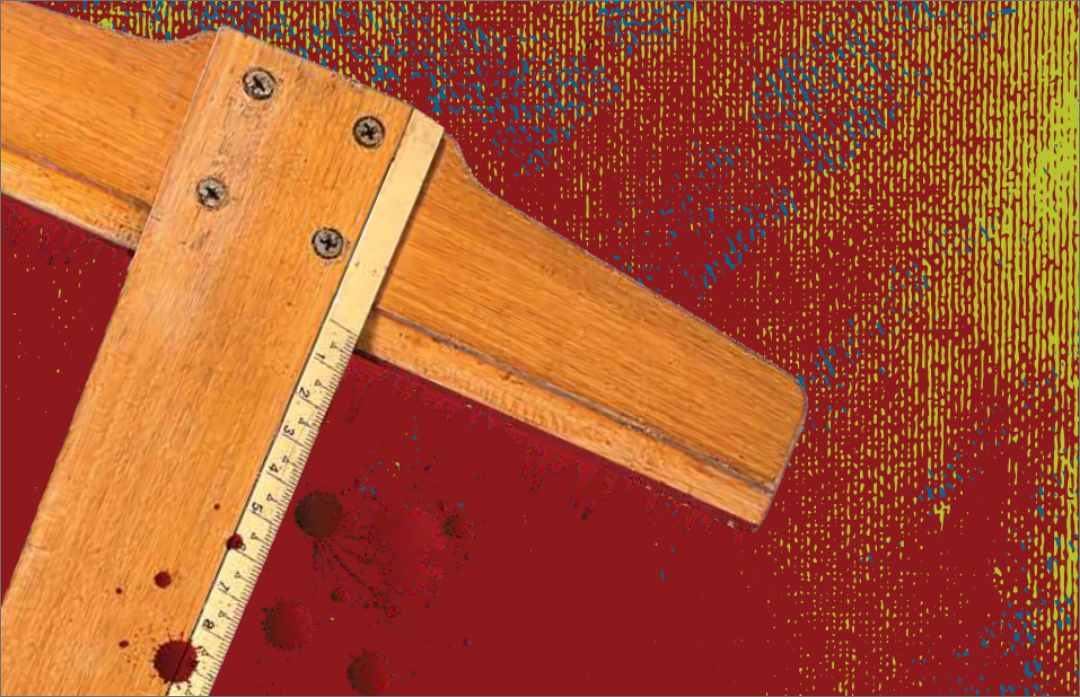 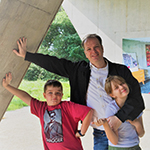 The Bloody T-Square: The Enduring Appeal of Personalized Justice in Death Wish

For as long as movies have needed a reliably likable protagonist, architects have proved to be a convenient choice. People see architects as embodying admirable qualities such as responsibility, sensitivity, passionate determination, even romantic idealism. But in 1974, a different architect hero emerged who showed a cold-blooded, vengeful side. Death Wish, a vigilante drama produced by Dino De Laurentiis and starring Charles Bronson, was a surprise box-office sensation.

Although made on a shoestring budget and thoroughly panned by critics, the film caught moviegoers’ attention for its critique of the explosive growth in crime and the inadequacy of law enforcement at the time. Audiences seemed to connect to the story at a primal level, where beliefs on when violence is justified are murky. Death Wish also laid bare humans’ deep longing for order and how they respond to disorder as individuals.

As with most movies, occupation is a device to ground a character in reality and make the person more accessible to audiences. Death Wish continues this practice with protagonist Paul Kersey, a New York City architect whose wife is murdered and daughter assaulted. Kersey works for a large commercial real estate developer as chief designer, and his bosses are happy to help him grieve by assigning him a project in Tucson, Arizona, away from the stresses of the big city.

Upon arriving in Tucson, Kersey learns about the joys of rugged individualism and shooting guns at the range from his client. He experiences a transformative moment that causes to him to abandon his pacifist ways (he was a conscientious objector during the Korean War) and returns to New York with an approved architectural scheme and, most important, a newfound desire to mete out justice on his own terms through the barrel of a revolver.

With the plot focusing on his exploits in shooting random hoodlums who harass him, the scenes of Kersey at his day job become rare. The city’s violent crime rate improves, thanks to his solitary vigilante efforts. This complicates the position of police and city leaders, who are grateful for the drop in crime but uncomfortable about press mentions of vigilantism because it further erodes their public standing. After finally uncovering that this mild-mannered architect is responsible, the city leaders broker a deal guaranteeing that Kersey escapes police custody so long as he permanently leaves New York. He flees for Chicago, but he is a changed man as he quietly shares his pride with the audience that he can quickly eliminate those who prey on the weak. 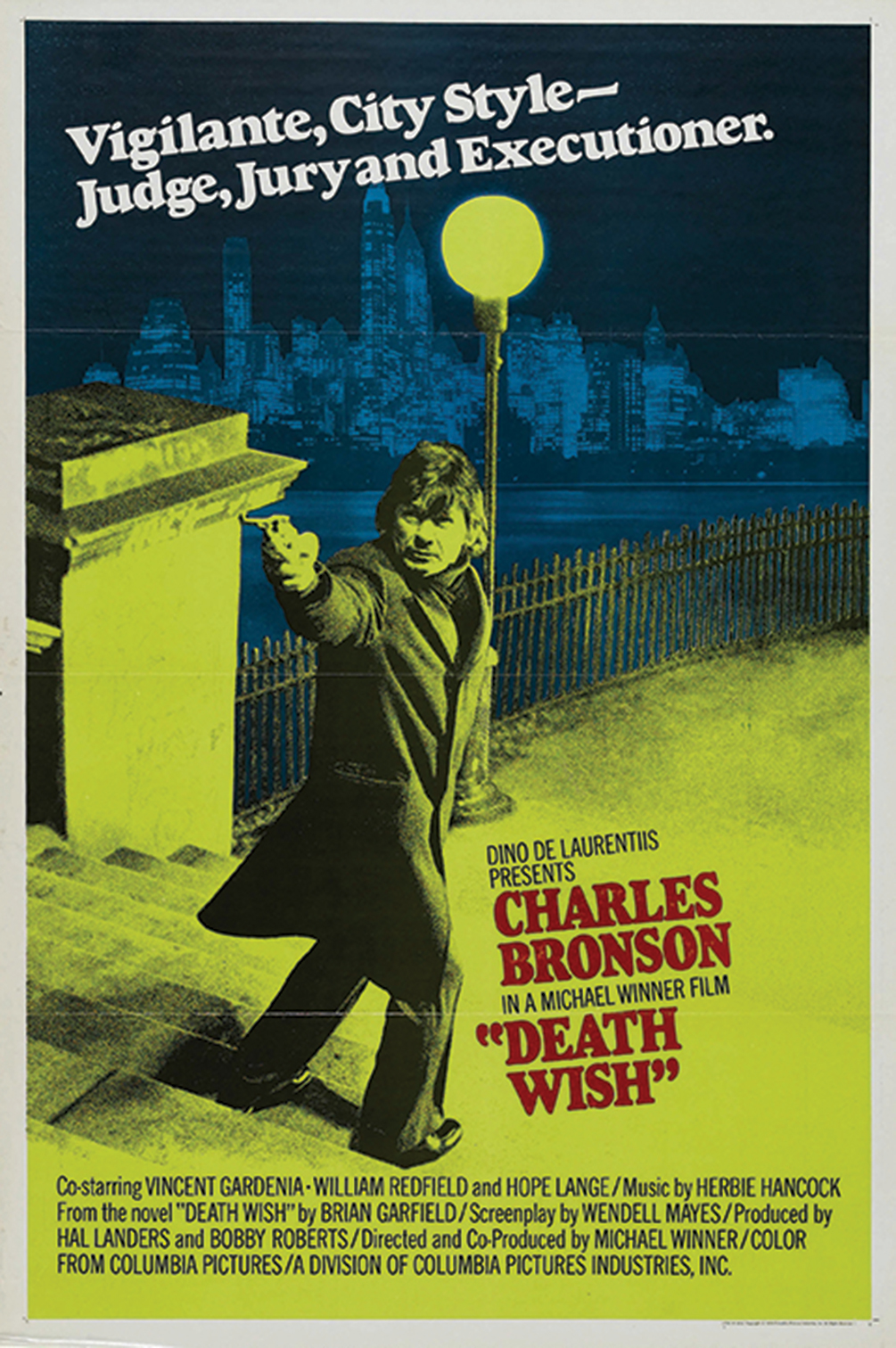 The success of Death Wish spawned four sequels, all starring an aging Bronson as Kersey. These later installments were produced by Cannon Film Group, an independent studio that released numerous 1980s low-budget, action-oriented titles that catapulted the careers of stars such as Chuck Norris and Jean-Claude Van Damme. Other than their increased use of gratuitous violence and nudity, the Death Wish sequels follow a similar story arc to the original: Kersey’s quiet life is disrupted by random acts of violence on his family and friends, and he seeks justice by reprising his vigilante role before being allowed to flee by law enforcement.

Each installment features a different set of bad guys, from youth gangs (Death Wish 2 and 3) to drug cartels (Death Wish 4) to the Mafia (Death Wish 5). All installments except for Death Wish 3 mention his job as an architect, complete with scenes featuring drafting tables, blueprints, renderings, and models. Bronson’s final film, 1994’s Death Wish 5, sees him settle down as an architecture professor. In a 2018 reboot, 15 years after Bronson’s passing, Bruce Willis took on the role of Kersey, this time as a doctor.

So why was it important to portray Kersey as an architect? Maybe it is because architects are associated with humans’ yearning for order and control of their environment, something the urban settings of the Death Wish series lack. In the first and third installments, New York, whose skyline constitutes one of the world’s greatest architectural achievements, is subsumed by rampant crime and decay. It closely mirrors the rapid rise of crime in New York and other American cities from the late 1960s all the way to the mid-1990s. The second and fourth films are set in Los Angeles, portraying a glamorous and modern California lifestyle as the city struggles to conceal an underworld of violent gangs and drug cartels. The entire series pivots on the tension between a glorious built order brought about human creativity and the fearsome collapse of social order.

Who better than the architect to stand in as the everyman champion for order, both in the physical realm and in society? The public assumes that architects solve problems of order by determining how people should occupy space harmoniously, guided by a genuine desire for beauty and goodness. Compared to other common movie and television archetypes, architects are driven by noble ideals that transcend the motives for law and justice among cops and detectives and lawyers, the preservation of life over death among doctors, the devious opportunism of businessmen, or the values of honor and loyalty that govern mobsters.

Architect is an unusual choice for a violent crime drama, but going outside the archetypes makes Death Wish’s paramount question to the audience — “What if this happened to you and what would you do if law enforcement isn’t around to help?” — more relatable to viewers who most likely aren’t lawyers, cops, doctors or mobsters. The decision to turn Kersey into a doctor, a stock character, might partly explain why moviegoers largely ignored the 2018 version.

Though at times entertaining, the relevance of Death Wish over last five decades does not lie in its artistic merits. Rather, the movie and its sequels challenge our beliefs about justice and the role of the individual in maintaining social order. The series reminds us that although we are heavily invested in making great places, those efforts are only as successful as our ability to suppress social chaos. And that sometimes, the most unlikely individuals, even the most idealistic, may take it upon themselves to do the bloody deed of suppression.

Julien Meyrat, AIA is an associate at Gensler.